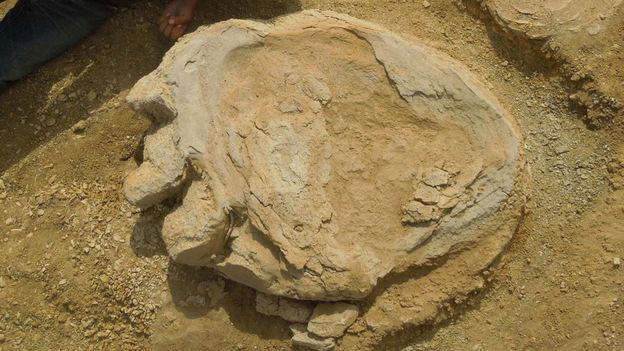 The footprint measures 106cm (42in) in length and 77cm in width. Photo Credit: Okayama Uni/Mongolia Academy of Sciences/BBC.
News: Mongolia
Giant print could offer insight into dinosaur behaviour
As well as its walking patterns
by Archaeology Newsroom - Friday, 7 October 2016

One of the largest dinosaur footprints found in the Gobi desert might shed light on titanosaurus behaviour.

The footprint was found in August at a geological stratum formed 70 to 90 years ago. It measures 106x77cm and researchers think it is of a titanosaurus. The titanosaurs were giant herbivores with long necks, possibly more than 30 metres long and 20 metres tall. Scientists hope that a discovery of another footprint after further research might help them comprehend the animal’s walking pattern. They may also manage to calculate the speed of its movements.

Three other footprints from different dinosaur species were found at the site as well. Researchers hope that further research will help them better understand the dinosaur’s social behaviour, since all footprints, although of different species, seem to be heading to the same direction.

The discovery was made by a team led by Shinobu Ishigaki, professor of palaeontology at Okayama University, in collaboration with the Mongolian Academy of Sciences.