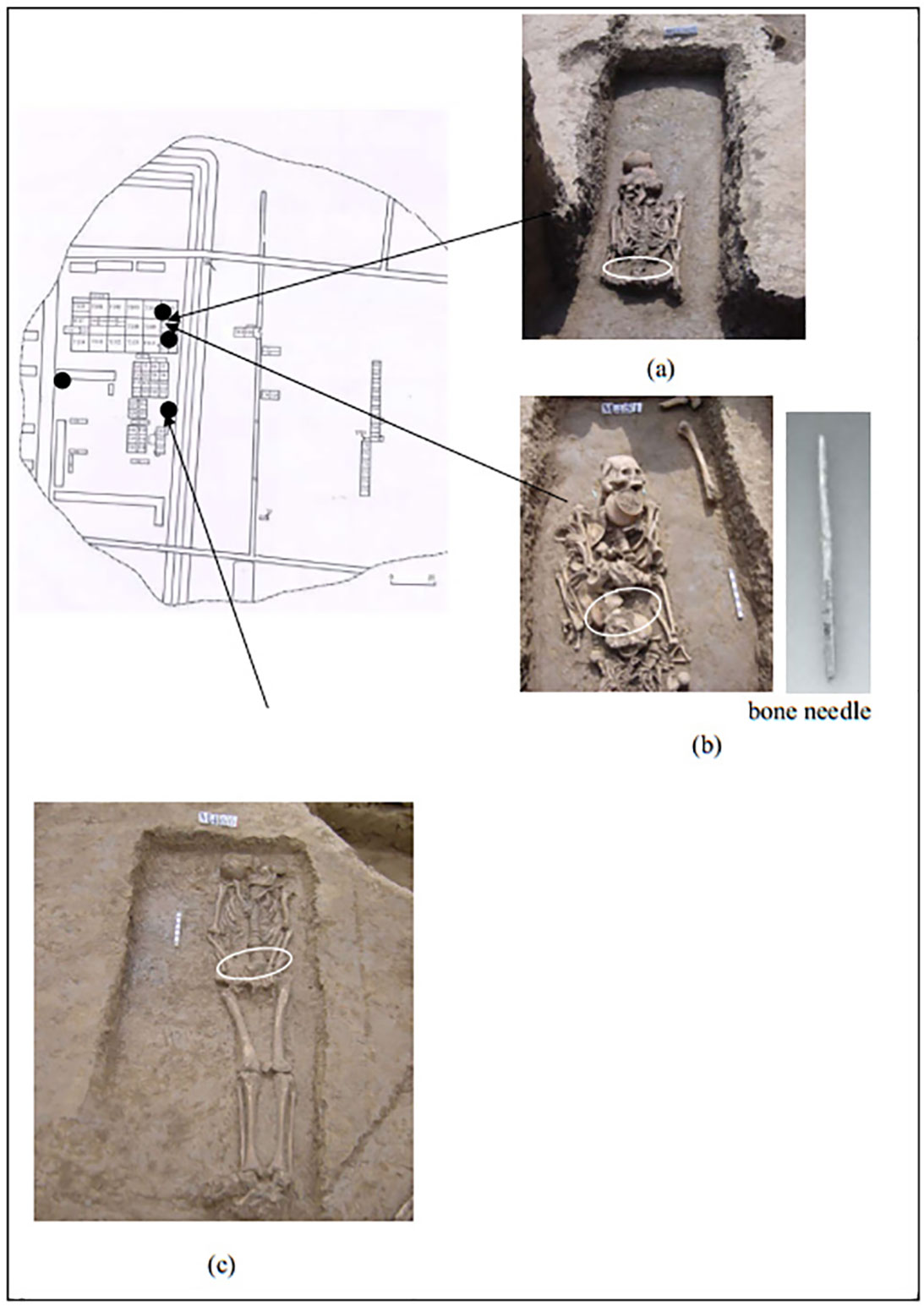 Tombs M436 (a), M451 (b), and M466 (c). The positions where the relic body soil samples were collected are indicated by the arrows and shown in the separate images. The four black dots indicate the locations where the control samples were collected.
News: China
Scientists Find Human Probably Made Silk 8500 Years Ago
By detecting silk fibre at the Jiahu Site
by Archaeology Newsroom - Wednesday, 11 January 2017

Researchers from the Department of the History of Science and Scientific Archeaology uncovered biomolecular evidence of silk from 8,500-year-old tombs at the Neolithic site of Jiahu, advancing the history of making silk for about 4000 years.

The detection of silk fibre in the ancient site is always a significant yet tough job. Weaving tools such as pottery, bone implements, and stone tools are routinely found at Neolithic sites. However, there is still not the direct evidence of the existence of silk. As a unique material, silk is unstable and can be damaged rapidly after long-term degradation. Credible peptide data obtained in the previous studies provided biomolecular evidence that silk fibroin could be preserved for more than 3,000 years and could be identified in soil with only the trace of textile.

Led by professor GONG Decai, Basic Research Center of Heritage Conservation Science of USTC has spent six years on distinguishing archaeological silk remains. They have built a series of method to identify and preserve the silk fibre in ancient Chinese sites. In the advancement of the research line, using Mass spectrometry (MS), invisible products of silk degradation from Jiahu Site which was identified by the Basic Research Center of Heritage Conversation Science. With rough weaving tools and bone needles excavated, it indicates that the detected silk may have been woven or sewn into clothing textiles. The results showed direct biomolecular evidence of silk fibroin in the soils obtained from 8,500-year-old tombs. The research article Biomolecular Evidence of Silk from 8,500 Years Ago on plos one has reported this research.

Jiahu Site is located in the central China which is famous for the discovery of the earliest playable musical instrument (bone flutes), the earliest mixed fermented beverage of rice, honey and fruit, the earliest domesticated rice in northern China, and possibly the earliest Chinese pictographic writing. It is one of the birthplaces of Chinese Culture. Central China exists a legend that Leizu is the one who firstly invented the silkworm breeding technique. However, the discovery of silk fibroin advanced the history of making silk for about 4000 years. Additionally, the finding provide evidence that China is the first to possess techniques of sericulture and use silk fibre, which has profound significance on the developing of the silk history.