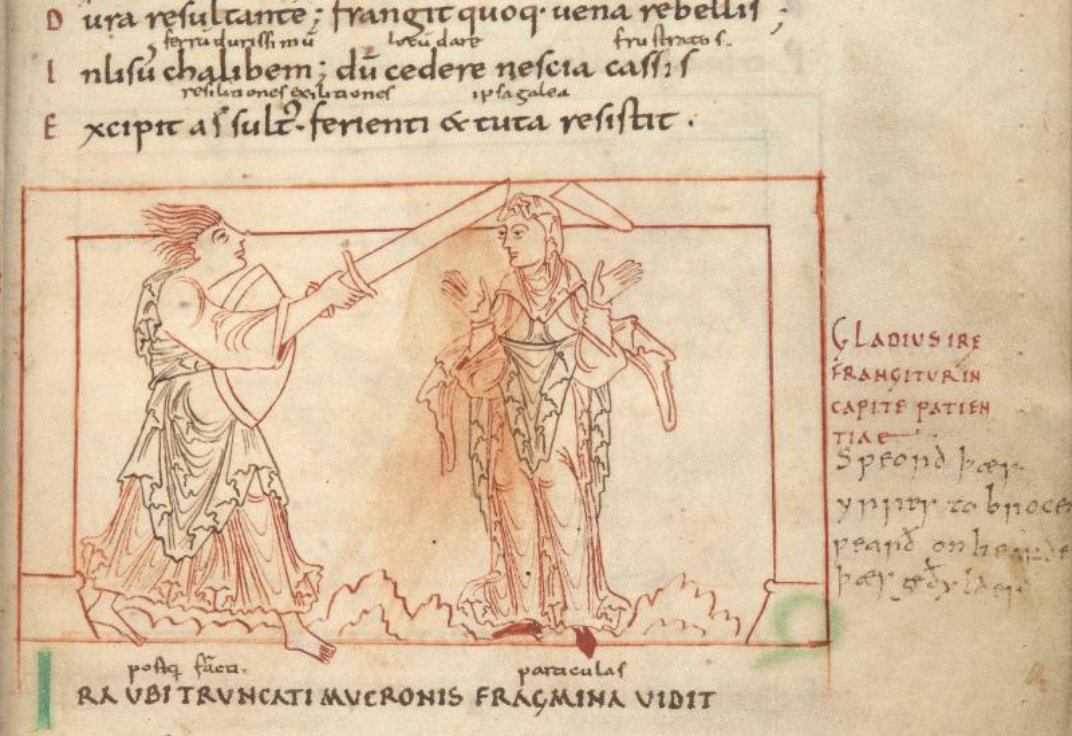 Psychomachia or War of the Soul is a 5th-century epic by the poet Prudentius. The poem depicts the battle of vices and virtues for possession of the human soul. Coleridge talked of it as “the first completely modern allegory in its form”. In the Middle Ages, the story became so popular that 300 copies of it have survived!  20 of these copies, also, are illuminated, in a form reminiscent of a modern graphic novel.

Prudentius and his work

Prudentius was born 348 in the Roman province of Tarraconensis in Hispania and died probably in the Iberian Peninsula sometime after 405.

At first, Prudentius was not a poet. Originally a governor and lawyer, he then retired from public life to become an ascetic. He devoted himself to Latin-language poetry with Christian themes. Psychomachia moves within this context. As Late Antiquity was giving way to the Middle Ages, Prudentius’ themes with their ascetic yet dynamic nature were more relevant than ever. Popular within monastic circles, and with monks willing to copy more and more manuscripts, versions of his Psychomachia flooded Europe.  Of special importance were the illustrated versions of Psychomachia, with Latin and Old English captions.

Two of the surviving copies are preserved in the British Library. They were produced in England, in the 10th and 11th centuries. They contain illuminations in bordered frames, where the seven virtues are depicted as female “champions of the Christian faith against seven female pagan idolaters, who ultimately claim victory on the battlefield in front of a thousand cheering martyrs”, as the British Library’s Alison Ray notes in the library’s medieval manuscripts blog. The illustrations are comparable to those of today’s graphic novels and comic books.

The pedagogical vocation of these illustrations suggests that these manuscripts were probably used in monastic schools. But why were monks drawn to the story? At the time war was very common. As monks could not fight in a literal sense, their role in society was to fight spiritual battles with invisible enemies. And the Psychomachia “conveyed a message to monastic communities that moral combat against spiritual enemies was just as heroic as facing physical opponents in war”, as Ray concludes.