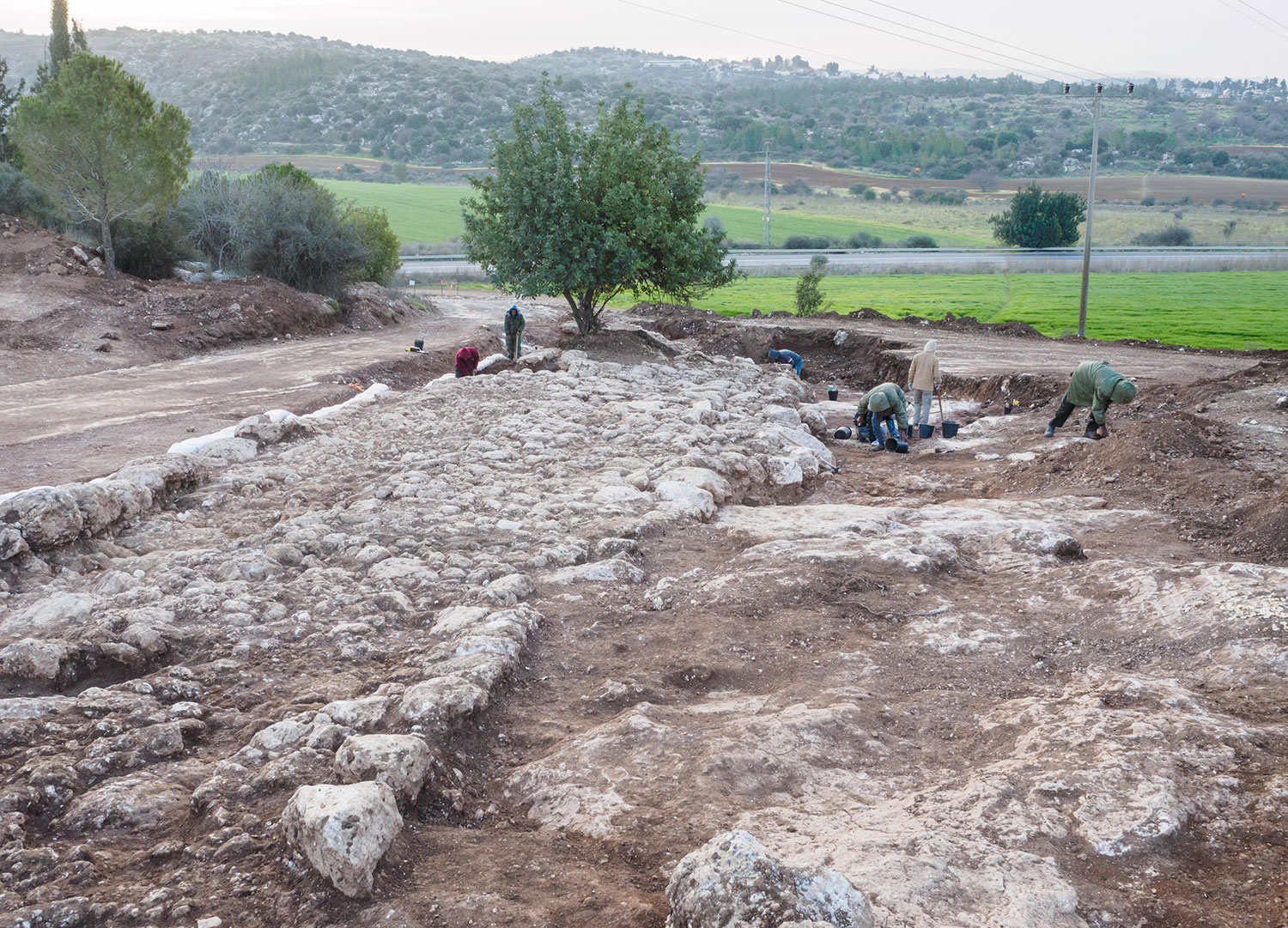 The impressive road dating to the Roman period was found in an extraordinary state of preservation.
News: Israel
2,000-year-old Roman road revealed in Bet Shemesh
It connected the large settlements of Eleutheropolis (Bet Guvrin) and Jerusalem
by Archaeology Newsroom - Wednesday, 8 March 2017

A wide and impressive 2,000 year old road dating to the Roman period, in an extraordinary state of preservation, was revealed in February during archaeological excavations of the Israel Antiquities Authority near Highway 375. The excavation was conducted prior to laying a water pipeline to Jerusalem, at the initiative of, the Bet Shemesh water corporation “Mei Shemesh”. Students from “Ulpanat Amit Noga” in Ramat Bet Shemesh volunteered to participate in the dig.

According to Irina Zilberbod, director of the excavation on behalf of the Israel Antiquities Authority, “The road that we discovered, which 2,000 years ago passed along a route similar to Highway 375 today, was up to 6 meters wide, continued for a distance of approximately 1.5 kilometers, and was apparently meant to link the Roman settlement that existed in the vicinity of Beit Natif with the main highway known as the “Emperor’s Road”. That road was in fact a main artery that connected the large settlements of Eleutheropolis (Bet Guvrin) and Jerusalem. The construction of the Emperor’s Road is thought to have taken place at the time of Emperor Hadrian’s visit to the country, circa 130 CE, or slightly thereafter, during the suppression of the Bar Kokhba revolt in 132-135 CE”. The presence of a milestone (a stone marking distances) bearing the name of the emperor Hadrian which was discovered in the past close to the road reinforces this hypothesis.

Coins were discovered between the pavement stones: a coin from Year 2 of the Great Revolt (67 CE), a coin from the Umayyad period, a coin of the prefect of Judea, Pontius Pilate, dating to 29 CE and a coin of Agrippa I from 41 CE that was minted in Jerusalem.

Up until 2,000 years ago most of the roads in the country were actually improvised trails. However during the Roman period, as a result of military and other campaigns, the national and international road network started to be developed in an unprecedented manner. The Roman government was well aware of the importance of the roads for the proper running of the empire. From the main roads, such as the “Emperor’s Road”, there were secondary routes that led to the settlements where all of the agricultural products were grown. The grain, oil and wine, which constituted the main dietary basis at the time, where transported along the secondary routes from the surroundings villages and then by way of the main roads to the large markets in Israel and even abroad.