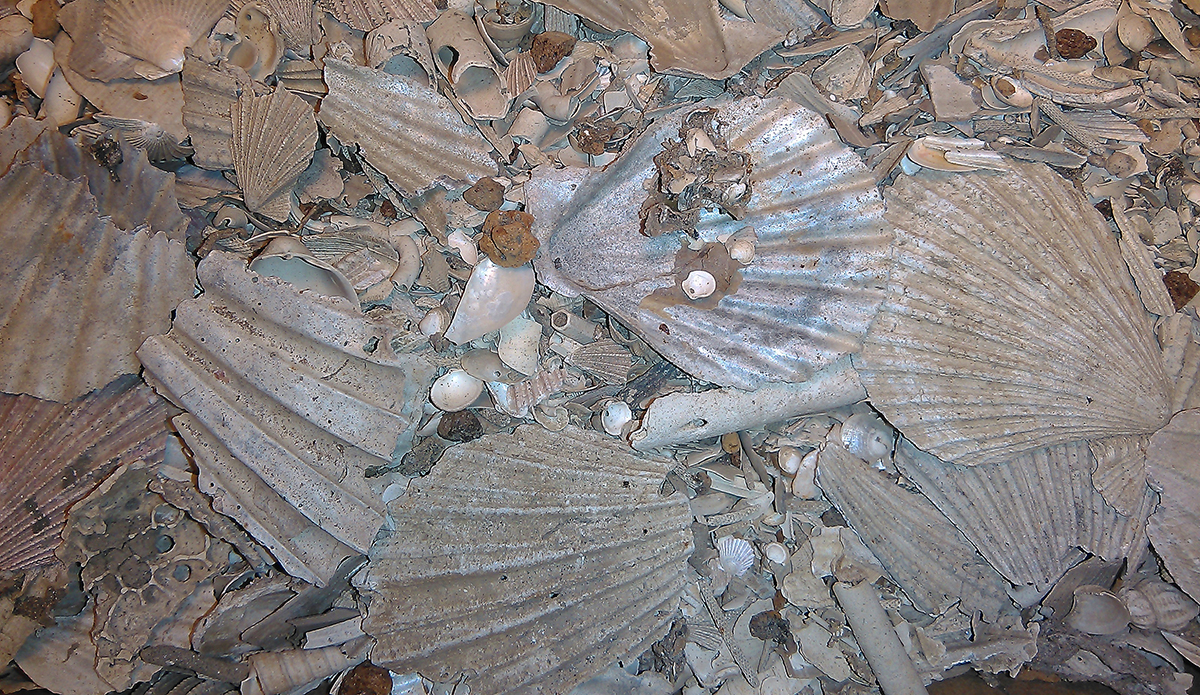 Paleontologists investigating the sea bed off the coast of southern California have discovered a lost ecosystem that for thousands of years had nurtured communities of scallops and shelled marine organisms called brachiopods.

These brachiopods and scallops had thrived along a section of coast stretching approximately 250 miles from San Diego to Santa Barbara for at least 4,000 years. But they had died off by the early 20th century, replaced by the mud-dwellling burrowing clams that inhabit this seabed today. Paleontologists Adam Tomašových of the Slovak Academy of Sciences and Susan Kidwell of the University of Chicago examine the lost ecosystem in a study published online June 7 in the Royal Society Proceedings B.

Evidence indicates that the brachiopod and scallop die-off occurred in less than a century. Because this community disappeared before biologists started sampling the seafloor, its existence was unknown and unsuspected. Only dead shells remain, permitting analysis by paleontologists.

“This loss unfolded during the 19th century, thus well before urbanization and climate warming,” said Kidwell, the William Rainey Harper Professor in Geophysical Sciences. “The disappearance of these abundant filter-feeding animals coincided with the rise of lifestock and cultivation in coastal lands, which increased silt deposition on the continental shelf, far beyond the lake and nearshore settings where we would expect this stress to have an impact.”

Continental shelves, the submerged shoulders of the continents, are a worldwide phenomenon. They form a distinct environment separated by a steep slope from the much deeper and vaster expanse of ocean floor beyond, and provide key habitats for biodiversity and fisheries.

The seabed off southern California is one of the most thoroughly studied in the world, but in applying geologic methods to modern biological samples of the sea floor, Kidwell and Tomašových encountered unsuspected results. Today that seabed consists of soft sediments, where creatures such as segmented worms, crustaceans, molluscs, crabs and urchins feed on organic matter.

This is a fundamentally different ecosystem than the one that preceded it not so long ago, said Tomašových, who heads the Department of Paleoecology and Organismal Evolution at the Slovak Academy.

In pioneering these methods since the 2000s, Kidwell and her associates have fostered the field of conservation paleobiology. Their work has shown that misfits between live populations and the shells they leave behind on modern sea floors do not signal poor preservation. The differences instead indicate a recent ecological shift–one usually driven by human activities such as pollution or sea-floor dredging.

Tomašových and Kidwell based their new study on the analysis of samples and data collected from multiple sources. They have conducted their own research on the sea floor off southern California, but they’ve also benefited from samples and monitoring data that other scientists have collected from the area since 1954.

Brachiopods and scallops, which prefer cold waters and a gravelly environment, range from the U.S.-Mexico border to the Gulf of Alaska. Tomašových and Kidwell eliminated climate warming as a likely culprit in their ecosystem collapse, given that large populations of brachiopods persist near Catalina Island, where water temperatures are similar to those of southern California’s mainland coastal waters.

The paleontologists instead pointed to the dramatic changes that southern California’s watersheds have undergone since 1769, after Spanish missionaries introduced cattle, horses and sheep to the area.

The researchers established the age of the brachiopods using a molecular dating technique called amino acid racemization. All of the 190 shells analyzed were more than 100 years old, and most were older than 200 years, indicating that the start of the population die-off coincided with the rise of livestock and cultivation on the nearby mainland.

Brachiopods and scallops have low tolerance for high levels of suspended sediment, leaving them vulnerable to the side effects of a regional economy that focused on cattle production from 1769 to the 1860s. During this time, much of modern-day Los Angeles and Orange counties were subject to unmanaged, open-range grazing. The economy shifted to agriculture in the late 19th century, but in the absence of soil conservation methods, the side effects on the coastal ocean would have continued unabated into the early 20th century.

The researchers concluded that siltation associated with this prolonged period of unmanaged land use probably drove the collapse of the brachiopod-scallop populations.

“Extirpation was complete by the start of 21st-century urbanization, warming, bottom fishing and scientific surveys,” Tomašových and Kidwell reported, emphasizing the value of combining many lines of historical evidence, especially the application of paleobiological methods to present-day ecosystems, to gain a fuller picture of recent biotic changes.

They further concluded that siltation derived from coastal land-use practices is an under-recognized ecological factor on continental shelves around the globe.