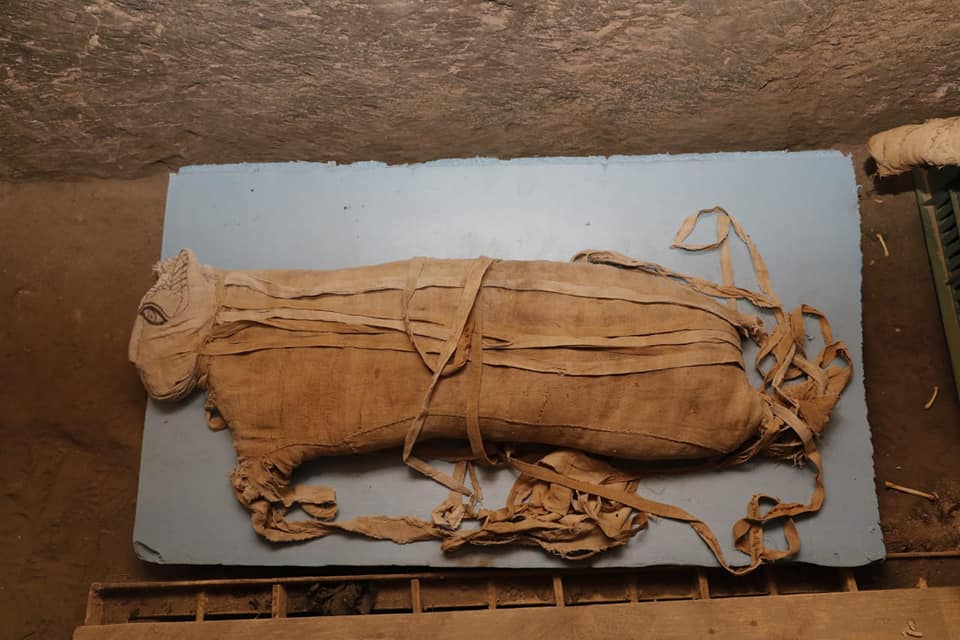 A rare animal mummies’ discovery has been announced by Egyptian authorities in a press conference.

The Egyptian Minister of Antiquities Dr. Khaled El-Enany announced  that a new discovery in Saqqara necropolis was carried out by an Egyptian archaeological mission led by Dr. Mostafa Waziri, Secretary General of the Supreme Council of Antiquities.

The discovery took place at the sacred animals necropolis, where excavations carried out by the mission last year uncovered the exceptionally well-preserved tomb of the 5th Dynasty royal priest Wahtye and dozens of animal mummies: of cats, cobras, crocodiles and even scarab beetles.

Dr. El-Enany explains that today’s discovery includes a large collection of 75 wooden and bronze statues of cats of different shapes and sizes; a group of mummified cats found inside 25 wooden boxes with lids decorated with hieroglyphic texts; wooden statues of animals and birds among them the apis bull, the mongoose, the ibis, the falcon and the ancient Egyptian god Anubis in the animal form.

The mission has also found, he continues, a very distinguished large scarab made of stone hidden inside a wooden box, two small size scarabs made of wood and sandstone; three statues of crocodiles inside them found remains of small crocodiles’ mummies. A collection of ancient Egyptian deities was also unearthed, said Dr. El-Enany, including 73 bronze statuettes depicting god Osiris; six wooden statues of god Ptah-Sokar; 11 wooden and faience statues of the lioness god Sekhmet as well as a beautifully carved statues of
goddess Neith wearing the crown of Lower Egypt.

A relief bearing the name of king Psamtik I was also discovered along with a collection of statues of Cobra; amulets; faience amulets of different shapes and sizes; wooden and clay mummies masks and a collection of papyri decorated with drawings showing goddess Tawert.

El-Enay describes the discovery as “a museum by itself as hundred objects have been unearthed here at the Bubastian necropolis in saqqara.” He said that these artifacts belong to the 26 th Dynasty of the seventh century BC, considered as the renaissance era. During the conference El-Enany announced that today is not the last discovery of the year but there will be another one next month before celebrating the Christmas. He said that studies revealed that five of these mummies may belong to lion cubs
as studies revealed. El-Enany pointed out that French Egyptologist,  Alain Zivie has previously uncovered near  this necropolis a skeleton of a lion.