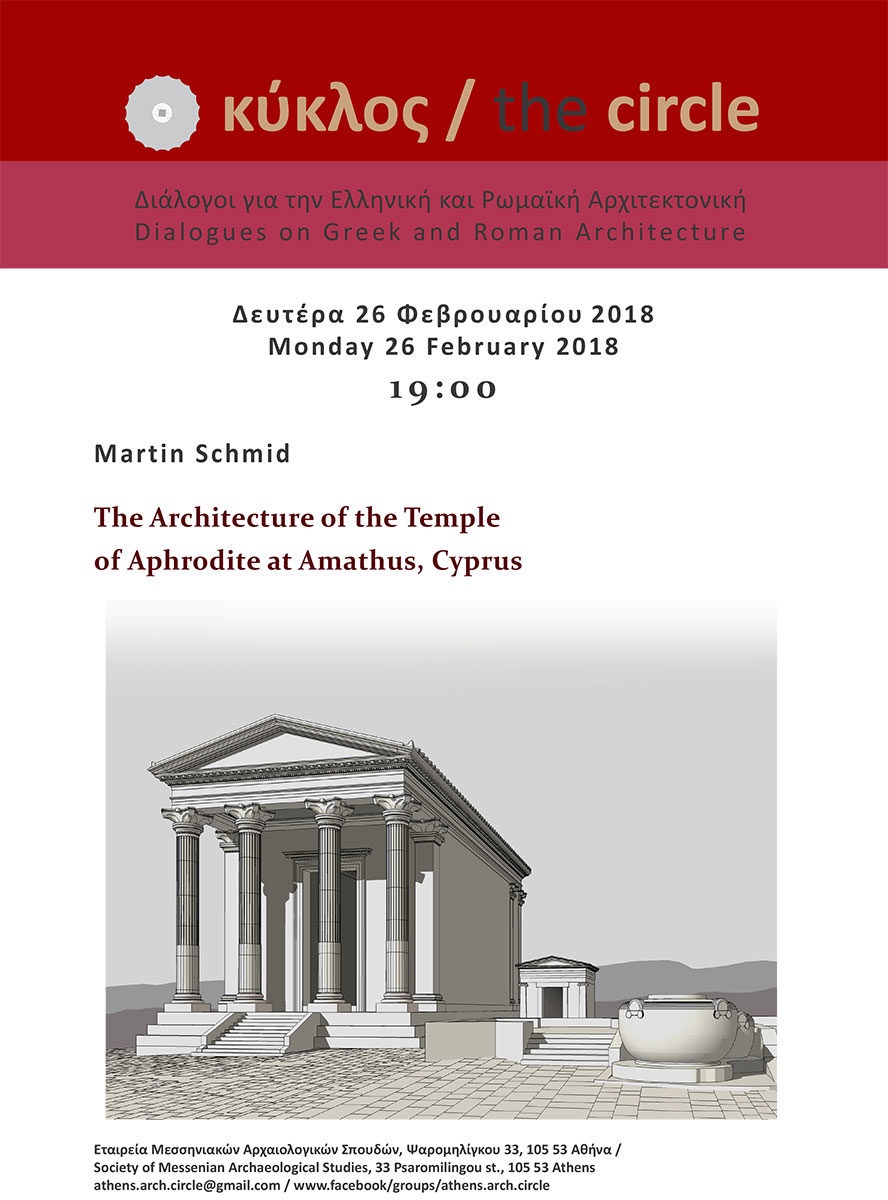 The Architecture of the Temple of Aphrodite at Amathus, Cyprus

Martin Schmid has will address the topic “The Architecture of the Temple of Aphrodite at Amathus, Cyprus”. The lecture is part of the “circle – Dialogues on Greek and Roman Αrchitecture” seminar series.

“The sanctuary of Aphrodite from its origin to the beginning of the imperial era” has
been published in 2006 by Antoine Hermary and Sabine Fourrier with the collaboration
of the architect.

This presentation focuses on the roman era and more particurly on the architecture of
the temple whose manuscript “the temple of the Cypriot Aphrodite” by Antoine Hermary
and myself, has just been submitted for publication.

The construction of the Roman Temple can be dated between 70 and 100 AD, thanks to
the discovery of a monetary foundation deposit. It was the dominant monument of the
Sanctuary of Aphrodite considered one of the most important in Cyprus, one of the
three which, according to Tacitus, had the privilege of granting the right of asylum.
The only remains of the Temple preserved in situ are the stepped crepis along the north
wall, and some steps of the access staircase. The crepis is composed of 3 steps but
only the first 2 are preserved. Surmounted by a plinth, they supported the wall that was
not surrounded by a colonnade like most Greek temples but by a wall decorated with
pilasters. Only 4 columns were detached on the front.

Fallen blocks along the west façade and numerous blocks reemployed in the later
basilica have allowed us to propose a probable restitution of the temple, particularly the
plan and the facades but also the inner decoration.

The magnificent Aphrodite’s temple at Amathus with its beautiful tetrastyle
facade presents not only both Greek and Nabatean features but also roman particularly
in the manner of construction. Special attention has been given to its geometric
features. Indeed the relationship between width and length of the temple and between
architectural elements are determined by geometric lines based on squares giving thus
harmonic proportions.