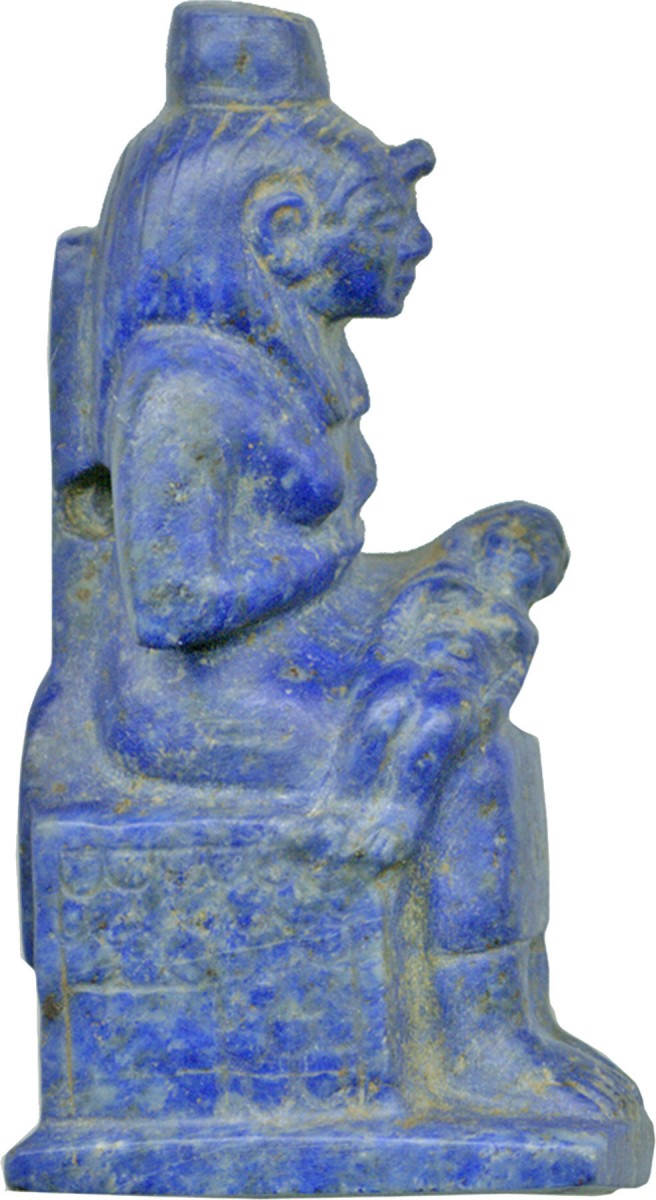 e-mail.: [email protected]
Ιστοσελίδα
A lapis lazuli amulet representing the goddess Isis seated on a throne decorated with a scale pattern. She holds her left breast and raises the head of infant Horus on her lap. The broad face and squat proportions may indicate an early date. The back is perforated at shoulder level. Walters Art Museum.
08 09 '16 11:17

Lapis lazuli was mined in the hills of Afghanistan and traded over 3000 miles into Egypt. This brilliant deep blue stone was highly desirable to the ancient Egyptians for the symbolism its color epitomized, and they called it “a costly precious stone from the God’s Land.” Found first as beads in Predynastic burials, lapis lazuli was regularly used throughout Egyptian history in jewelry and for small objects, such as amulets and the exceptional statuette. This lecture discusses the evolution of lapis lazuli’s use in ancient Egypt and how the stone’s importance can be better understood from considering the objects made from this rare deep blue stone.

Diana Craig-Patch, Lila Acheson Wallace Curator in Charge, is an Egyptologist specializing in archaeology, who received her PhD from the University of Pennsylvania. During her tenure at the Met, Patch has curated The Dawn of Egyptian Art (2012), an exhibition that demonstrated how Predynastic art contributed to the foundation of Pharaonic culture, and the exhibition Cleopatra’s Needle (2013–14), which celebrated the Central Park icon. Additionally, she co-curated the reinstallation of the Predynastic and Early Dynastic gallery (2003). Patch has taught courses at the Institute of Fine Arts, City University of New York, and Rutgers University, and also lectures extensively. For the past thirty-five years, Patch has carried out fieldwork in Egypt and currently is co-director of the Joint Expedition to Malqata—a project for mapping, excavating, and restoring the festival city of Amenhotep III in western Thebes.