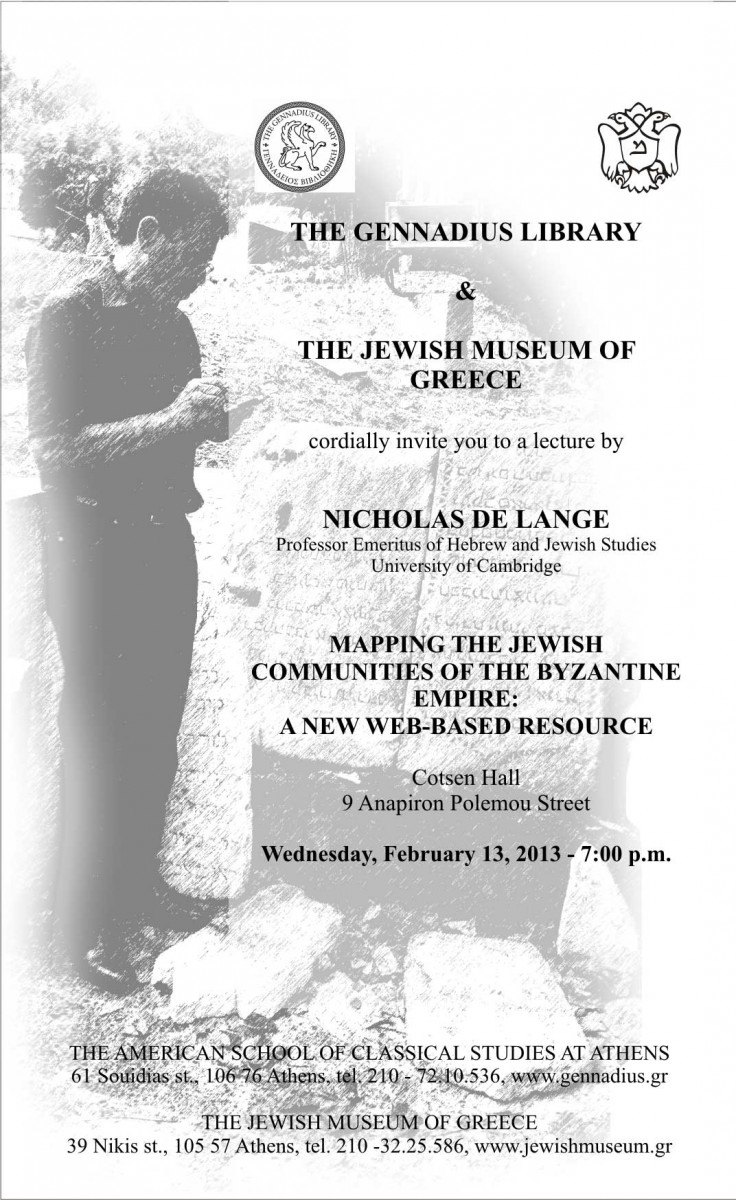 Mapping the Jewish Communities of the Byzantine Empire

“Mapping the Jewish Communities of the Byzantine Empire: A new web-based resource”

Lecture given by Nicholas de Lange (Professor Emeritus of Hebrew and Jewish Studies, University of Cambridge)

The scope of this presentation is broad. Professor Nicholas de Lange (Director of the project) will outline the title project first. The aim of this project is to map the Jewish presence in the Byzantine Empire using GIS (Geographical Information Systems). All information (published and unpublished) about the Jewish communities will be gathered and collated. The data will be incorporated in a GIS which will be made freely available to the general public on the world-wide web.

Researchers and members of the public will be able to create maps according to their own specifications. Chronologically, the project will begin in 650. This is soon after the Arab conquest of Egypt, Palestine and Syria when these regions, with their substantial Jewish populations, were permanently separated from the Byzantine Empire. The end-date is fixed by the arrival in the region of large numbers of Jewish immigrants from Spain in 1492.

Geographically, the core areas of Asia Minor, the southern Balkans and the adjacent islands including Crete and Cyprus will be included for the entirety of the period, Byzantine Italy however, will only be covered down to the Norman conquest. Some smaller territories that were only briefly under Byzantine rule may be excluded.

In addition, Professor Nicholas de Lange is working closely with the Jewish Museum of Greece on a relevant project conducted by the Museum, under the title “Corpus Inscriptionum Judaicarum Graeciae”. The JMG research project, under the supervision of Mrs. Z. Battinou (Archaeologist – Director of the JMG) aims to document, catalogue and photograph all the published and unpublished Jewish inscriptions in Greek and Hebrew from mainland and island Greece, dating from the 3rd c. B.CE. until the 16th c. C.E., not excluding specimens dating beyond those two termini. The forthcoming publications of the above corpora will offer the general public, as well as the scientific community, an invaluable research tool for the study of the history of the Greek Jewish Diaspora.