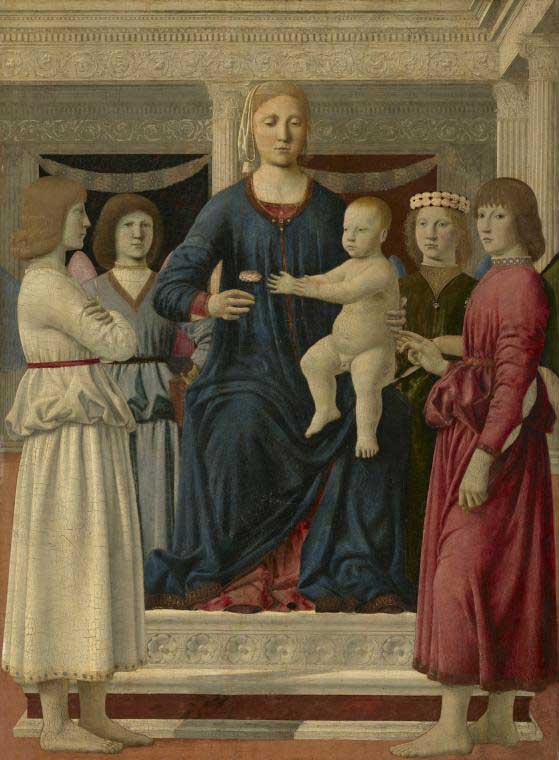 Revered in his own time as a “monarch” of painting, Piero della Francesca (1411/13–1492) is acknowledged today as a founding figure of the Italian Renaissance. The Frick Collection presents the first monographic exhibition in the United States dedicated to the artist. It brings together seven works by Piero della Francesca, including six panels from the Sant’Agostino altarpiece — the largest number from this masterwork ever reassembled. They will be joined by the Virgin and Child Enthroned with Attendant Angels, his only intact altarpiece in this country. Piero della Francesca in America is organized by guest curator and former Andrew W. Mellon Fellow Nathaniel Silver. The related catalogue will include essays by James Banker, Professor Emeritus, North Carolina State University; Machtelt Israëls, Guest Researcher, University of Amsterdam; Elena Squillantini, masters candidate, Università degli Studi di Firenze; and Giacomo Guazzini, doctoral candidate, Scuola Normale Superiore di Pisa.

Exclusive to the Frick, where it will be shown in the Oval Room, this important exhibition will also be accompanied by a rich and varied schedule of lectures, gallery talks, and seminars. The exhibition is made possible in part by the generous support of Mrs. Henry Clay Frick II, The Andrew W. Mellon Foundation, Hester Diamond, and The Robert H. Smith Family Foundation.

Piero della Francesca created the seven featured paintings for his hometown of Borgo Sansepolcro, which allows the exhibition to reconsider this pioneering artist in the context of his native city. Fundamental to his production was the Sant’Agostino altarpiece (1454–1469), the giant polyptych that towered over the high altar of the local Augustinian church. One of the greatest full-length figures from this work, Saint Augustine from the Museu Nacional de Arte Antiga in Lisbon, will make its debut in America with this presentation. It will be reunited for the first time with its companion, the Frick’s Saint John the Evangelist, as will all of the surviving small-scale panels from the Sant’Agostino altarpiece (Saint Apollonia from the National Gallery of Art, and the Frick’s Augustinian Friar, Augustinian Nun, and Crucifixion).

Completing the group will be one of the most important Renaissance works in America, Piero’s Virgin and Child Enthroned with Attendant Angels from the Sterling and Francine Clark Art Institute. This intact altarpiece encapsulates Piero’s singular ability to paint monumental figures of profound dignity and spiritual grandeur. As with his frescoes in Italy, which hardly ever travel, this large panel is rarely lent by its home institution. It has been presented in New York City only once since the Clark opened to the public nearly sixty years ago, making this a particularly exciting viewing opportunity. Removed from the artist’s native city nearly two hundred years ago, this masterpiece will be returned to the context of Piero’s oeuvre when it joins his six other paintings in the Frick’s Oval Room.