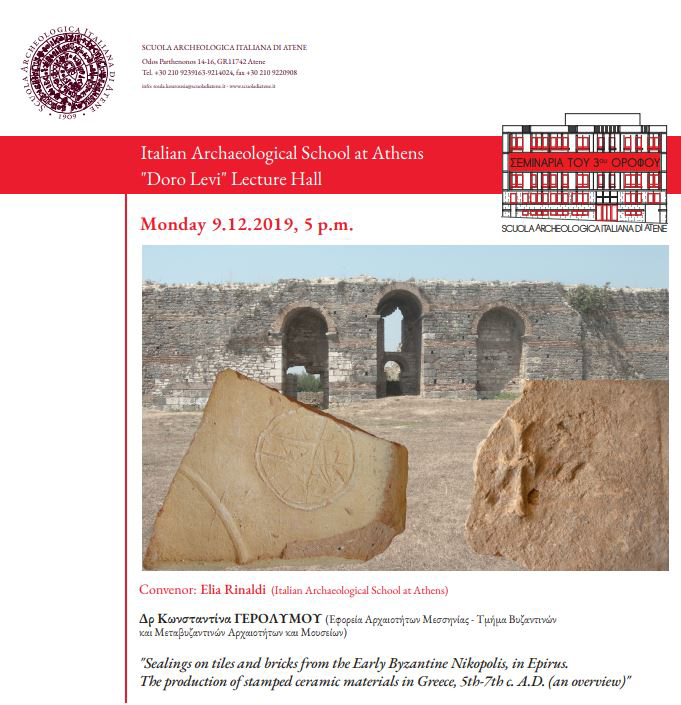 Sealings on tiles and bricks from the Early Byzantine Nikopolis, in Epirus

Dr. Konstantina Gerolimou (Ephorate of Antiquities of Messenia) will talk about:

“Sealings on tiles and bricks from the Early Byzantine Nikopolis, in Epirus. The production of stamped ceramic materials in Greece, 5th-7th c. A.D. (an overview)”

In the Roman city of Nikopolis (Epirus), excavations that have been conducted for more than a century (since 1913 to present with intervals) have revealed some of the most significant monuments of the later Period of city’s life, including the three Christian basilicas (A, B, D) and the Early Byzantine fortified circuit. From these monuments stamped building materials (bricks and tiles) in large quantities and of great variety have been recovered. Seventy seven different types of sealings have been recorded, organized in four main categories, according to the way that the sealing was made: with use of a stamp, with incised mold, with use of an incision tool, or with finger grooves. The typological classification of the material and the conclusions that can be drawn through its study are being presented. The display of similar material from other regions in Greece points out differences and similarities, and offers a comprehensive idea about the production of stamped bricks and tiles during the Early Byzantine Period.