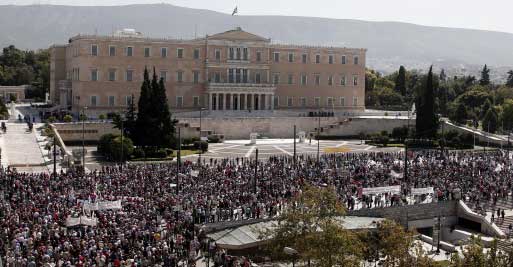 Seeing and Representing in the Greek Critical Conjuncture

Imagi(in)ng Crisis: Materialities of Seeing and Representing in the Greek Critical Conjuncture

The ‘crisis’ is currently emblematized as the fundamental term for organising, sensing and representing Greek social experience. Broadly defined as the destabilisation of any number of spheres (financial, social, environmental etc.), the ‘crisis’ entails the workings of imagination and representation as engaged by individuals and by official mechanisms of signification. The ‘crisis’ thus engenders poetics, ideologies, polemic, aesthetics and rhetoric. This workshop seeks to make sense of the Greek ‘crisis’, its experiences and representations, by bringing together anthropologists and visual practitioners. The workshop emphasises the sensorial level, and particularly visuality (taken to mean both the embodied act of seeing and the act of representing). The workshop approaches the ‘crisis’ as a field of experience, an object of representation, a sphere of affect and a realm of cultural production.

The focus on visuality takes up the challenge to destabilize the dominant social-science hierarchy of value that privileges discursive and linguistic modes. The workshop turns to the visual as a means of complicating information that stems from the study of discourse and rhetoric (Pinney 2004). At the same time, it explores questions of ideology in the construction, dissemination and perception of the ‘crisis’. Themes of interest include: visual media and protest; aesthetics and the senses; cultural production and agency; representation of suffering; subalternity; re-conceptualizing periphery and the margins; social imagination; poetics of dissent; ethnography in conditions of ‘crisis’; hegemony and the body; theorizing mainstream and other forms of media, activism and art-practice.

The keynote lecture will be delivered by Christopher Pinney (Professor of Anthropology and Visual Culture, University College London). Pinney’s work on Indian visual culture, and particularly his propositions concerning Other possibilities of visual ethnography and visual history, are fundamental to the workshop’s aims.