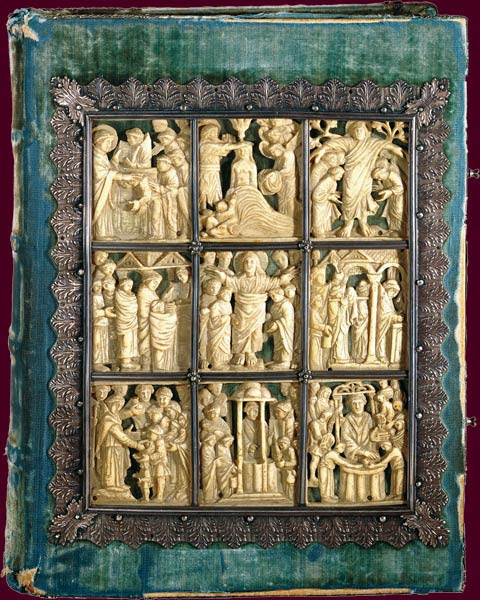 Ιστοσελίδα
Made during the Carolingian Renaissance, the Drogo Sacramentary (Paris, BnF latin 9428) is famous for its history.
02 10 '19 08:50

The Drogo Sacramentary: New Perspectives on its Ivory Plaques

Charlotte Denoël, Chief Curator, Department of Manuscripts, Bibliothèque nationale de France, will address the topic “The Drogo Sacramentary: New Perspectives on its Ivory Plaques”. The event is organized by the Medieval Art Forum. The Forum presents opportunities for discussion and exchange on topics of current interest to medieval art study.

Made during the Carolingian Renaissance, the Drogo Sacramentary (Paris, BnF latin 9428) is famous for its history – it was commissioned between 827/836-855 by Drogo, Charlemagne’s illegitimate son, bishop of Metz and great patron of the arts – and for its refined and sumptuous decoration that consists of several illuminations throughout the text and of eighteen ivory plates fixed on an 18th-century binding. The iconography of the illuminations and that of the sculpted ivory plates are very close, but the wrong order in which the ivory plates were reassembled during the modern era has made it difficult to understand the Christological and liturgical context of the scenes in the light of the Christian typology. Recent support from the King Baudouin US Foundation for conservation study, however, has now yielded major discoveries about the original order of the plaques, about their origin, and about the meaning of their iconography in relation to the manuscript. The lecture will focus on the different steps of the restoration and those discoveries.