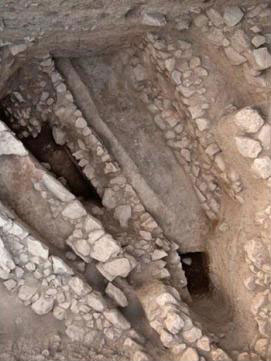 In the framework of the Aegean Lectures series, the Swedish Institute at Athens presents

“The Middle Bronze Age boat from Mitrou and the origins of Aegean boat building” by Aleydis Van De Moortel (University of Tennessee, USA)

In 2007, the remains of a small boat were discovered in the prehistoric settlement of Mitrou, located on the North Euboean Gulf in East Lokris, central Greece. This site was excavated in 2004–2008 by the 14th Ephorate of Prehistoric and Classical Antiquities and the University of Tennessee under the auspices of the American School of Classical Studies at Athens. The wood of the boat was not preserved, but its disintegration had left a black stain in the shape of the hull’s bottom. About half of this boat stain was excavated over a length of approximately 3 m and a maximum width of 1 m. It was a slender craft, lanceolate in shape, curving gently in cross-section and profile, and tapering toward a blunt extremity. Its length is estimated to have been 5.5–6.0 m. Its demise is dated to Middle Helladic II Early and it must have been built ca. 1900 B.C.E. Its modest size suggests that it was a locally built small transport or fishing vessel.

This is only the fourth small boat discovered at a prehistoric site in Greece and the first Bronze Age seagoing vessel in the Aegean with significant evidence for its 3-dimensional hull shape. With its extremely thin hull and gentle curves it closely resembles expanded logboats of ancient and medieval date excavated in northern Europe. It will be argued that the expanded logboat formed the basis of Aegean and later Greek boatbuilding, and that it determined the basic characteristics of Bronze Age and later plank-built ships