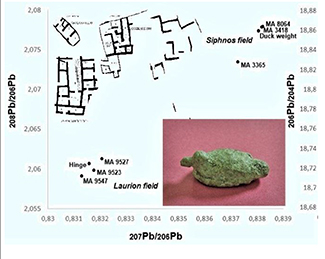 Recent data from the analytical examination of lead finds from the Mycenaean settlement at Lazarides, on the island of Aegina, indicate that at least from the 13th century BC, the silver and lead bearing mineral deposits of Siphnos were reworked.
02 05 '18 11:28

The origin of silver and lead in the Mycenaean era

Dr Charilaos E. Tselios (Directorate for the Administration of the National Archive of Monuments, Ministry of Culture and Sports) will be the speaker of the 5th meeting of the
Mycenaean Seminar on “The origin of silver and lead in the Mycenaean era”. The lecture will be held in greek.

The origin of silver and lead in the Aegean during the Late Bronze Age has been the subject of extensive analytical research since the early 1980’s. According to data obtained from Lead Isotope Analyses (L.I.A.) of lead artifacts and residues of the metallurgical
process, the area of Lavreotiki in Attica was the main supplier of silver and lead for the settlements of the Aegean during this period. This way a major archaeological paradox emerges, as despite the fact that the mineral deposits on the island of Siphnos had been
extensively exploited during the Early Bronze Age, they seem to have been abandoned from the Middle Bronze Age onwards.

Nevertheless, recent data from the analytical examination of lead finds from the Mycenaean settlement at Lazarides, on the island of Aegina, indicate that at least from the 13th century BC, the silver and lead bearing mineral deposits of Siphnos were reworked.
It seems, therefore, that the mechanisms of exploitation and transport of raw materials in the prehistoric Aegean may have been more complicated than the hitherto data imply and that they are closely associated with wider cultural changes, known from other fields of the archaeological research.