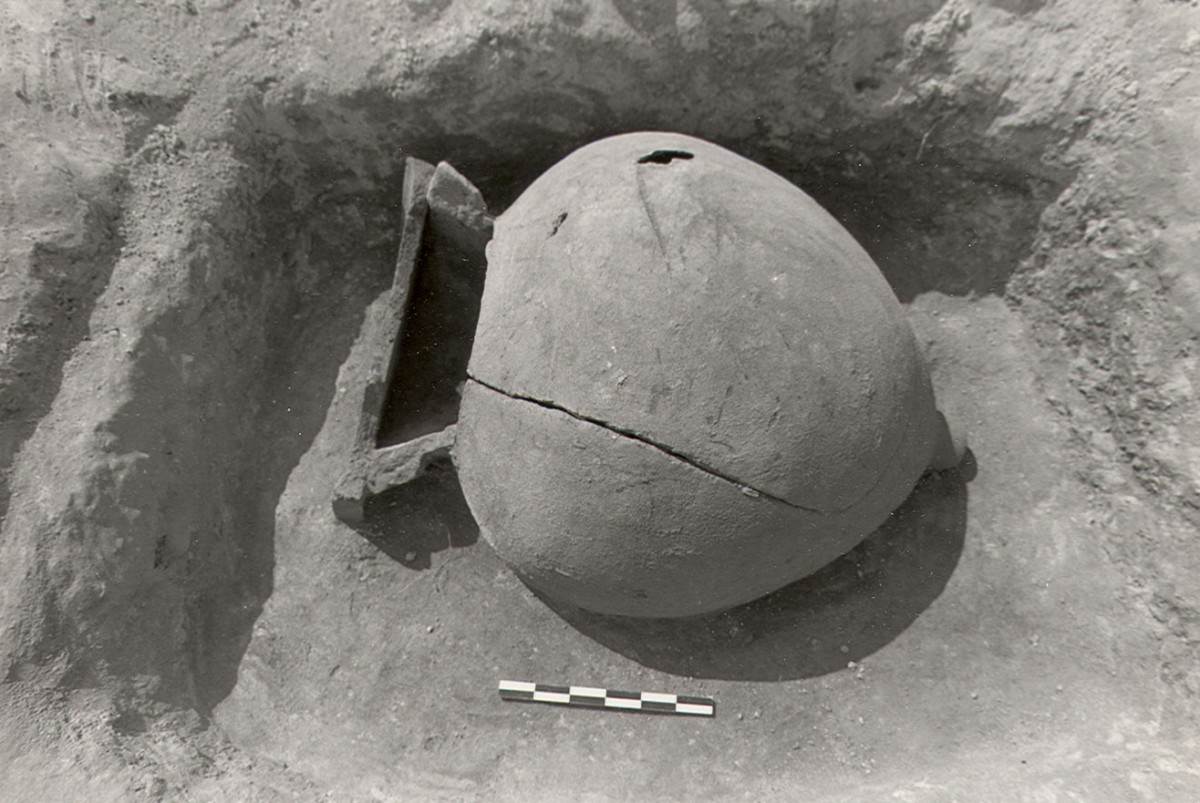 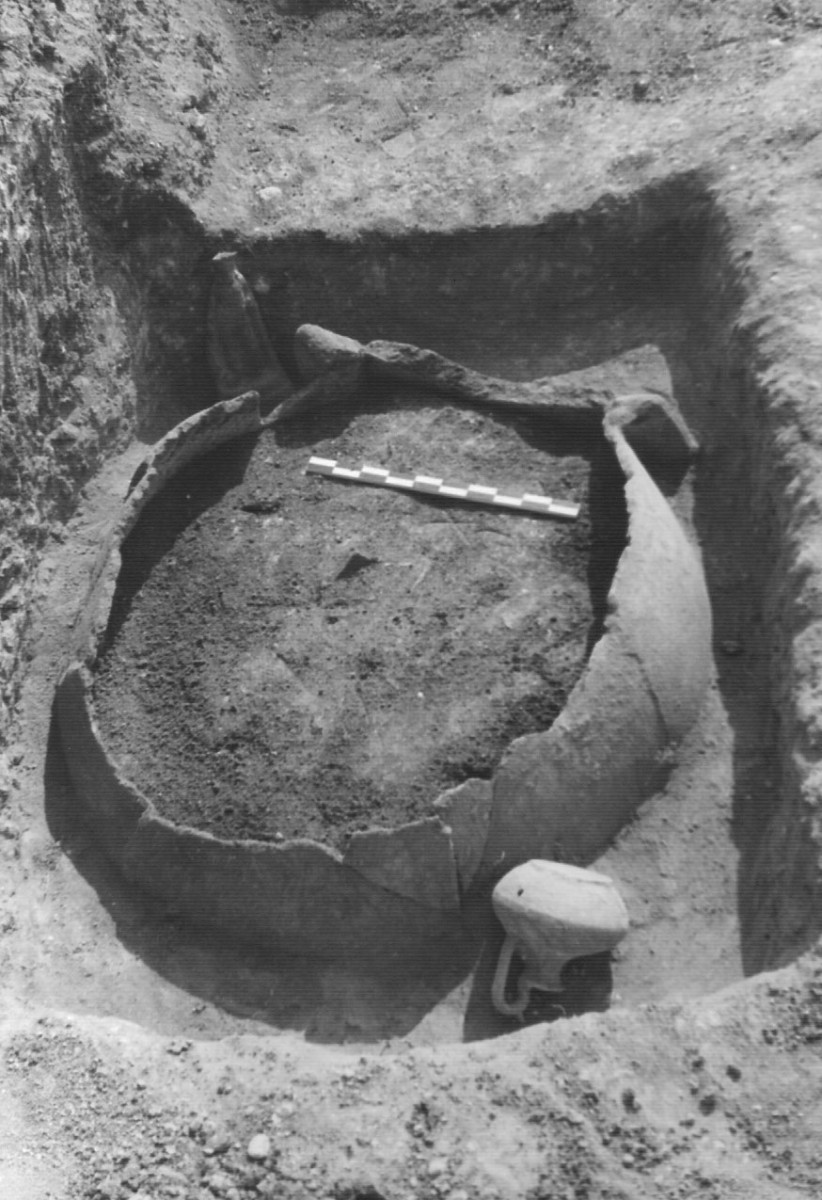 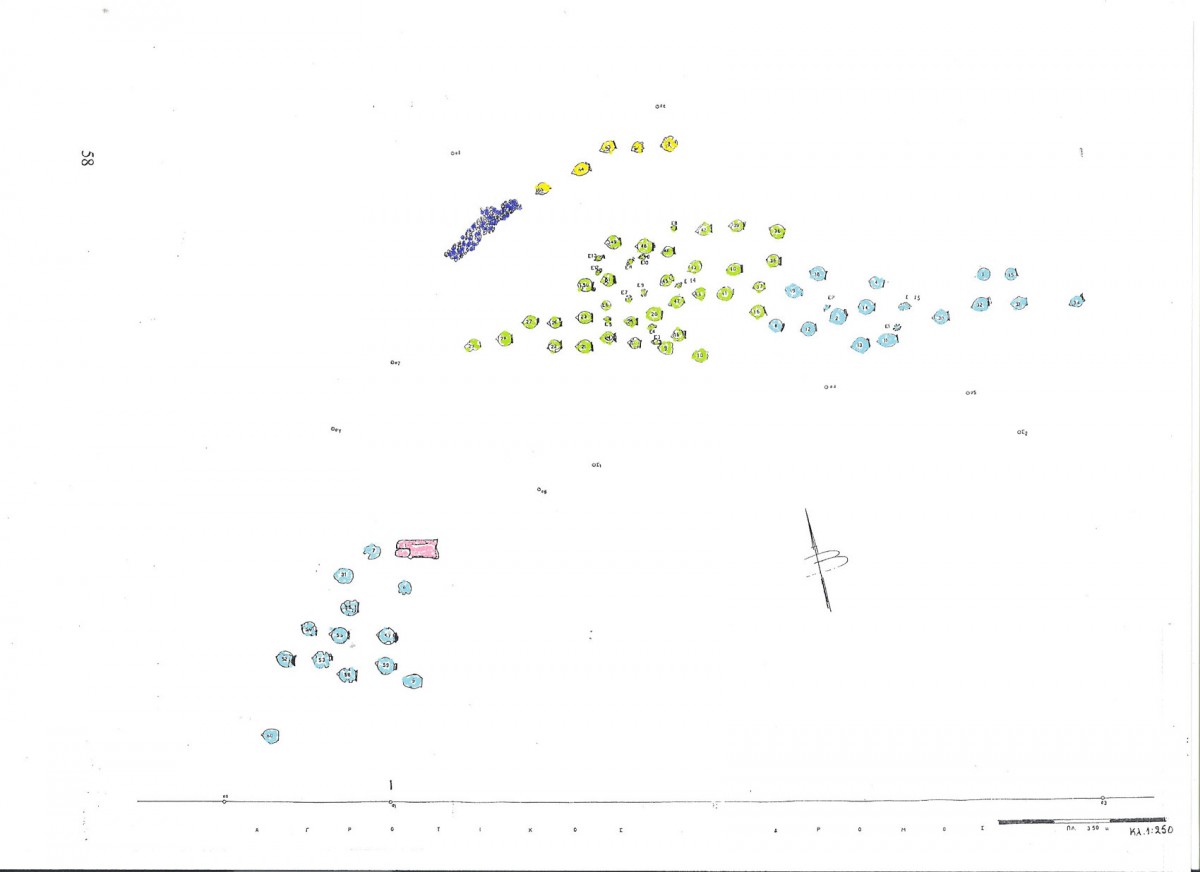 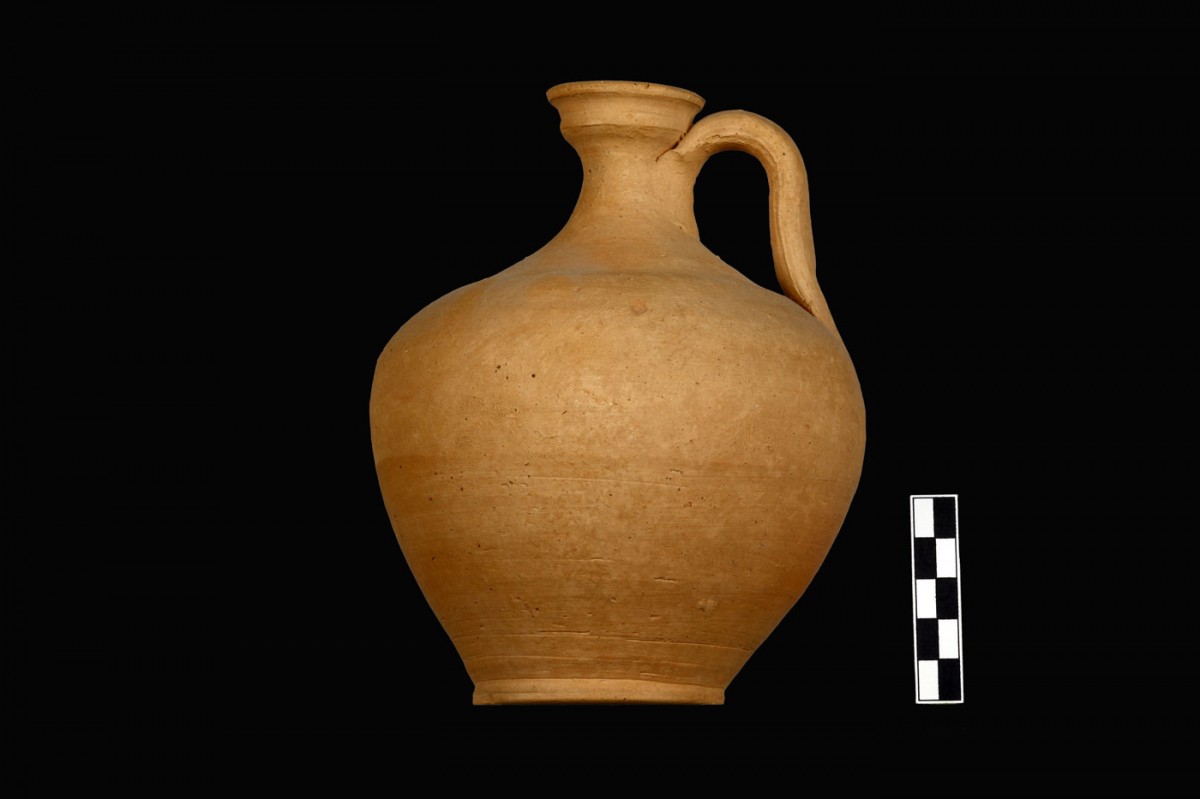 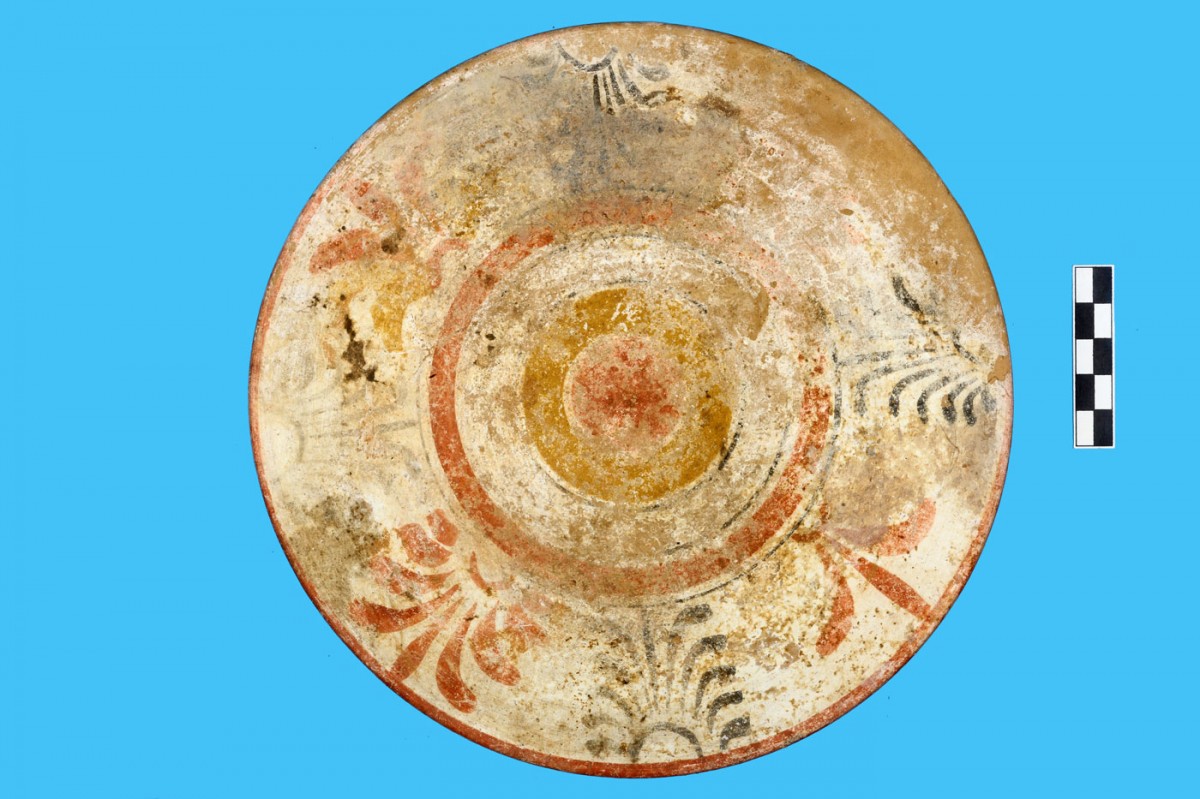 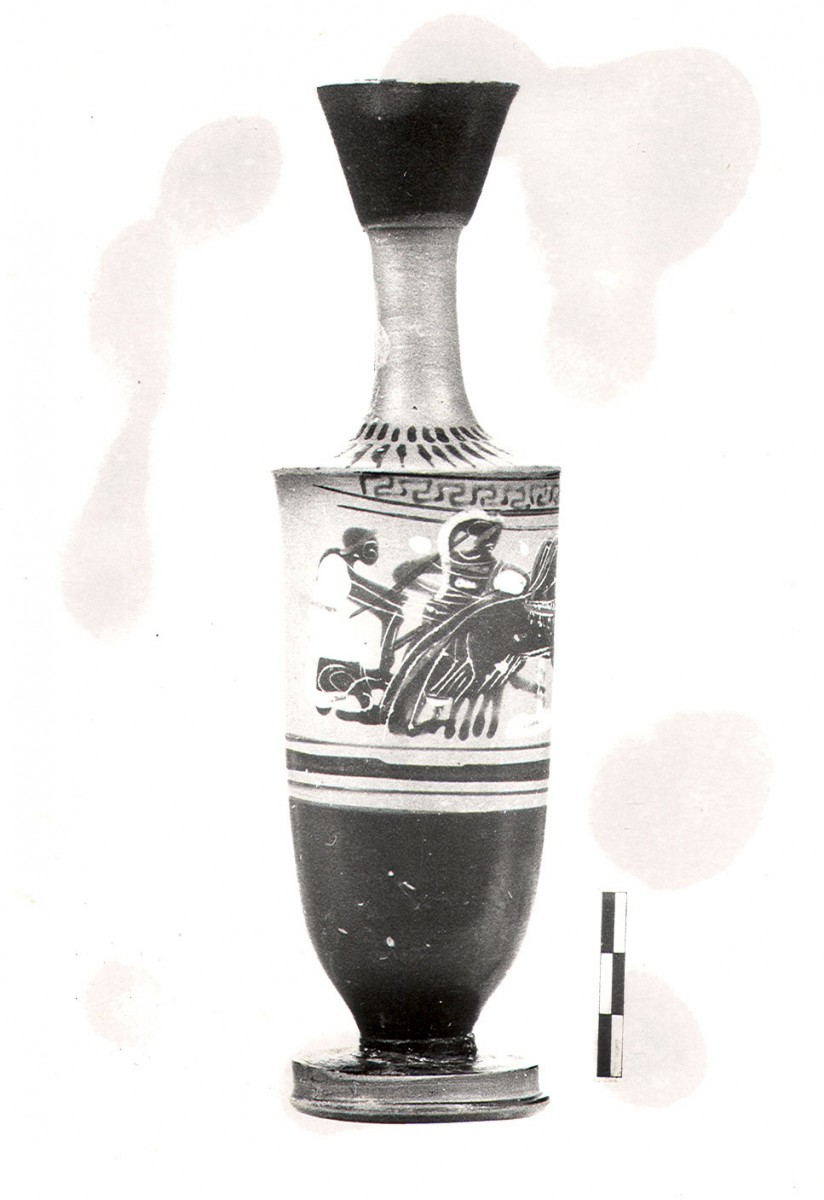 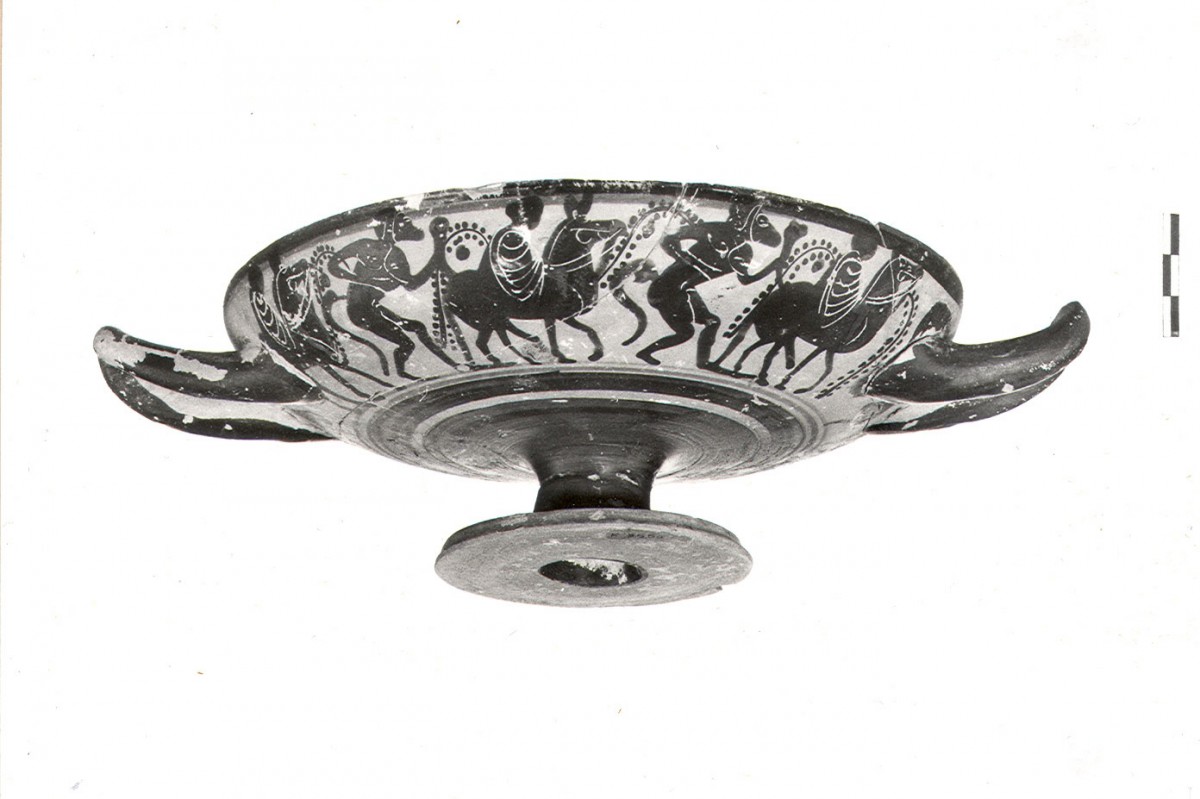 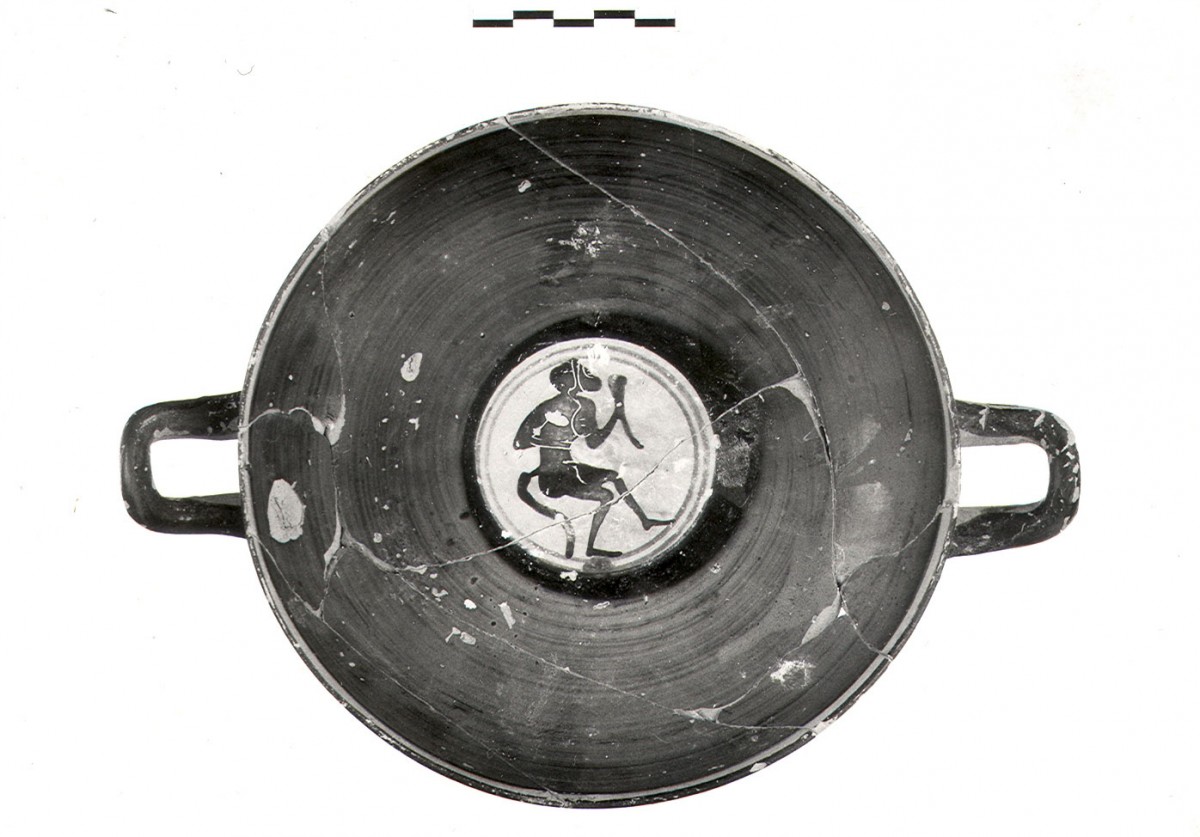 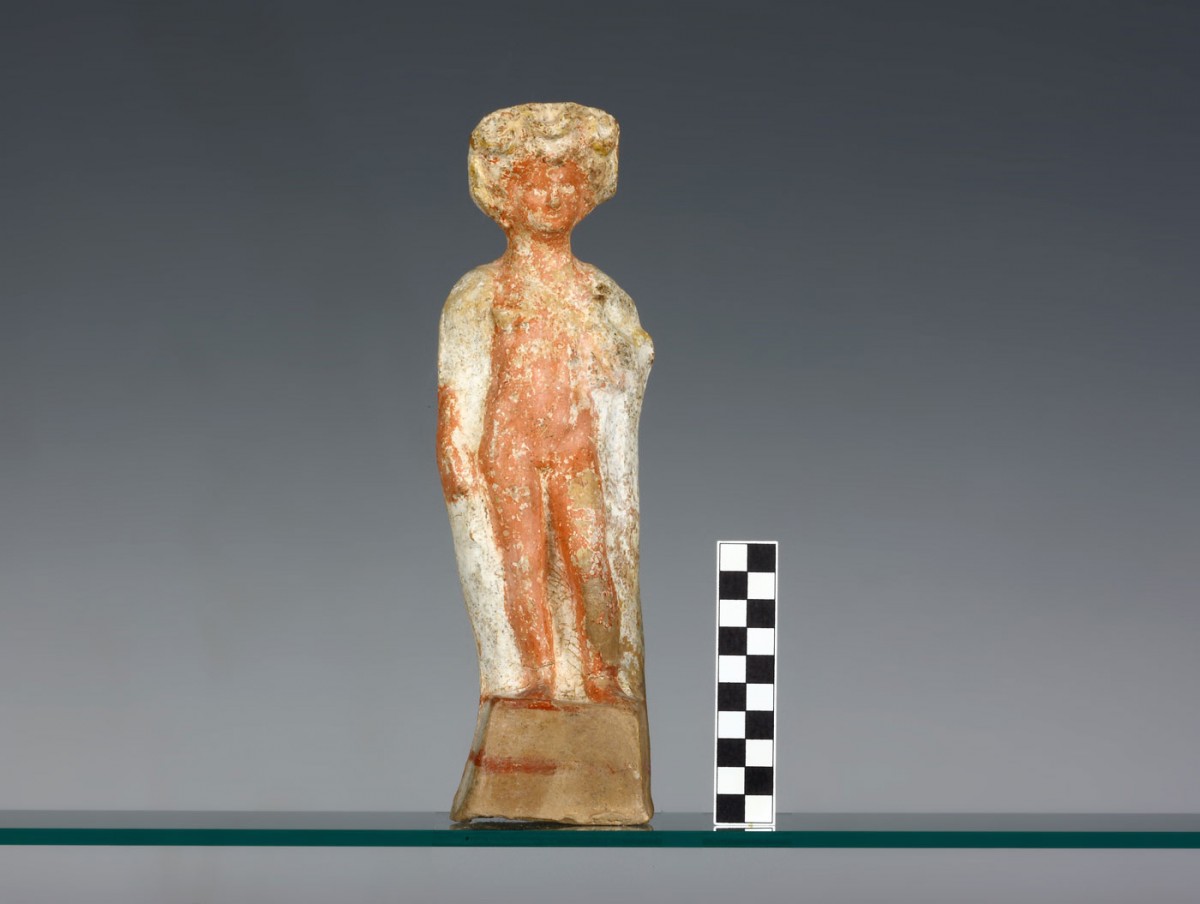 The cemetery at the site of Triantafyllia in Livanates (6th-2nd c. BC)

A contribution to the study of ancient Locris

This paper* focuses mainly on the burial practices of the cemetery at the site of Triantafylia Livanates in Opuntian Locris (Phthiotis Prefecture) by presenting the particularity of an exclusive interment in burial vessels; big jars for adults and smaller ones for children, with the exception of a cremation found during excavations.

In this study, comprehensive data is analysed so as to interpret the burial customs of this ancient society. The approach is composite, based on ancient sources, publications, cemetery data and primarily the ceramics of graves in the cemetery of Triantafyllia Livanates.

The study’s objective is to explore the character of this small society. Through research conclusions are reached regarding the political, artistic and economic relations of the inhabitants of the settlement to which the cemetery belongs along with the other cities. Views are expressed on the burial of adults in big jars as practiced both in this specific cemetery and others in the district as well as the rest of the Greek world, with comparisons being made. Resulting new data contributes to advancing research on the study of East Locris.

In antiquity the region known as Locris (note 1) was divided into East (note 2) and West (note 3). In turn East Locris (note 4) was also divided into east and west and took up approximately the south east part of the Phthiotis Prefecture. The geographic position of East Locris on the main route linking the north with the south part of the Greek peninsula was of strategic importance and definitive in setting its course over time. Important cities, such as Opus, Kynos, Kalliaros,Vissa et al. develop in the east part of East Locris also known as Opuntian (note 5). Opus (note 6) is the capital of Opuntian Locris and Kynos (note 7) its most important harbour. Excavation surveys in the region unearthed parts of settlements and cemeteries (note 8).

The cemetery at the site of Triantafylllia Livanates (on the plot belonging to G. Karaiskos) (note 9) is located within the boundaries of Opuntian Locris and situated about 2klms to the west of today’s Livanates, near ancient Kynos. It was discovered between 1981-1982 during a rescue excavation survey by the 14th Ephorate of Prehistoric and Classical Antiquities; supervised by Artemis Onasoglou antiquities curator at the time (note 10).

A total of 80 graves came to light in the Trantafyllia Livanates cemetery dating from the Late Archaic times up to and including the 2nd c BC. The cemetery’s particularity lies in the exclusive burial of adults in a total of 65 large jars and the children in 14 smaller vessels. There was only one cremation. All the cemetery’s graves (fig. 2) were distributed in the following three clusters: A to the north with Late Archaic graves, B in the centre of the cemetery with Classical and Hellenistic ones and C to the south with Hellenistic graves. The development of the cemetery in three clusters is realized lengthwise, in a horizontal continuous formation and on one level. The cemetery’s continual uninterrupted use becomes apparent from the graves’ dating, allowing us to distinguish the passage of time from grave to grave through a horizontal stratigraphy. The arrangement of graves from the Classical era was particularly dense compared to that of Hellenistic and Archaic times which was sparser. Small children were obviously buried in the same place as adults, as their jar burials were found in the same area. Funerary jars used for adult burials originate most probably from a local workshop. They are generally medium sized, with an oval body, a pointed base ending in compact cylindrical appendage. Their features are different depending on the era and it is apparent that their shape evolves over time. The typology of funerary jars usually differed from region to region, obviously because of local ceramic production. The vessels for jar burials include amphorae with pointed bottoms, unpainted jugs (πρόχοι) and small, plain, jar like vessels.

Research showed that the manner in which adults were buried in jars (fig. 1a, 1b), did not differ from corresponding ones in the rest of Greece. The jar was placed on its side and a piece cut from its belly to position the deceased inside it, then replaced when the burial was completed. The jars of Triantafyllia Livanates have a steady E-W orientation, with their mouths facing east. The only exception was a grave containing two dead and with its mouth facing west. It was found that preference for this orientation, both in the Triantafyllia cemetery and in the greater area of Opuntian Locris, remains constant over a long period of time.

The approximately 1,370 grave offerings were mainly vases (fig. 3a, b). Figurines, coins and metal objects were found in smaller numbers. The types of preferred grave offerings both in the Triantafyllia cemetery and the other ones in Opuntian Locris are the same; black-figure kylikes, small lekythoi, skyphoi, black-glazed kylikes-skyphoi, kylikes, kantharoi, karchesia, fish-plates, plates with a colourful decoration, unguentaria, unpainted jugs, lamps, fruit stands, coins and a few objects made of metal. The unpainted jug is constantly present in graves. This is usually placed outside the burial jar near its mouth and is seen as a ritual burial offering. The most luxurious vases (fig. 4a-c) used for that purpose were black-figure lekythoi , black- figure and black-glazed kylikes, black-figure skyphoi, a small red-figure lethythos resembling an aryballos, all imported from Attica. There was a mass production of imported objects and the Attic vases seem to have been widespread and the work of mediocre painters. Terracotta figurines (fig. 5) come in a variety and develop according to the trends of the era. Influences from neighbouring Boeotia are strong. The types are well known such as those of water carriers, standing and seated dressed female figures, nude youths either holding a cockerel, a wreath or a lyre. Zoomorphic figurines also form a large group. Those of the Classical period are made up of tortoises, pigs, doves, bulls and calves, horses with or without a rider and cockerels. The majority of grave offerings in Hellenistic graves are coins (a total of 122). Exchanges of the above products indicate good trading relations between the settlement’s inhabitants and Athenian and Boeotian craftsmen. Locals could purchase imported products by exchanging them with their own agricultural goods and livestock.

Historical events show that in Archaic times, the East Locrians are politically and economically powerful, with the founding on their territory of the first Amphictyonic League between the cities of Thessaly and Central Greece (note 11). Prior to 480 BC and the start of conflicts in their territories during the Persian wars, they experience a long period of peace and this is confirmed by the grave offerings in the Late Archaic and Early Classical graves of the cemetery.

Traces of a 4th c BC citadel (note 12) were uncovered on the hill of Paleokastra in the vicinity of the Triantafyllia cemetery. There are quite a few cemetery sites surrounding the citadel, found on low hills and fertile farmland. These range chronologically from the Mycenaean up to and including the Hellenistic era. The settlement of Paleokastra in Livanates has not yet been identified (note 13). Future excavations in the region will give answers to timely questions and provide a clearer picture of the area’s history. Nevertheless, the settlement, to which the Triantafyllia Livanates cemetery belongs, has been inhabited continuously from Late Achaic to Hellenistic times. The Late Archaic graves make up the smallest percentage of 6.25% of the cemetery’s total number, followed by the Hellenistic with a larger rate of 42.5% and the Classical graves making up a maximum of 51.25%. Consequently, the settlement has shown the greatest development during the Classical era. 81.25% of the dead were adults or adolescents and 17.5% young children and infants. Infant mortality in the Classical era is approximately 85.7%, decreasing considerably in Hellenistic times to 14.3%. In the case of Late Archaic graves the rate is zero.

An osteological examination of preserved bones from findings to date (in 12.5% of cemetery graves), led to conclusions on the eating habits of a small sample of the settlement’s inhabitants. Research showed that an increased consumption of plant carbohydrates and fruit, combined with bad dental hygiene, caused teeth to be worn away (note 14). Certain individuals also showed a thinning of the roof of the eye socket associated with low meat consumption. While the size and fragmentary quality of the sample do not allow us to draw any more specific conclusions, it seems that the diet of the adult population was based, for the most part, on vegetables (including cereals and pulses) with a very small percentage of meat being consumed.

The settlement’s inhabitants’ steady preference for burying adults in a certain manner i.e. in large jars, is a practice also encountered in the area’s vicinity. It has been found there that from Late Archaic to Hellenistic times, the dead were usually buried; the most predominant way being jar burials for adults and adolescents and interment in smaller vessels for children and infants. The phenomenon is also known in the greater area of East Locris. In the rest of Greece, examination of the practice of burying adults in jars (note 15) showed that this was frequently preserved as a custom in mainly three areas of Greece; Aitoloakarnania, the Peloponnese, mainly on its western side, East Locris, but also on the coast of Asia Minor. Choosing this specific practice over a particular period in the cemetery of Triantafyllia Livanates may have served ideological, social or other needs of the actual society (note 16).

In conclusion, excavation data shows that funerary offerings in the graves of the Triantafyllia Livanates cemetery are no different typologically than those of other kinds of burial at that time in the region. The inhabitants of the settlement must have obviously worked as farmers or fishermen (due to the sea’s proximity).Certain objects were imported from Attica and Boeotia and many came from local workshops. These people could have been craftsmen, potters, farmers, breeders of livestock and fishermen. The ceramics prove good relations of the settlement with Athens and Boeotia. The large number of coins testifies to contacts and transactions between the local society and the world at large. The existence of a harbour nearby would perhaps have facilitated trading contacts. Consequently, this society was neither closed nor isolated. It was independent and self sufficient, capable of fulfilling its needs. Preserving the same burial practice over a long period of time, from generation to generation, could possibly have also concerned specific social groups living in the region such as those with close family ties, a certain race or faction et al. The custom was perhaps connected with specific beliefs held by humans on death. Future excavation surveys will certainly uncover new data contributing to the study of the history of East Locris.

*The study was realized as part of a doctoral thesis and examines the practice of burying adults in large jars in the cemetery of Triantafyllia Livanates in Opuntian Locris (Phthiotis Prefecture).