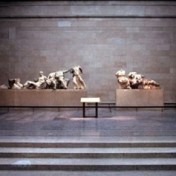 New Parthenon marbles have been discovered!

While Greece and the UK are fighting for the so-called Elgin Marbles, new parts of the Parthenon sculpted decoration come to light. Fragments of, at least, five "metopai" – rectangular iconistic parts characteristic of a "Doric Style" frieze – from the Parthenon were found incorporated to the Acropolis' west fortification wall. The parts were thought to have been destroyed after a bombing of the site by the Venetian militant Francesco Morozini in 1687.