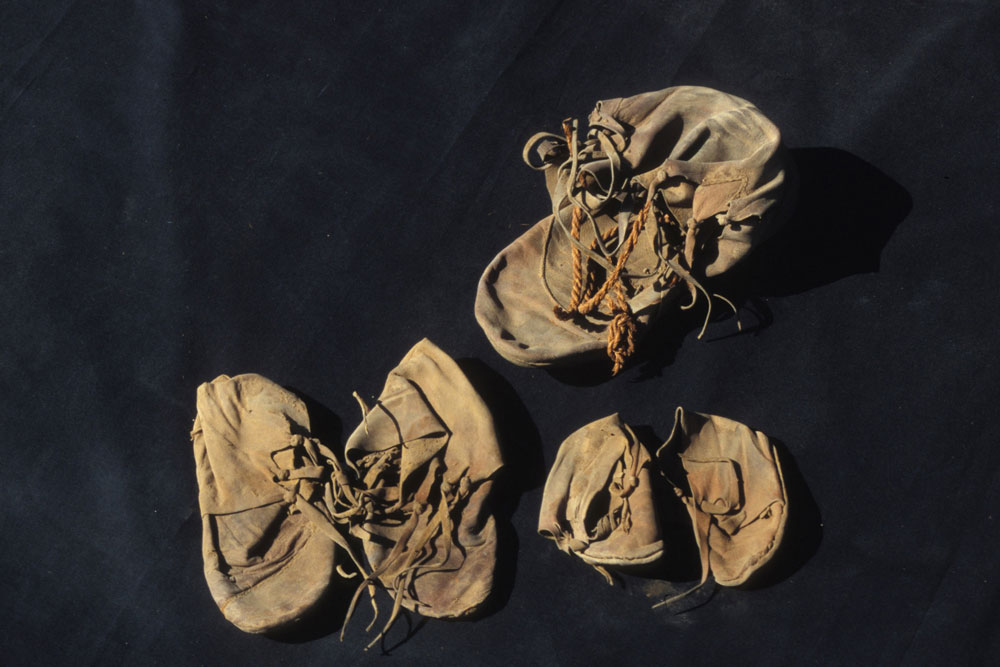 The shoe-filled jar from Luxor

The photographs of a shoe-filled jar, found in an Egyptian temple in Luxor, in 2004 by an Italian archaeological expedition team led by Angelo Sesana, have been examined by André Veldmeijer, an expert in ancient Egyptian footwear, who published his findings in the latest edition of the Journal of the American Research Center in Egypt.

The jar contained seven shoes, three pairs and a single one. Two pairs were originally worn by children and were only about 7 inches (18 centimeters) long. The child shoes were tied together with palm fiber string within the single shoe, which was larger and meant for an adult, and put in the jar. Another pair of shoes, more than 9 inches (24 cm) long that had been worn by a limping adult, was also inserted in the jar.

The jar containing the shoes, along with two other jars, had been “deliberately placed in a small space between two mudbrick walls,” writes Sesana in a report published in the journal Memnonia.

Veldmeijer’s analysis suggests the shoes may have been foreign-made and were “relatively expensive.” Sandals were the more common footwear in Egypt, and the style and quality of these seven shoes was such that “everybody would look at you,” Veldmeijer explained.

The date of the shoes is based on the jar they were found in and the other two jars, as well as the stratigraphy of the area. It may be possible in the future to carbon date the shoes to confirm their age.

Why they were left in the temple in antiquity remains unanswered. “There’s no reason to store them without having the intention of getting them back at some point,” Veldmeijer said in an interview with LiveScience, adding that there could have been some kind of unrest that forced the owners of the shoes to deposit them and flee hastily. The temple itself predates the shoes by more than 1,000 years and was originally built for pharaoh Amenhotep II.

Veldmeijer made many discoveries about how the shoes were being worn, about the health of the people who wore them etc. For instance, the left shoe of adult pair had more patches and evidence of repair than the shoe on the right. “The shoe was exposed to unequal pressure,” he said, showing that the person who wore it “walked with a limp, otherwise the wear would have been far more equal.”

Veldmeijer hopes to have the opportunity to examine the shoes firsthand.