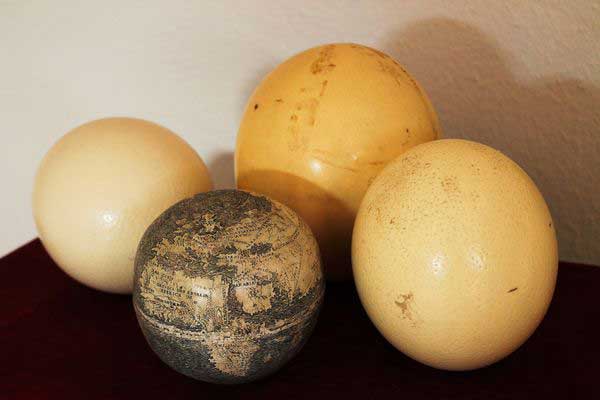 The mysterious globe was discovered by a Belgian map collector

A recently discovered globe from the early 1500s, carved onto ostrich eggs, may be the oldest globe of the New World ever identified, according to experts. Latin inscriptions dot its surface, and two small islands sit in the place of what we now know as North America. But the globe’s origins remain a mystery.

Τhe artifact was purchased anonymously at a London map fair in 2012, after passing through the hands of a string of European map dealers. Eventually, the rare find came into the possession of Belgian map collector Stefaan Missinne, who began to investigate it, as e wrote in The Portolan, the journal of the Washington Map Society.

Until now, the earliest surviving globe was believed to be the Hunt-Lenox globe, made from copper and dating to 1504-1506. The two globes share nearly identical labels and detailed contours, and Missinne argues this is no coincidence.

“There are differences between the two globes; however, when carefully considered these differences do not weigh against the suggestion that the Lenox Globe is a cast of the ostrich-egg globe,” Missinne said in the journal article.

Although mapmakers have turned to various creative materials throughouth history, such as sticks or sealskin, vellum (calfskin parchment), or blocks of wood, globes created from ostrich eggshells are not common, and for this reason—regardless of its age—the artifact is rare.

To judge the age of the eggshell, Missinne consulted a radiologist, who helped him photograph and compare the density of the old shells—the globe is made of two connected shell halves—with the density of newer ostrich eggshells.

Based on that comparison, the radiologist determined that the older, much smaller shell had lost 50 percent of its calcium bone density—a sure sign of aging. Because of the similarities between the two globes, Missinne hypothesizes that the newly discovered artifact came before the Lenox globe.

However, some cartographers are skeptical of the map’s age because of its ambiguous history. The eggshell may date as far back as the 16th century, but that does not mean the map etched onto it is equally as old.

“It very well may be an early globe, which is interesting in itself, but provenance issues come to mind,” according to John Hessler, curator of the Geography and Map Division at the Library of Congress in Washington, D.C.

“The first thing I would have wanted to know is where it came from—where it was purchased, who had it before, what collections it was in,” Hessler said.

“The race for the first is something I tend to shy away from,” he added, “but the bigger picture of the globe is more interesting to me than the single piece.”