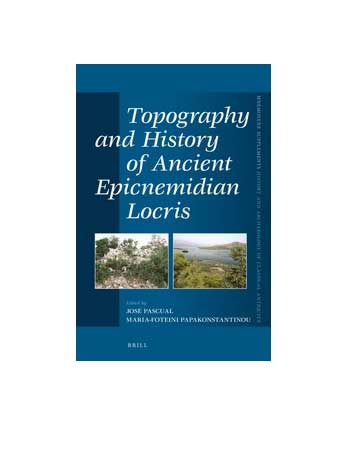 This book presents the results of a major project carried out by a team from the Universidad Autónoma de Madrid and the 14th Ephorate of Prehistoric and Classical Antiquities at Lamia. The book gives a full picture of a extensive area of Greece known as Epicnemidian Locris, on which very little has been studied and published in the past. Its relevance in historical times was due to its natural environment and mainly on the pass at Thermopylae, which marked the physical boundary between central/northern Greece and the south, being the scene of repeated conflicts. The book offers a a complete picture of what Epicnemidian Locris was like in the past: its geography, topography, frontiers and the ancient settlements of the region.

José Pascual, Ph.D. (1993), Universidad Autónoma de Madrid, is Professor of Ancient History at that university. He has published monographs and many articles on Ancient Greek History, including Greece in the Fourth century B.C. From Spartan imperialism to the death of Philip of Macedon (in Spanish, 1997).

Maria-Foteini Papakonstantinou is Director of the 14th Ephorate of Prehistoric and Classical Antiquities and Deputy of the 24th Ephorate of Byzantine Antiquities of the Greek Ministry of Culture. She has published many articles on the Archaeology of Central Greece and has excavated, for example, the Asclepieion of Daphnus.