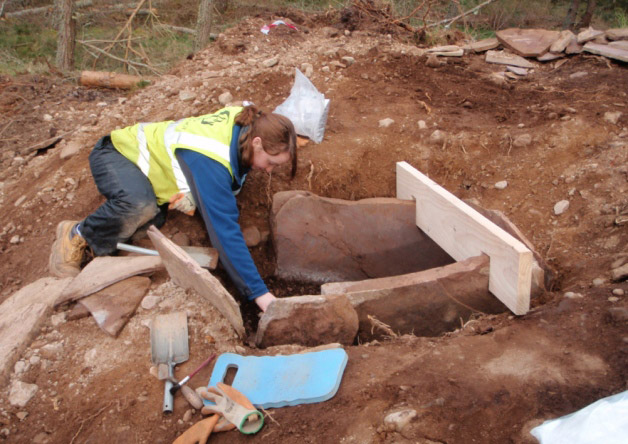 Death On The Highlands

A burial cist of Bronze Age date containing the remains of a woman alongside pottery was found during construction work followed by rescue excavation in Cullaird Wood in West Torbreck, south-west of Inverness, in the Scottish Highlands.

According to osteoarchaeological research performed by expert Maureen Kilpatrick, combined with radiocarbon dating, the woman died in her fourties (between 40 and 44 years of age) between 1982 and 1889 BC, and she was physically active and strong, but she had really bad teeth. Kilpatrick’s observations are stated as follows:

“A single individual was present and was deemed to be of probable female sex based on pelvic and skull morphology.

“Preservation of the skeleton was fair with 50 per cent available for study. Much of the right side, which had been in direct contact with the subsoil, had not survived and those bones that had were affected by surface erosion.

“Unfortunately, height could not be established due to the incomplete state of the surviving long bones.

“Both the right and left femurs appeared quite robust with fairly prominent muscle attachments, suggesting that the individual probably led a physically active lifestyle.

The cist grave -actually a stone burial chest- was discovered in an area significant for its prehistoric remains. Kilpatrick explains that cists were used in the area for a period of 300 years, probably signifying the extent of continuity in local traditions.

While cists are the norm in North East Scotland, pottery in them is not. In that light, the find accompanying the newly found woman, a beaker, which was part of the burial rites, must be interpreted as indicating West Torbreck’s importance, its links with the River Ness, and possibly the North Sea region beyond. And while the area immediately around West Torbreck remains relatively rural, 200 m. to the east one can find the Torbreck stone circle, a megalithic monument consisting of nine upright stones and two outliers, which are thought to be the remains of an outer circle.