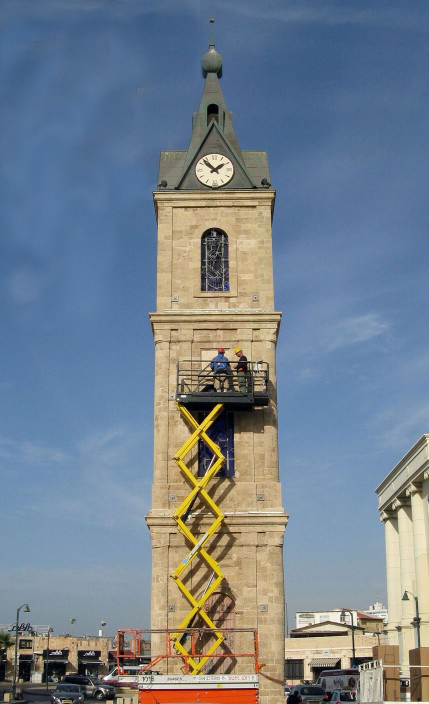 Are you visiting in Jaffa? Raise your head and look up: from now on you can once again see the original seal of the sultan Abdul Hamid II, builder of the clock tower, displayed on the city’s famous landmark. Over the past year, the clock tower has undergone conservation measures and engineering reinforcement implemented by the Ezra u-Biratzon Company of the Tel Aviv-Jaffa municipality. During the course of the work it became apparent that the original marble seal (tughra) bearing the symbol of Sultan Hamid Abdul II (ruler of the Ottoman Empire in the late nineteenth and early twentieth centuries) was in a poor state of preservation. Not only had the marble long since lost its original color and it was no longer possible to identify the relief on it, but the seal’s plaque, located at a height of 12 m above the sidewalk, was in danger of falling. The marble was cracked and partly detached from the wall, and its surface was crumbling. This seal, located on the southern side of the tower, was the last original seal of four to be preserved on the structure. In 2001, the three glass replicas adorned with the sultan’s seal were installed there in place of the marble plaques that did not survive. Conservators at the Israel Antiquities Authority who examined the last original marble seal that remained on the tower determined that its critical condition required that it be saved; hence, it was detached from the wall using chisels and transferred to the conservation laboratory in Jerusalem. There, conservator Mark Avrahami performed the conservation and restoration work: a new support for the seal was created, the seal, which had faded completely, was accentuated utilizing pigments, and upon completion of the work, the marble plaque was returned to its original location two weeks ago. According to Faina Milstein, the Israel Antiquities Authority conservation architect for Old Jaffa, “The clock tower, which is in the center of what is today Clock Square, was built next to Jaffa’s monumental sites: the Qishla – the Ottoman period police station, and the Saraya – the Turkish government house. More than one hundred clock towers were constructed throughout the Ottoman Empire in honor of the twenty-fifth anniversary of the reign of Sultan Abdul Hamid II, of which six clock towers are known in Israel: at Jaffa, Akko, Jerusalem, Haifa, Safed and Nablus. A seventh tower, for which there is still some doubt if it is actually a clock tower, is located in Nazareth”. According to Dr. Yoav Arbel, an archaeologist with the Israel Antiquities Authority, “The tughra first appeared as the seal of the second Ottoman sultan, Orhan (1326-1362 CE) and has since represented the sultans of the Ottoman Empire, as well as the kingdom itself. The tughra is a monogram that incorporates the sultan’s name, his titles, his father’s name and blessings, along with symbolic characteristics of the Ottoman Empire. It served as the sultan’s official seal for use on documents, public buildings, coins etc.”. The tughra also appears at the top of the Qishla, near the clock tower, and above the impressive sabil (a public fountain) called Suleiman’s sabil, in front of the city gate, which was also treated in recent years by the conservators of the Israel Antiquities Authority.