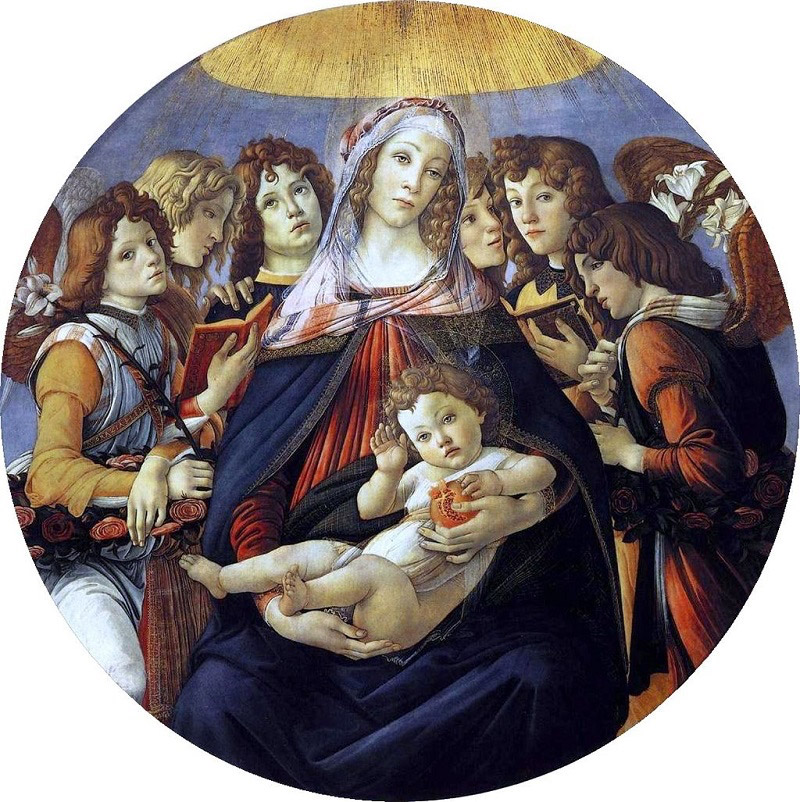 Depicted in the pomegranate held by Jesus

Only a few months ago in March, Dr Davide Lazzeri, an expert on Medicine in Art, revealed a particular anatomical detail “concealed” in the folds of the cloak held by “Flora” to hide the naked body of the Goddess of Love in the famous painting “The Birth of Venus” by Sandro Botticelli, in the Uffizi Gallery, Florence.

According to Dr Lazzeri, the folds’ shape and colour actually recreate a feature of human anatomy, namely a lung, with its nerves, blood vessels and cavities divided by the bronchi. This allegory had also most probably been used by the same Florentine artist in another of his famous paintings “Primavera”. In 2009, two American scientists Nenjamin Blehe and Roy Doliner had already located the outline of the two lungs carefully disguised in the vegetation and spreading branches behind the image of Venus.

These previous studies were precisely what inspired the Italian surgeon to conduct further research for possible hidden anatomical details in Botticelli’s work and in fact he recently published an article on a new discovery concerning the other masterpiece by the Renaissance painter: the “Madonna of the Pomegranate” (1487), also displayed in the Uffizi Gallery.

According to the study of Lazzeri and his team, published in the Interactive Cardio Vasckular and Thoracic Surgery, in the pomegranate the baby Jesus holds in his hand, one can distinctly recognize a perfect anatomical representation of the human heart. As the surgeon told the Italian news agency ANSA, “the arrangement of the seeds and veining on the peeled pomegranate corresponds exactly to that of the valves, the heart’s four chambers and the main pulmonary aorta. Even the crown of the pomegranate is divided into two parts that imitate the superior vena cava and the aortic arch with its three branches “.

These striking similarities with the anatomy of the heart and the position of the fruit that Jesus holds on the left side of his chest, level with his heart support the possibility of Lazzeri’s hypothesis being well founded.

The question however arises: why should the artist want to hide these anatomical details in his works? The study confirms that at that time, visual artists often attended anatomy lessons, seeking a more realistic and plastic representation of the human body. Botticelli not only attended anatomy classes in Bologna, but he also definitely knew the extensive collection of Leonardo Da Vinci’s anatomical drawings.

It is of course obvious that both the depiction of the lungs and of the heart represents allegories. The pomegranate is a strongly symbolic image, which may contain various interpretations, especially in works with a Christian content and message. According to the study of Dr. Lazzeri’s team, it may symbolize Christ’s Passion and Resurrection; the scarlet seeds, which correspond to the blood spilled by the Son of God to redeem humankind.

Botticelli was clearly not the only artist to include disguised anatomical details in his works. Starting from Michelangelo, artists boldly concealed enigmas in their self-portraits, as well as other various symbolisms, which were interpreted much later; sometimes not till after many centuries. Much diagnostic research, with advanced technological means, has revealed numerous complicated hidden images in artists’ masterpieces, while also revealing earlier representations under the painting’s visible surface.

Interpretation is now in the hands of art historians who are expected to bring both fresh knowledge and approaches to the dialogue on the creation and true message of a work of art: a dialogue that is expected to be most enlightening and exciting.