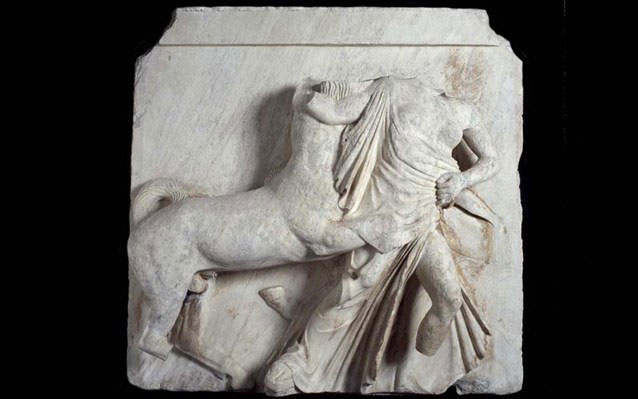 Offering a collection of bronze artefacts in exchange

Greece has asked France to lend a marble frieze, part of the Louvre collection, removed from the temple of Parthenon in Athens. The aim is to display the item in Greece as part of the bicentennial celebrations of the country’s independence in 2021. The request was made by Greek prime minister Kyriakos Mitsotakis during talks with French president Emmanuel Macron.

Greece is offering in exchange a collection of bronze artefacts to be displayed in France. The exchange of artefacts will be temporary and no official statement has been issued yet, as the matter will have to be arranged by the culture ministries in both countries.

The frieze dates to the 5th century BC and was sent to the Comte de Choiseul-Gouffier by the diplomat, Louis François Sébastien Fauvel in 1789. The metope in question depicts a scene of the Centauromachy, a battle between centaurs and the Lapiths, a people from the region of Thessalia. The scene represents the abduction of a Lapith woman by a centaur.

The request for a loan has reignited the debate over the return of the Parthenon marbles at the British Museum in London, brought to the UK by Lord Elgin in the early 1800s. However, the British Museum trustees highlight in a statement that Greece has never asked for the marbles to be borrowed, only for their permanent removal.

There were originally 92 metopes on the Parthenon: 14 on the east and west sides and 32 on the others. Though most of them were destroyed, one remains in the Acropolis Museum, one in the Louvre and 14 are in the British Museum.