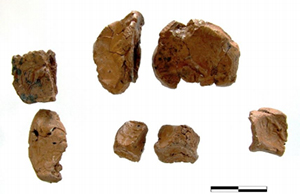 Ιστοσελίδα
Minoan sealings recovered at the site of Akrotiri in Thera (courtesy of the Akrotiri Excavation archive, Archaeological Society of Athens).
10 10 '16 11:29

“Αdministrative hierarchy and synergy in the Minoan Neopalatial period.” Lecture in Greek by Artemis Karnava (Inscriptiones Graecae – Berlin – Brandenburg Academy of Sciences). The lecture is part of the Aegean Lectures organized by Aegeus – Society for Aegean Prehistory and the Swedish Institute at Athens.

The Neopalatial period in Crete, a time that exhibits all the characteristics of the culture that we have come to think of as Minoan, is a period that saw a number of social innovations being introduced and established. Among these was a state administrative system that employed script and seals as power insignia and control media. Using as a starting point Minoan sealings that have been recovered at the site of Akrotiri in Thera we will examine how it appears that this novel system functioned, what were its characteristics and capabilities. After more than a century of research into Minoan writing and sealing systems, the Minoan Neopalatial administrative system stands out in the study of the ancient world as a complex and original invention, unique and socially valuable during its heyday.