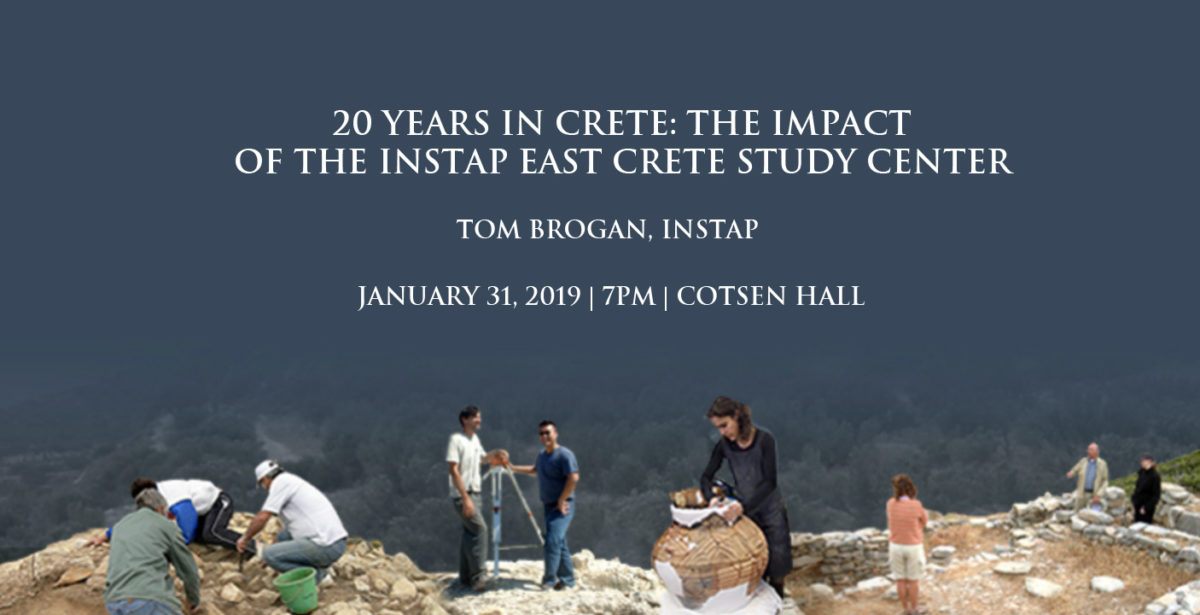 Since 1997 the foundation has worked closely with the Lassithi Ephorate of the Greek Ministry of Culture, INSTAP, and several projects of the American School of Classical Studies to develop a comprehensive approach to excavation, study and heritage management.
29 01 '19 11:45

20 Years in Crete: The Impact of the INSTAP East Crete Study Center

Tom Brogan, INSTAP will talk about the “20 Years in Crete: The Impact of the INSTAP East Crete Study Center”.

Last year the INSTAP Study Center celebrated its 20th anniversary, and this event provided a valuable opportunity to review progress and our underlying mission. Since 1997 the foundation has worked closely with the Lassithi Ephorate of the Greek Ministry of Culture, INSTAP, and several projects of the American School of Classical Studies to develop a comprehensive approach to excavation, study and heritage management. While archaeology has long stressed the importance of temporal, spatial or material changes in assessing ancient cultures, recent studies have also drawn attention to significant changes in the way archaeologists approach and recover the past. This review considers the evolution of the INSTAP Study Center in this light and its efforts to meet the emerging needs of the wider archaeological community on Crete and in the Aegean.

Our primary goal has always been helping excavators prepare ancient material for study and publication, often through the INSTAP Academic Press. In 1997 our foundation helped 4 surveys and 4 excavations of the American School of Classical Studies (some in collaboration with members of the Greek Archaeological Service).  By 2018, we were assisting many more ASCSA projects and had expanded our staff and facilities to help colleagues in the Lassithi Ephorate of the Ministry of Culture and several foreign schools and Greek universities.  On Crete during this period we hosted approximately 150 projects with 1500 members and 250 individual scholars.  Since 1999 the INSTAP Publication Team extended these services to an even wider community (ca. 25-40 projects per year) working on Crete, the Greek Mainland and Islands, Cyprus and Turkey.

The final step in this heritage paradigm concerns efforts to share new discoveries from the Greek past with the wider scholarly community and the local and foreign lay audience.  This work includes the Study Center’s Newsletter, KENTRO, and our annual summer lecture series. Every year the staff also provide tours to student groups from Greek, European and North American Universities and at least 10 primary and secondary schools in the Ierapetra Municipality.  We also work closely with the Lassithi Ephoreia to improve public access. We have installed paths and signs in English and Greek on site and assisted with the new displays of finds in the museums of Haghios Nikolaos, Ierapetra, and Siteia. We are proud of all these efforts because they have the potential to impact the widest audience and bring a degree of closure to the projects we have supported.