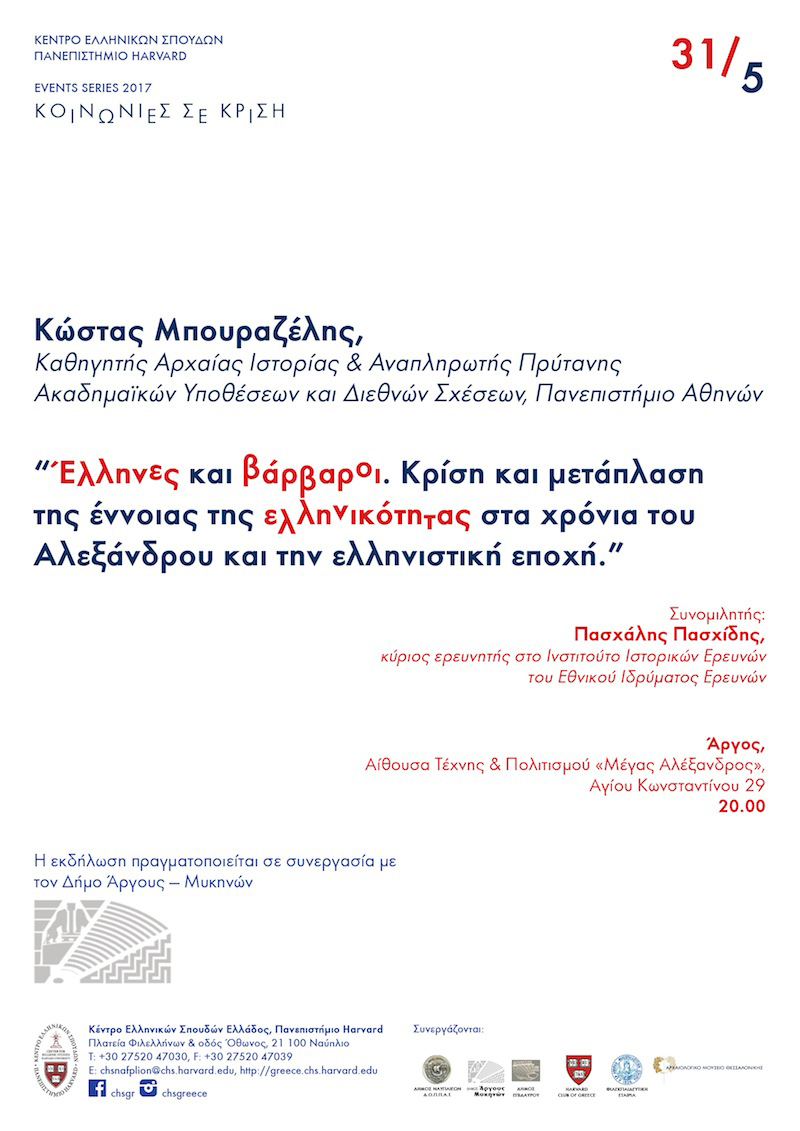 The Centter of Hellenic Studies / Harvard University organizes a lecture by Kostas Buraselis (Professor of Ancient History & Vice Rector of Academic Affairs and International Relations, University of Athens) on “Greeks and barbarians. Crisis and transformation of the notion of Greekness during the years of Alexander and the Hellenistic period”.  The lecture will be delivered in Greek.

The event is organized in collaboration with the Municipality of Argos-Mycenae.

The Greeks-Barbarians paradigm defined to a significant degree ancient Greek perceptions during the classical period (especially after the Persian Wars and the reinforcement of Greek self-consciousness). The contrast between the world of the citizens of the Greek world and foreigners, who by virtue of their racial origin did not participate in this world, seemed polarized, despite the possibilities and practices of contact. These contacts, together with the profound crisis of the mainland Greek cities in the 4th century BC, and the channeling of a large number of Greek mercenaries into the Persian empire, now led to a crisis of Greekness, a concept hitherto cherished with arrogance. A fundamental change in this reality began (and continued to evolve) from the times of Alexander the Great. The conquest of Asia and Egypt by the Macedonian king created the need for a new world order in the Mediterranean East and laid the foundation for the effective revision of the antithetical paradigm. Alexander took a leading role in recognizing this de facto new reality and, by extension, in transforming the earlier contrast of Greeks and Barbarians into a distinction: ‘Greeks=civilized people’ and ‘Barbarians= ‘those unreceptive to such education and consequent identity’. This process continued in many ways during the Hellenistic years that followed, and already in the 2nd century B.C. was recorded by the great Ptolemaic scholar of Alexandria, Eratosthenes.

Kostas Buraselis is Professor of Ancient History and Vice Rector of Academic Affairs and International Relations, National and Kapodistrian University of Athens. His research focuses on: the political and institutional history of the Hellenistic world, the history of the institutions of the Roman state (republican and imperial period), the institutional and social evolution of the islands of the Aegean in the Roman period, the imperial cult in the ancient world, the modern historiography about the Greek-Roman antiquity. He has published four books and edited the publication of many collective volumes on this related theme.

He studied History at the University of Athens, where he received a PhD in Ancient History in 2003. He has been working in the Greek and Roman Antiquity Division (now part of the Institute of Historical Research) of the National Hellenic Research Foundation since 1995 (as a researcher since 2006). He has also been a visiting professor at the International University of Greece and a partner in Greek and foreign programs. His research interests focus mainly on the collection and publication of epigraphic evidence from Macedonia, on the institutions and politics during the Hellenistic period, as well as on the formation of ethnic, cultural, religious and political identities in the ancient world.