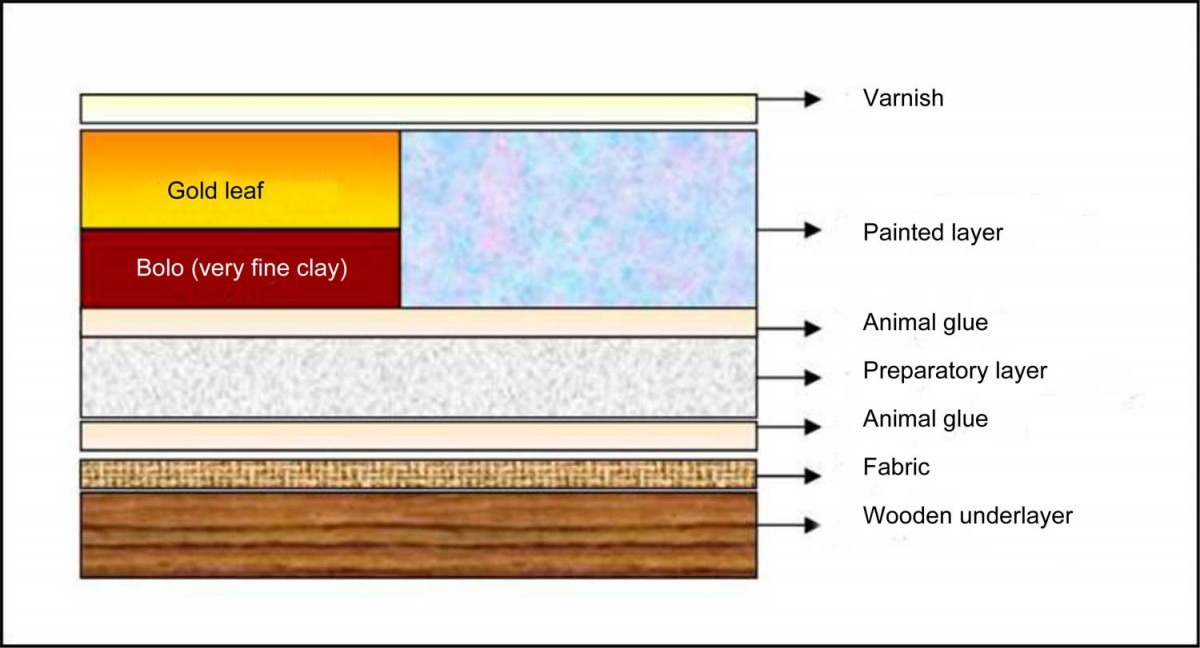 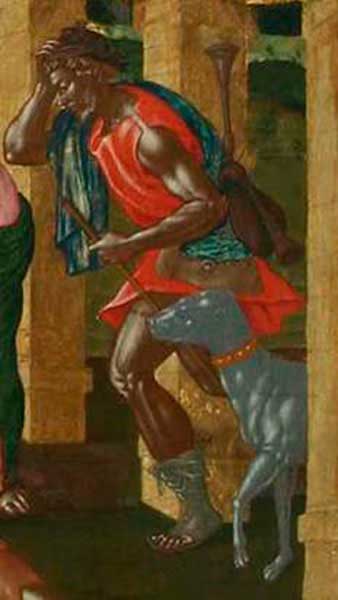 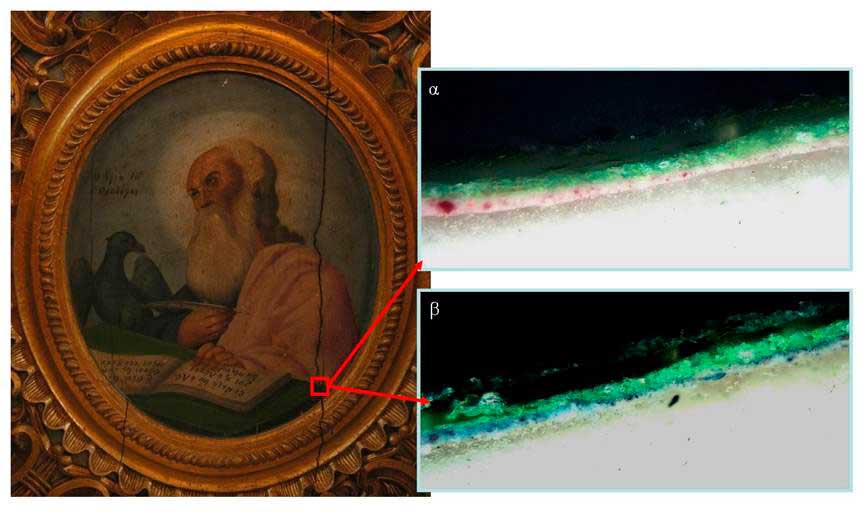 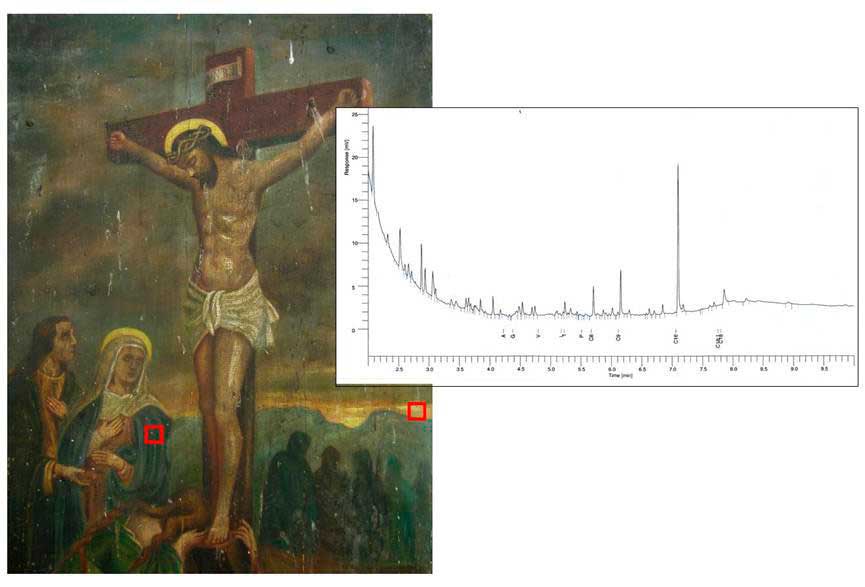 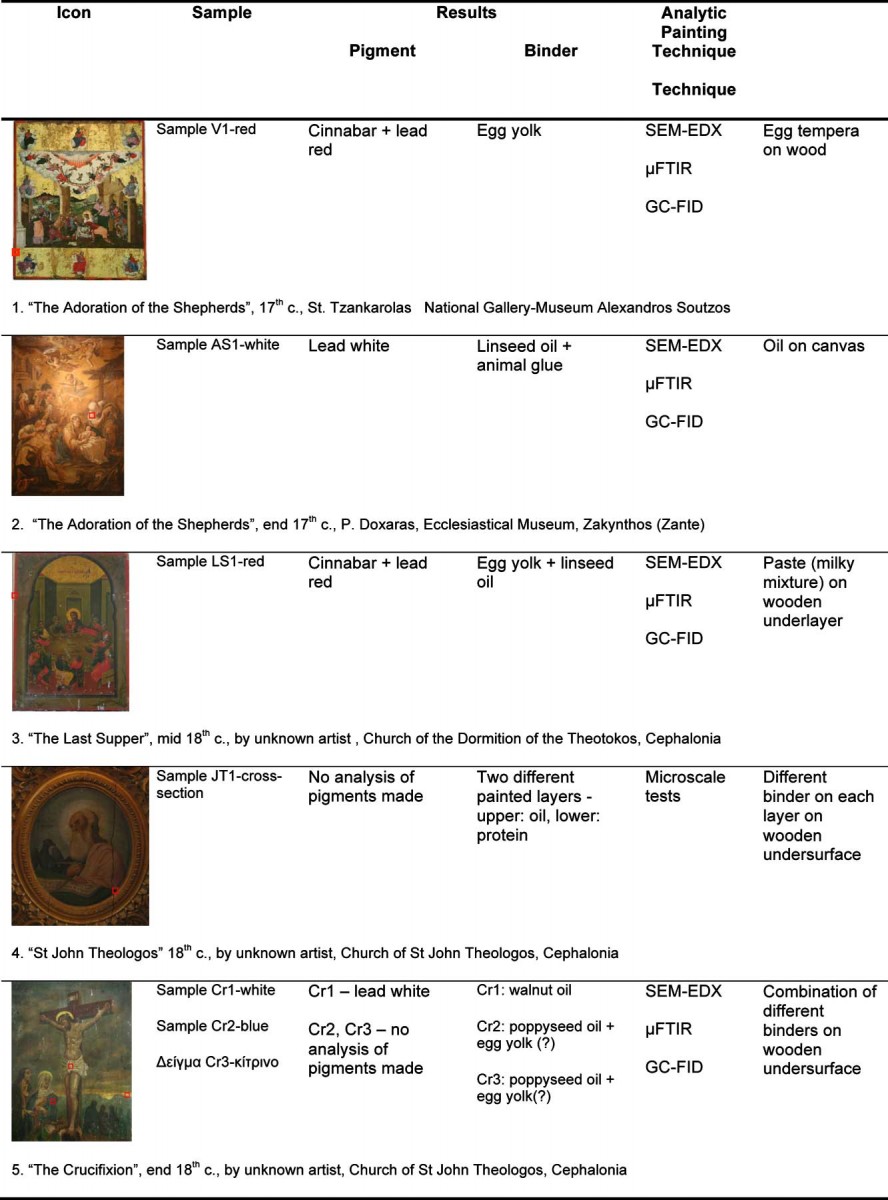 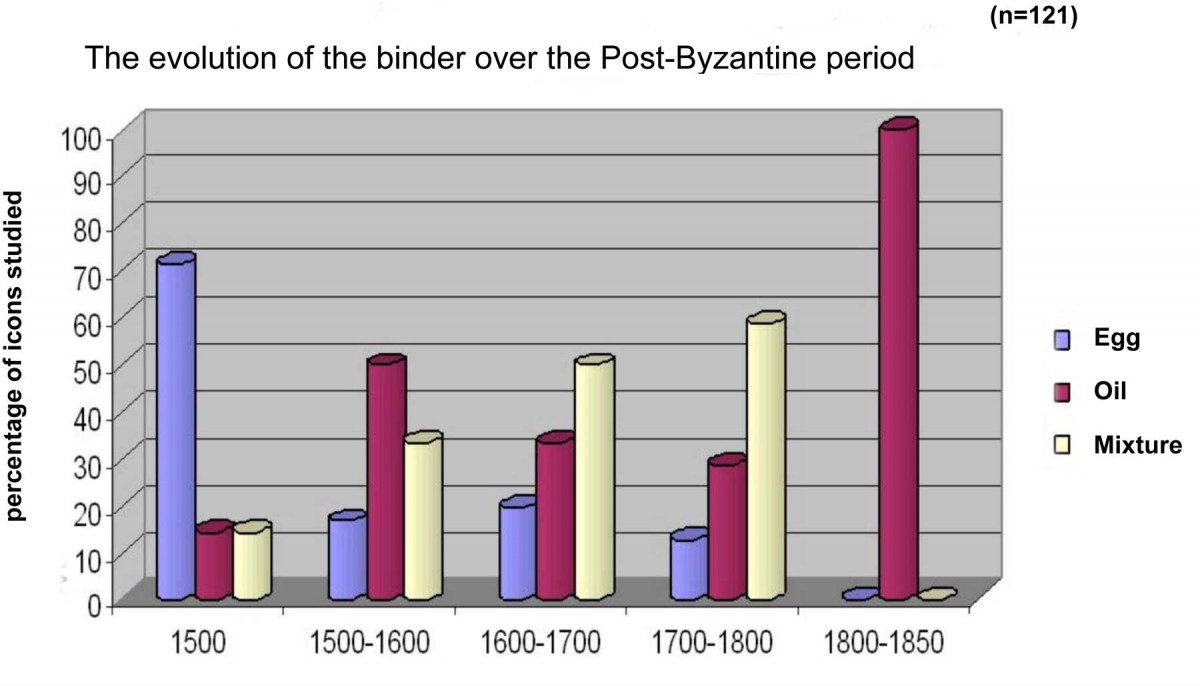 The Post-Byzantine iconography of Crete and the Ionian Islands

The Post-Byzantine art of iconography was the result of a transitional period during which, painters, directly influenced by the West, dared to incorporate “modern” materials in their technique, to free themselves from the severe style of Byzantine art, and prepare the way for Modern Greek art.

The fall of the Byzantine Empire in 1453 marks the beginning of one of the most important periods of Greek Art History (note 1). The Post-Byzantine period which lasted till the early 19th century, was the transitional period during which, essentially, the frontiers to the West are opened up (note 2). Venetian Rule, many artists going mainly to Venice, trade, as well as the fact that art, at that time, experienced important and determining changes in the West, led to the birth of important schools of painting, the foremost being the Cretan School (1453-1669) and that of the Ionian islands (1669-1833).

At the same time, the art of religious painting on wood gradually changes style: from being religious it becomes secular. Simultaneously the technique appears different: the artist changes his medium and from using egg tempera on a wooden surface, introduces oil painting on canvas. Moreover, cultural influences brought a change to the types of iconography: the artist escapes from the strict byzantine rules of depiction and acquires freedom of expression.

How did these changes come about however? Was there a “transitional” technique during which artists, along with incorporating western elements in their composition, gradually introduced materials that were different to those dictated by Byzantine technique or did they abruptly change from the technique of egg tempera to that of oil painting?

The sciences, now offering the possibility of reconstructing an artist’s technique, come to answer questions that have preoccupied researchers over many years. The aim of this specific survey was to describe the materials that made up icons so as to trace possible modifications in technique resulting from Western influences.

The technique of icons and their scientific study

The typical structure of a Byzantine icon (fig. 1) is made up of the wooden under surface, the use, often, of a piece of fabric, layers of animal glue, the layered colours that are mixtures of pigment with egg yolk, the bolo (a very fine clay) and gold leaf in the case of gilding and last the layer of varnish. The layer that indicates any changes in the artist’s technique is the coloured one. This occurs because a technique is defined by the organic binder of its pigments. For example, oil painting means painting with oil, while egg tempera is painting with egg.

The techniques and materials used by the artists are directly linked with the period in which the latter lived and worked and the influences they received. A work of art can supply precious information on the artist, the period, the artistic movement and of course the materials and the method of construction used in order to create a specific work. Physicochemical research is able to define an artist’s materials and technique and place the work in a timeframe. This particular study focused on the painted surface since, as referred to above, the surface is that which defines a technique, so as to trace any possible change to occur from Western European influences on Greek Art.

The materials which make up an icon are of organic and inorganic origin. While identifying inorganic material is a routine matter, determining the organic mediums is still a complicated process. What is more, taking a sample from an icon is a difficult undertaking if it should affect the work as a whole. Usually the required quantity is at least 1 microgramme of shavings extracted from the painted surface. The methodology of the present study is based just as much on the complexity of analyzing a sample of painting, as on the latter’s restricted size so as to secure the maximum information (from each sample to be analyzed).

Thus an analytical method was developed of study and analysis which would supply information both on inorganic and organic materials from each unique sample. The original aim was to trace the pigments that each painter had used and then to identify the binding medium with which the colours were mixed.

As a result, the analysis began with non destructive techniques to collect as much information as possible before processing each sample so as to be used for catastrophic techniques such as gas chromatography.

Thus the analytical method included recognizing the pigments with the use of electron microscopy with SEM-EDX Xrays, identifying pigments and organic materials with infrared spectroscopy IR and, when considered necessary, the Raman technique was used to collect the same type of information and last the technique of gas chromatography was used for the exact determining of the organic binders. In cases where collecting a sample was not possible and there were visible damages, a vertical cross section was collected so as to be studied under a microscope and to conduct a series of microchemical tests which are able to indicate the identity of the organic material.

In order to implement the specific method, a series of trial samples were made up, based on traditional Byzantine and Western European techniques (notes 3, 4, 5, 6), then aged artificially and studied by the same experimental process.

Important sources of bibliography such as the 18th century Interpretation of the Art of Painting by Dionysius of Fourna, describe in full the Byzantine technique of painting the saints (iconography). At the same time, sources such as the 15th century Il Libro del’Arte (The Book of Art) by Cennino Cennini as well as the 19th century Περί Ζωγραφίας (On Painting) by Panagiotis Doxaras describe western European techniques.

According to these sources, Byzantine painters, on the one hand create their works using a series of specific pigments such as cinnabar, lead white, minium etc. mixed with egg yolk as a binder to create the painted layer. On the other hand, Western painters dare to experiment with different materials, and while their (colour) palette is not so different to that of the Byzantines, with the exception of a greater freedom in the use of more colours and tones, the binder is that which is considerable changed. Initially the artists use a mixture of egg yolk with some type of oil (linseed oil, walnut oil, poppyseed oil) and then go on to adopt the exclusive use of oil.

More analytically, it is obvious that initially the painters followed Byzantine models, even when the manner in which they render their composition is influenced by iconographic types of Western painting. A typical example is the work of Stephanos Tzankarola “The Adoration of the Shepherds” where, despite the fact that the painter is obviously influenced by Western European painting (fig. 2), we observe that his technique remains profoundly Byzantine, which is proved by tracing the technique of egg tempera.

Panagiotis Doxaras, on the other hand, is an artist who was influenced to a great extent by the West but who also tried to convince his contemporaries to follow Western models through his writings. The physicochemical study of his work “The Adoration of the Shepherds” proves that from very early on there were painters that liberated themselves completely and abandoned the strict Byzantine style adopting other materials. To paint this specific work, Doxaras used linseed oil on canvas.

Another very interesting case is that of the “Last Supper”, an 18th century icon by an unknown artist, from the Church of the Dormition of the Theotokos (Mother of God) in Cephalonia. An in depth research of the work proved that the artist used a mixed technique of egg and oil for the painted surface, such as is encountered in works of Western painters. Moreover, in a sample from a red region, analysed for its ingredients, it was found that the artist had used a mixture of two different red pigments: cinnabar with lead red. According to manuals of artists of the period, this mixture of specific pigments was often used, first because cinnabar was difficult to find and second because it was very expensive. It was therefore usual to mix it with lead red, that produced a similar result. It was also usual for it to be adulterated before reaching the artist, hence Cennino Cennini’s advice in the Book of Art where he writes characteristically “always buy cinnabar whole, unbroken and not ground. Why? Because it is often adulterated with minium and the crushed dust from tiles”.

Another different technique is observed in the study of stratigraphy in the 18th century icon of “St John Theologos” by an unknown artist, in the Church of St John Theologos in Cephalonia. Here the presence of different painted layers can be traced and the use of different binders on each layer (fig. 3). More specifically, the painter experiments with the use of different materials on each layer. Thus he has used a protein binder for the lower level and oil on the upper painted layer, showing that he has incorporated western elements in his technique.

Last, the “Crucifixion” a late 18th century work by an unknown artist, situated in the Church of St John Theologos in Cephalonia, shows the incorporation of Western elements in the artist’s technique through a bold use of modern materials for that period. In this work, the physicochemical study traced the use of different binders on the same painted layer. The use of walnut oil was traced in a white pigment and the use of poppyseed oil with traces of egg yolk for the yellow and blue sections (fig.4). According to bibliographical references (notes 7, 8), the use of specific oils that dry out are suitable for the specific colours, because it does not affect their hue with the passage of time.

Till quite recently, physicochemical research was an unknown tool in the field of art. Lately, however, it has steadily acquired a more important role. The study of a work and particularly an icon helps in the understanding both of the creative conditions and of reconstructing the artist’s palette.

This particular research with multi methods managed to collect precious information concerning the artists’ technique and to offer scientific confirmation on the technological background that was, till today, based on various treatises written by the artists of the period. Moreover, it proved that the painters of the Post-Byzantine period from the Schools of Crete and the Ionian Islands were deeply influenced be Western European painting in various ways.

According to Bar diagram 1 directly after the fall of Byzantium up to the early 16th century, painters faithfully follow the Byzantine tradition. Very slowly they start to use different ways of expression through the use of oil and its mixture with egg yolk. In the 16th century, these two tendencies prevail, while in the two subsequent centuries, painters mainly use a milky mixture of egg and oil ending in the technique of oil painting finally prevailing.

All results led to a basic conclusion: the cultural exchanges between Western Europe and Greece of the Post-Byzantine era deeply influenced the art and technique of religious painting. Painters drew on Western Europe for examples and materials so as to free themselves and move on to more contemporary trends of that time.