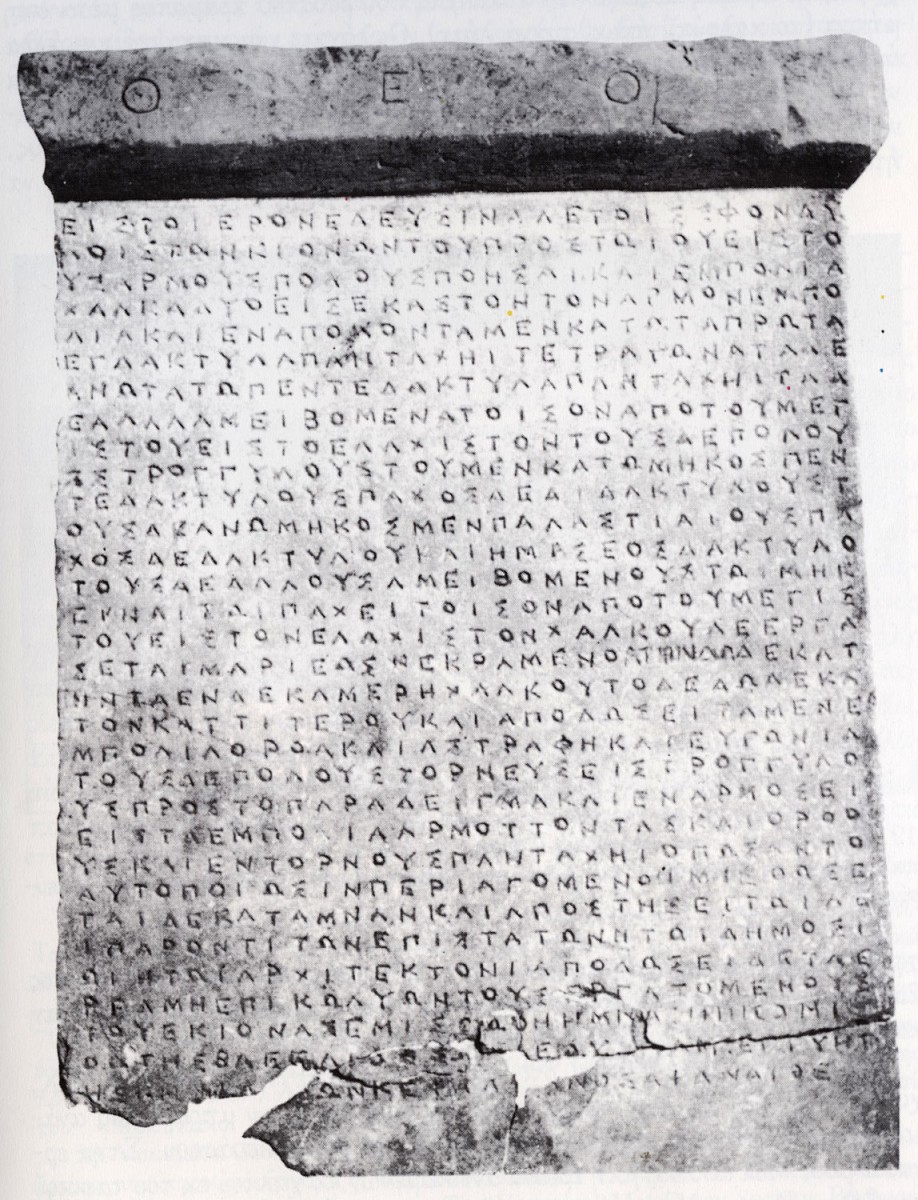 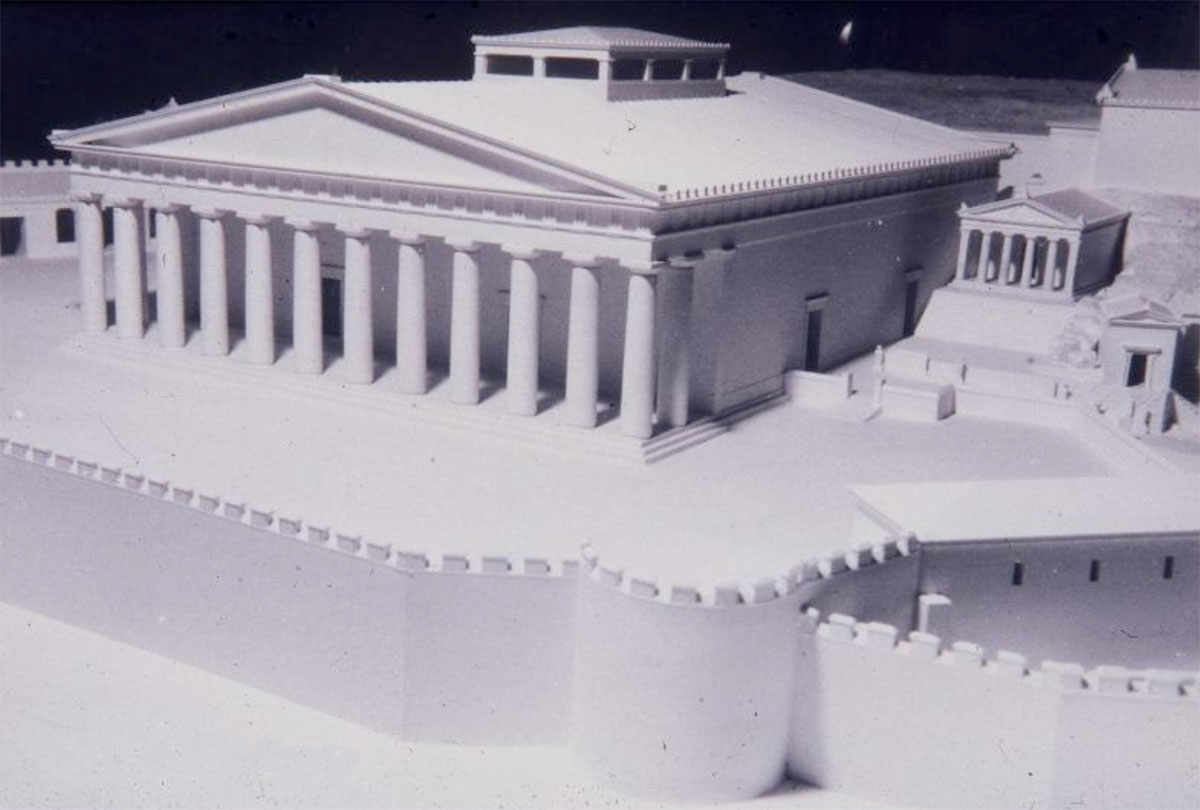 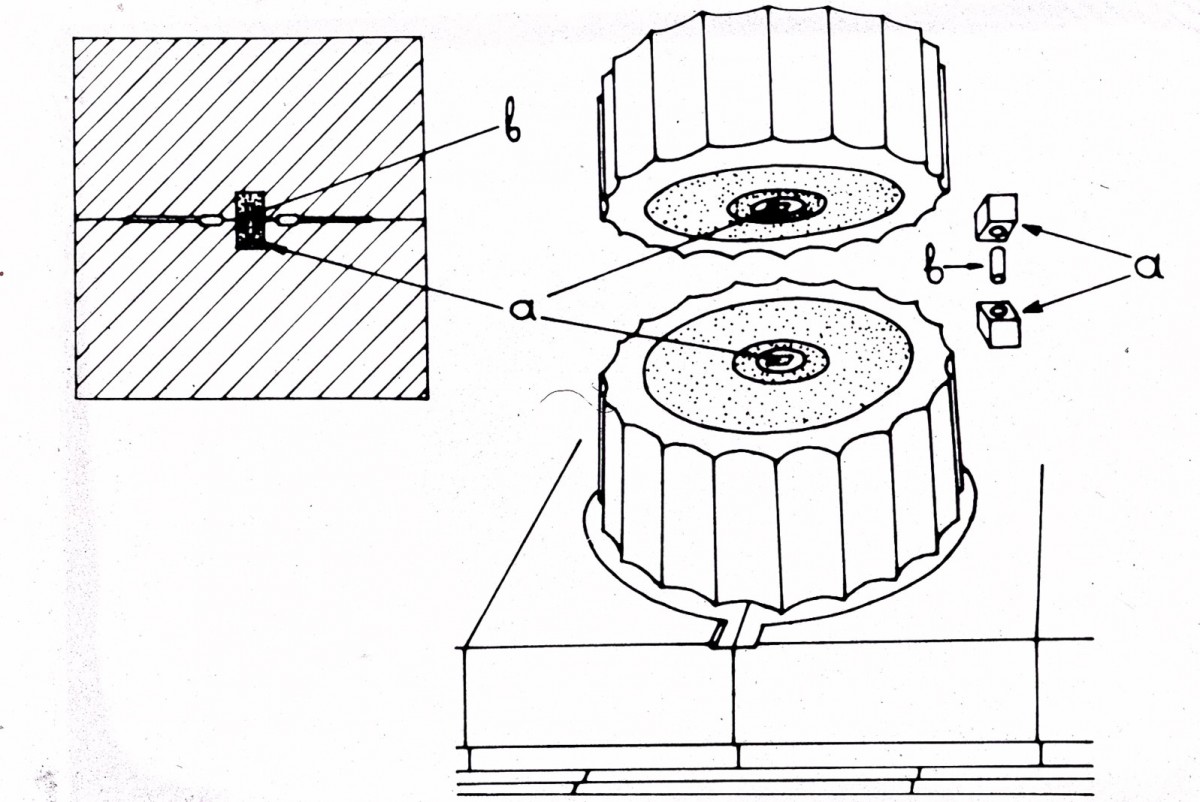 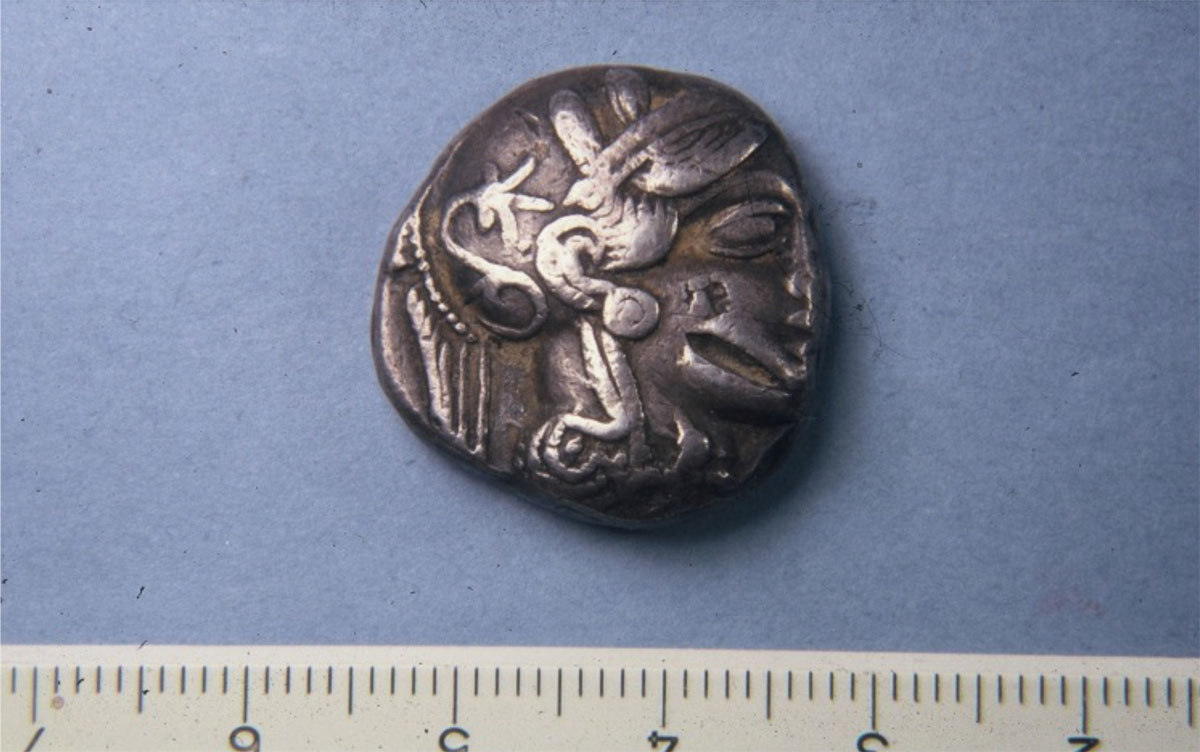 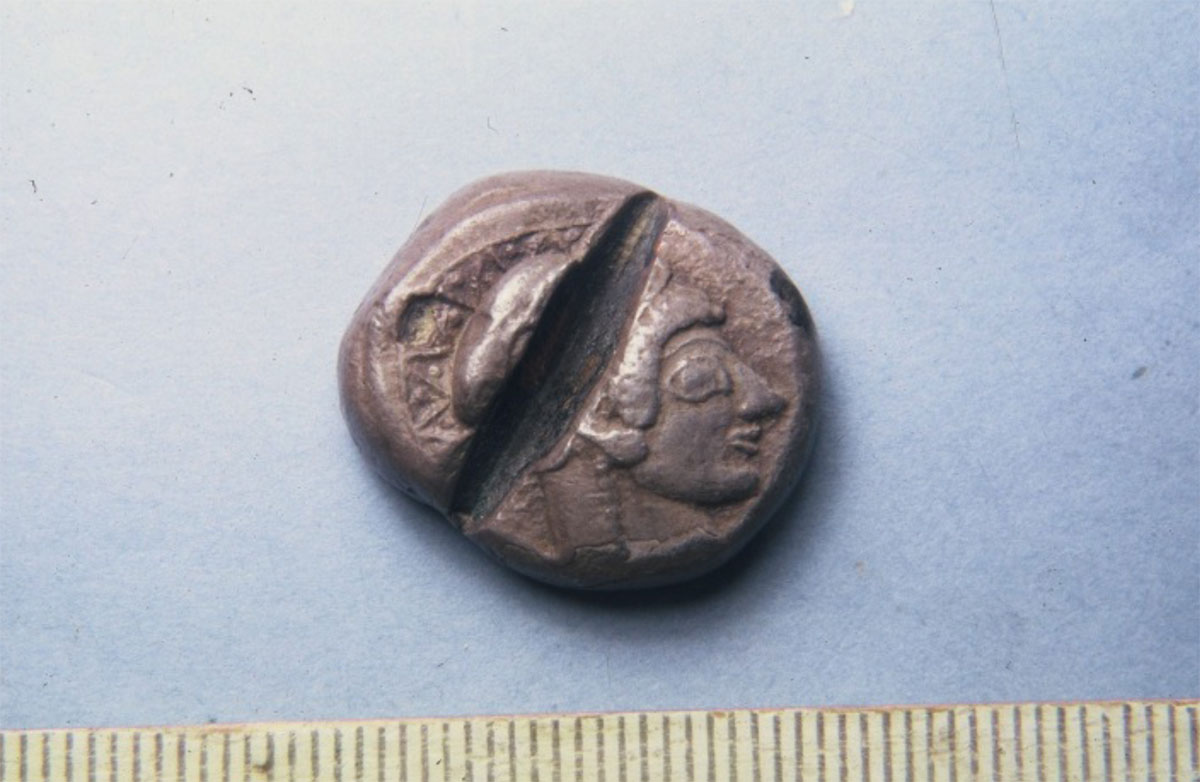 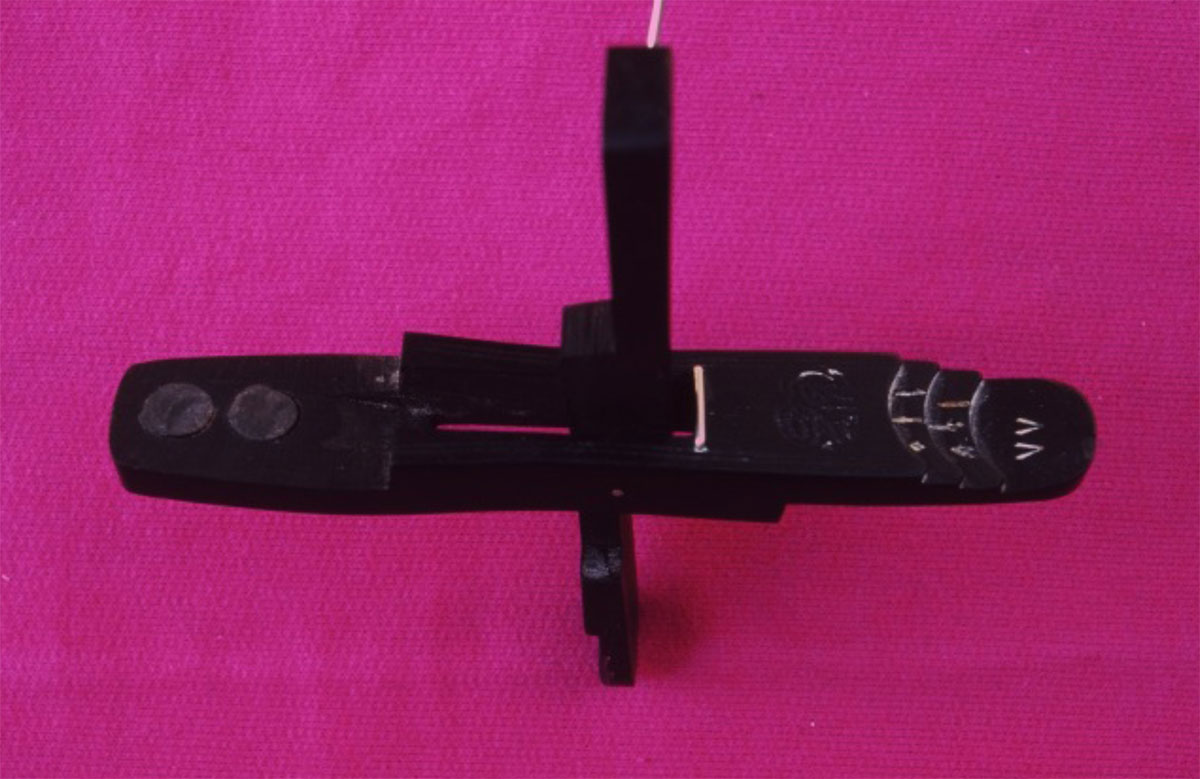 The inscribed stele of Eleusis and quality control in antiquity

In 1863, D. Filios discovered an inscribed stele of the 4th century BC (fig. 1) in Eleusis. The study of its text by the author led to a very interesting conclusion; this inscription is the most ancient example of its kind with strict specifications for the manufacture of bronze fittings known as empolia and poloi, that is, the bronze dowels used to join the drums of the columns of the Portico of Philo, a beautiful building that was to be erected in front of an earlier temple, the well known Telesterion of Eleusis (fig. 2.).

The specifications concerned the chemical composition and the manufacturing of the bronze fittings (fig. 3) but especially that of the poloi.

At some point, the inscription mentions the following interesting fact: «Τους δε πόλους τορνεύση κατά το παράδειγμα…». Meaning “to shape hard bronze on the lathe into cylindrical dowels (b) according to a particular sample…”

This would mean in free translation: ”the copper must be produced in Marius, Cyprus (a large commercial and metallurgical centre in antiquity) and of its twelve parts, eleven were to be of copper and one of tin”. That is, approximately 8,33% to 8,50% in our system.

At this point it should be mentioned that when the ancient Greeks referred to copper they meant both that particular metal but also krateroma (commonly known as brass or bronze) which is an alloy of copper and tin. The same applies to iron. They meant soft iron but also hard steel, that is an alloy of iron and carbon (in the form of cementite, Fe3C).

Study of the inscription’s text lead to the astounding conclusion that the ancient Greeks applied standards with strict requirements in each case. This means that there was also a definite quality control. Otherwise the text’s specifications (and other specifications as well) would have been of no value and there would have been great danger of fraud.

At this point it would be worth mentioning that the price of copper was 35 drachmas per talent, while that of tin was 230 drachmas, in other words, approximately seven times higher. The author confirmed that the combined weight of the columns of the Portico of Philo exceeded 3 tons (3,300 t), based on the following data given accurately by the inscription: the number of the actual columns, the number of their drums, the dimensions of the empolia and poloi. The content in tin may have been 8,33%, but the actual mass of this metal when used would in fact represent 37% of the alloy’s total value, since as was stated, its price was 7 times greater than that of copper.

All the above further support the theory that there definitely must have been an empirical method for quality control. One of the possible ways would have been the comparison between the colour of the finished alloy and that of a series of standard samples. The author of this paper cast a series of bronze (krateroma) samples which had a 2% difference in tin content. With this available series, he compared an unknown sample with the former ones and the comparison was actually successful. It should be noted that if there was fraud, it would not have been of the order of 1 to 2% (owing to the casting process) but greater than 3 to 4%.

Finally, it is interesting that the last two lines of the inscription refer to the names of both the project’s contractor and more importantly to that of the guarantor who would monitor the whole construction process as well as paying the guarantee for the proper carrying out of the order.

Through his extensive research, the author concludes that, in antiquity, there was quality control not only of metals but of all marketable products. Such an example is wine that was watered down (κεκραμένον) when drunk at symposiums. When sold, however, it had to be neat and according to the law of the fraudulent watering of wine («ύδατος της παραχύσεως»), the fine paid by the merchant was a very heavy one if the product was adulterated.

Last it is worth mentioning the authentication of Attic currency which could also be included in its quality control.

The pictured inscribed stele of 375 BC was found in the Stoa of Attalos and refers to the quality control of Attic currency by specialized state inspectors, the assayers.

Figure 5 depicts a genuine 5th c. BC Athenian coin while in figure 6 a counterfeit 6th c. BC coin is shown with a cut right across it. It should be noted that all counterfeit coins, once cut across, were dedicated to the sanctuary of Cybele, Mother of the Gods.

The method of coinage control

One practical method of control could be achieved by using portable scales like the one in figure 7. Of course, the pictured scales are not ancient but belong to the Ottoman period. The author however believes that similar scales could have been used in antiquity.

As shown in figure 7, counterweights were incorporated in one of its sections while in the other were slots of a particular diameter and depth where the coins to be tested would be placed. In this way:

a) The coin’s mass and dimensions could be checked.

b) If the coin was the proper weight, then it was considered authentic.

c) If the coin being tested was lighter because it was a silver plated copper coin, or heavier if it was of silver plated lead, it had to be considered as counterfeit. In that case, it was cut right across by the assayer (fig. 6) to render it unusable and then it was confiscated.

Apart from the method just mentioned, however, according to an assayer currently employed by the Bank of Greece, the authenticity control could be based on a procedure using the three senses: namely sight, touch and sound.

So this is what is done by an experienced assayer:

a) He very carefully observes the coin, whether silver or gold, b) He feels it with his very sensitive fingers, c) holding it in his palm, he estimates its weight and finally he lets it fall on a hard surface and listens to the sound it makes. As I was told by other specialists in the field, such as jewellers, by this method they can easily authenticate a gold or silver coin.

It is worth mentioning that in his play “The Frogs” Aristophanes describes the sound of authentic coins, when they strike a hard surface, as «κεκωδωνισμένα» meaning proven authentic by their ringing sound. Therefore, by combining his senses, an experienced assayer could check with certainty the authenticity of Attic silver currency. When, however, in the slightest doubt, ancient Greek assayers could combine the use of portable scales with the previously mentioned method of the three senses.

Assistant Professor of the University of Athens