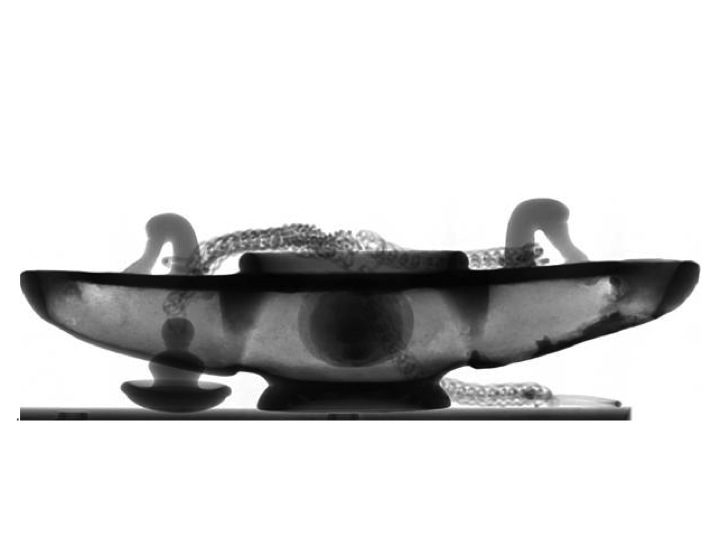 For the first time, neutron images in 3 dimensions have been taken of rare archaeological artifacts here at ORNL. Bronze and brass artifacts excavated at the ancient city of Petra, in Jordan were recently imaged in 3 dimensions using neutrons at HFIR’s CG-1D Neutron Imaging instrument. The data that is now being analyzed will for the first time give eager archeologists and ancient historians significant, otherwise wholly inaccessible insight into the manufacturing and lives of cultures that once occupied settlements within the Roman Empire, Middle East, and Colonial-period New England.

The samples that were imaged in 3-D in August came from the collections of the Joukowsky Institute for Archaeology and the Ancient World at Brown University. They include an elaborate hanging bronze oil lamp, a large Roman coin, and – most charmingly – a standing dog figure, which might have been either a religious dedication or perhaps a toy. Although their original provenance is unknown, they are all excellent examples of common metal finds from antiquity.

Since 2008, the team has been doing two-dimensional imaging of copper alloy (bronze and brass) artifacts both from Petra and from Greene Farm, a colonial-period plantation in Rhode Island. The samples include artifacts from daily life: a clothing buckle, a knife, and some building hardware. One circular object from Petra was so corroded that it was unidentifiable. But when it was imaged with neutrons, underneath was a piece of jewelry, probably an earring. Petra is most famous as a trading center in ancient times, connecting the Mediterranean world with places as far away as India and China. It was the capital of an independent kingdom of the Nabataeans, until the emperor Trajan incorporated it into the Roman empire in the early second century AD.

The earlier imaging and analysis resolved some questions of object identity and raised many new ones about the techniques and materials that craftspeople in the past used to make these objects. “We can also examine certain objects (such as the knife or the bronze lamp) to look for trace residues of the oil once burned in the lamp, or what the knife was used to cut,” says Ryzewski.

“I first learned of the developing neutron imaging instruments at Oak Ridge in my conversations with Hassina Bilheux (lead instrument scientist on the CG-1D). At the time I was a postdoctoral fellow in archaeology and engineering at Brown. I attended a neutron imaging workshop at SNS in November 2008, and became the only archaeologist to be part of the VENUS instrument development team. Brian Sheldon at Brown also joined then. We have been collaborating on all of the experiments with Hassina at the SNS and HFIR,” she said.

The neutron imaging beam is a huge step forward for these scholars. “Archaeologists and scientists can obtain relatively little information about the manufacture of archaeomaterials, ancient objects and the materials fromwhich they are constructed, from external surfaces alone,” says Ryzewski. “Very few historical accounts describe the construction of such objects and archaeomaterials, ancient bronzes or ceramic vessels. The only source of information about how these objects were constructed comes from their material properties and composition.”

Archaeological objects are reviewed as unique cultural resources. Earlier analysis often entailed extracting a sample from such an object, which meant damage and sometimes even wholesale destruction of an artifact, so it could be mounted effectively for analysis. Analysts’ necessarily conservative treatment of archaeomaterials left many questions unanswered.

Imaging archaeological objects comprehensively and systematically with neutrons only became possible with the development of the CG-1D Prototype Beamline. Neutron activation analysis and neutron imaging at Oak Ridge means scholars can now conduct detailed, non-destructive analysis of samples. “There currently exist a vast array of archaeological objects and research questions about ancient and historical technological development that can now be posed,” says Ryzewski. “The CG-1D beam line has offered us an invaluable alternative for performing non-destructive, non-invasive analysis.”

CG-1D data can reveal the raw materials used, manufacturing techniques, historical development of alloys and composite materials, geological origins of ores and clay. On the cultural side, researchers can learn about the activities of daily life that such objects served for ancient people. “Archaeologists can now begin to precisely reconstruct past networks and patterns of resource extraction, trade and exchange, environmental impacts of industrial activities on ancient landscapes, and the transmission of craft production traditions over time,” Ryzewski says. “These are some of the sorts of questions that our current research and experiments are designed to address.”

The three-dimensional neutron imaging and quantitative analysis occurs at an instrument that is a time-of-flight beam line, with a chopper for producing pulses of neutrons to take non-invasive images. Neutrons, rather than X-rays do the work.

“Part of our early work was to test the parameters of the instrument and how we might need to adjust the instrumentation to suit the artifacts – which tend to be variable in composition, size, and density,” Ryzewski said.

“We anticipated that we would be able to see beneath the surface and find evidence of manufacturing steps (mold seams), impurities or other organic inclusions in the metals (pseudomorphs), residue from the objects’ use, and microstructural or compositional elements.” Their data are still being processed, but preliminary results from the bronze lamp suggest that they will be able to see and examine aspects of all of these areas of interest, once the 3-D data is compiled.

“Our work is still in its early stages. We hope to re-examine these objects in further rounds of testing in 2012. We will expand our sample base to other types of metal artifacts, perhaps some excavated from shipwrecks. We hope to examine ceramic artifacts as well.

More broadly, the scholars may be in a position to offer information to scientists who specialize in the conservation and stabilization of museum collections. Other findings may provide insights into materials behavior of interest to materials science. “Each round of experiments raises many more questions about the materials in the object and about the instrumentation itself,” Ryzewski said.

This fall the researchers return to HFIR to image some of the bronze objects for Bragg-edge peaks in such materials. Collaborating with Ryzewski and Sheldon, are Bilheux and Lakeisha Walker of SNS, Susan Herringer, a PhD student in Materials Science Engineering at Brown, and the Joukowsky Institute at Brown.

The group will publish their results in both archaeological and neutron sciences academic publications. They will present their initial findings at the annual Society for American Archaeology meetings, in Memphis, next April.