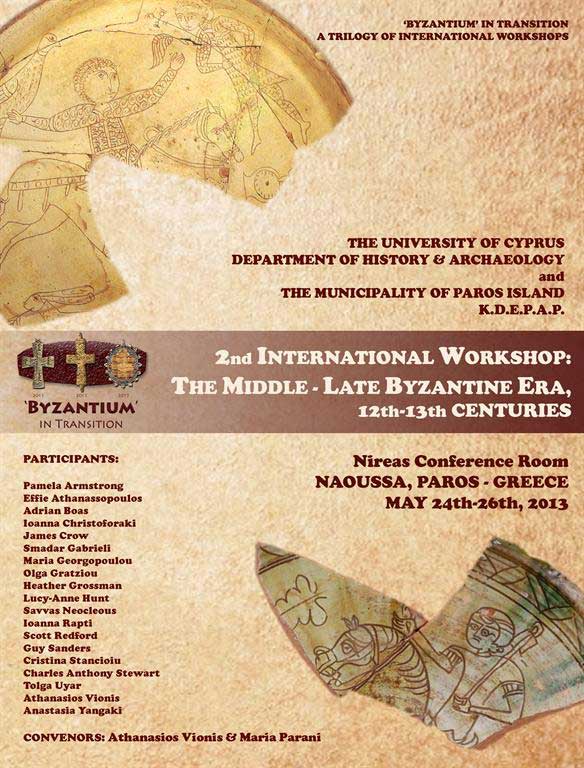 Byzantium in Transition is a trilogy of international workshops organised by the Department of History and Archaeology of the University of Cyprus. The aim of these successive specialists’ meetings is to shed more light on archaeologically ‘invisible’ eras or periods of major transformations in economy, society and culture after the end of Late Antiquity by (re) evaluating old and new archaeological data, namely dated to:

(b) the Middle to Late Byzantine or Early Frankish era, 12th-13th centuries, and

The First Workshop of the trilogy took place at the Archaeological Research Unit of the University of Cyprus in Nicosia, on October 28th-30th, 2011, and its aim was the exploration of the first period of transitions and transformations of the Byzantine era, i.e. the ‘Byzantine Early Middle Ages, middle 7th-8th centuries’. The Second Workshop of the trilogy is organised by the Department of History and Archaeology of the University of Cyprus in collaboration with the Municipality of Paros, and will take place on the island of Paros, Greece, on May 24th-26th, 2013. The Third Workshop is scheduled for May 2015.

Objectives of the Second Workshop

Building upon the ongoing interest amongst historians, archaeologists, and art historians in the encounter between Byzantine, Latin, and Islamic populations in the Aegean and the Eastern Mediterranean during the period that followed the Latin conquest of Constantinople in 1204, this Workshop wishes to gauge the socio-economic and cultural patterns of transformation that started to take shape already in the years preceding the Fourth Crusade and continued, or even accelerated, following the fragmentation of Byzantine territory into numerous smaller political entities throughout the 13th century.

The main aim is to shed more light firstly on the gradual transformation of settlement patterns (i.e. towns, villages, and rural lands) in the provinces, secondly on material culture trends and currents of trade (e.g. ceramics, foodstuffs) before and after the establishment of Latin or Seljuk rule, and finally on the long processes of osmosis of artistic fashions in painting and architecture between neighbouring (or different) regions and cultures (e.g. Byzantines, Latins, Seljuks, Syrians, Armenians). The geographical focus of the Workshop is mainland Greece, the Aegean islands, Crete, Asia Minor, Cyprus and the Levant.

Agenda of the Second Workshop

Two scholars set the methodological and historical framework discussing aspects of social and cultural transformation in the Eastern Mediterranean during the 12th-13th centuries in an introductory panel. Three sessions of five-seven 30-minute papers each, follow covering the six geographical areas of interest, and explore the themes of:

(a) townscapes and ‘rural’ space,

(b) economy and trade currents,

The convenors will undertake the editing and publication (with a major publisher in the field) of the research papers of the Workshop, appropriately developed so as to form coherent chapters in an edited volume.