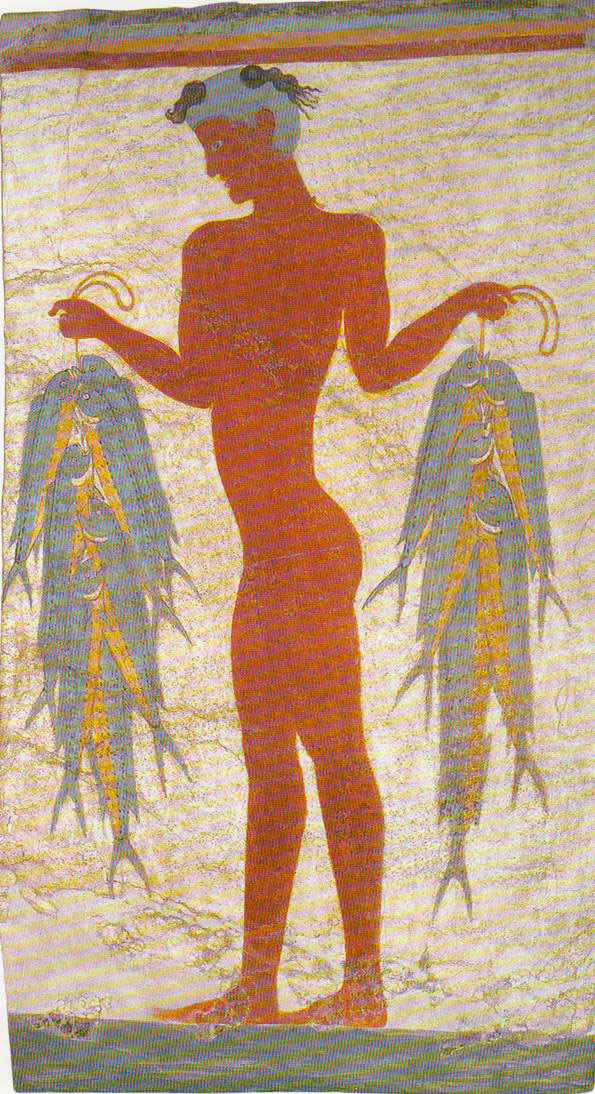 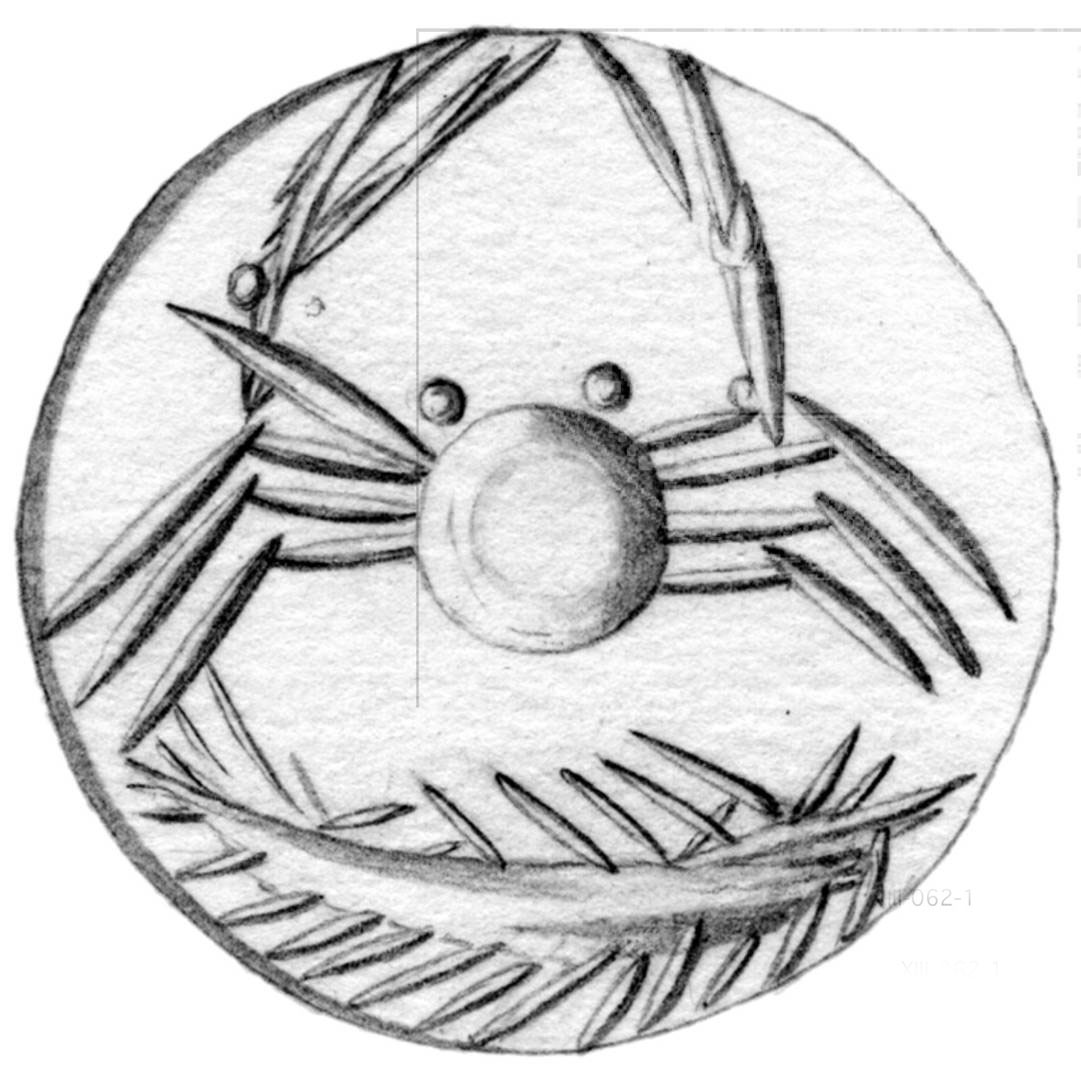 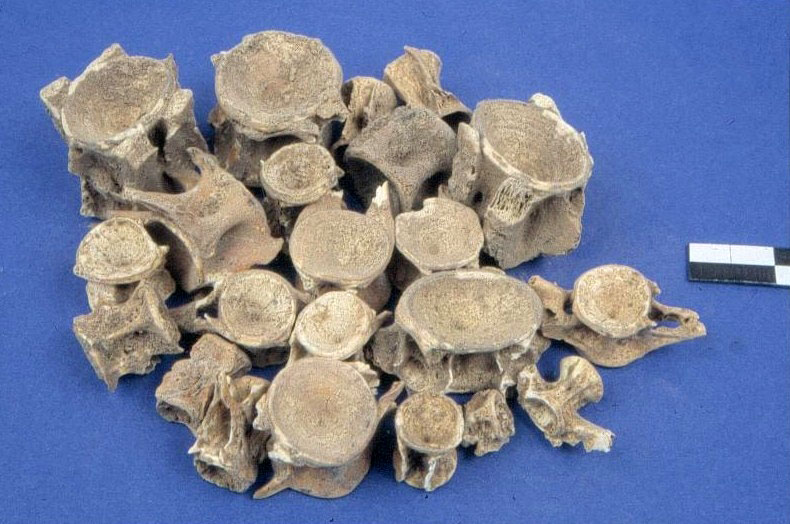 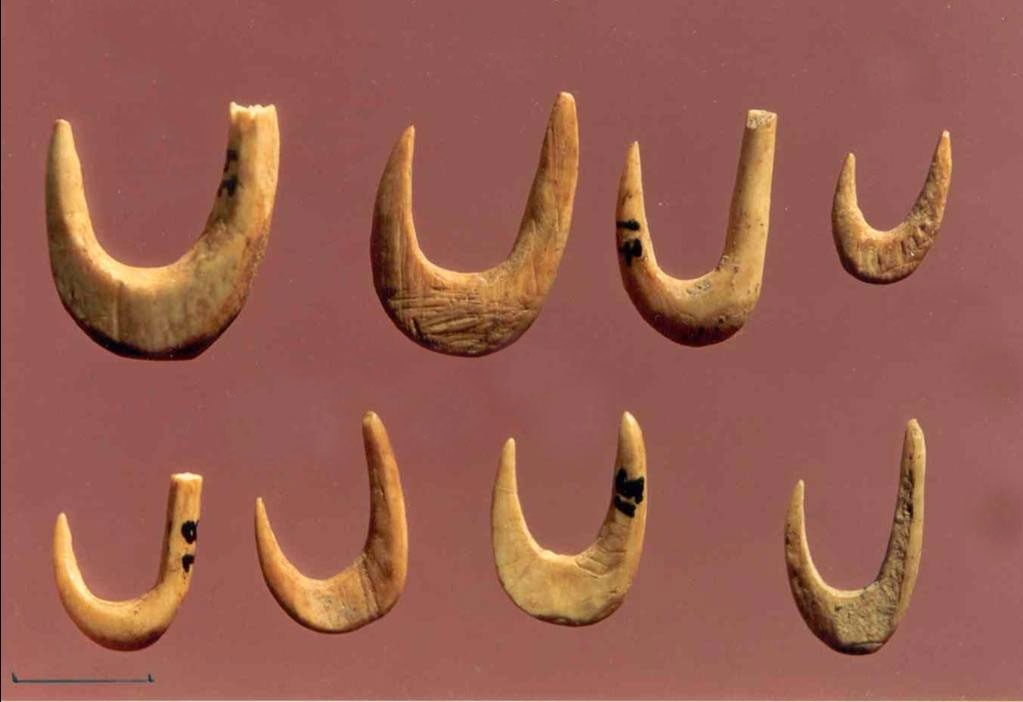 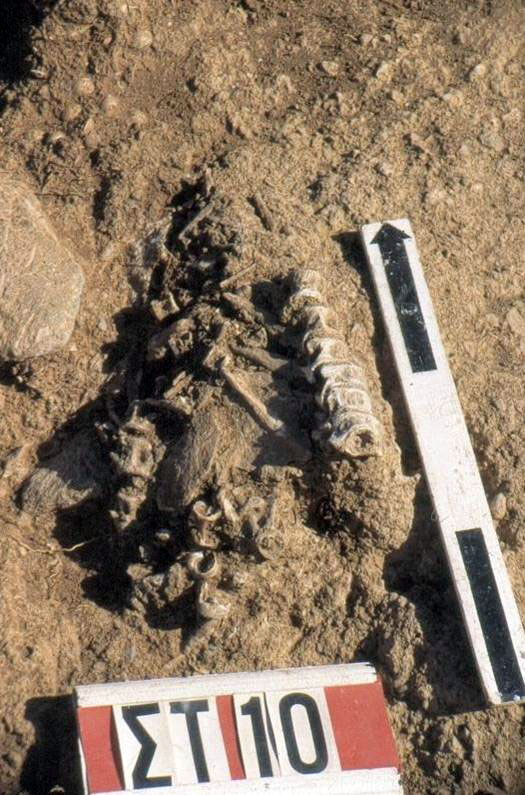 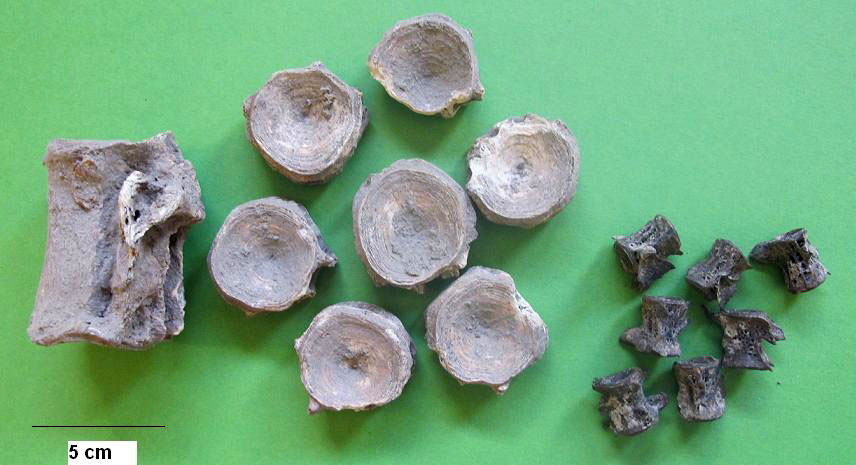 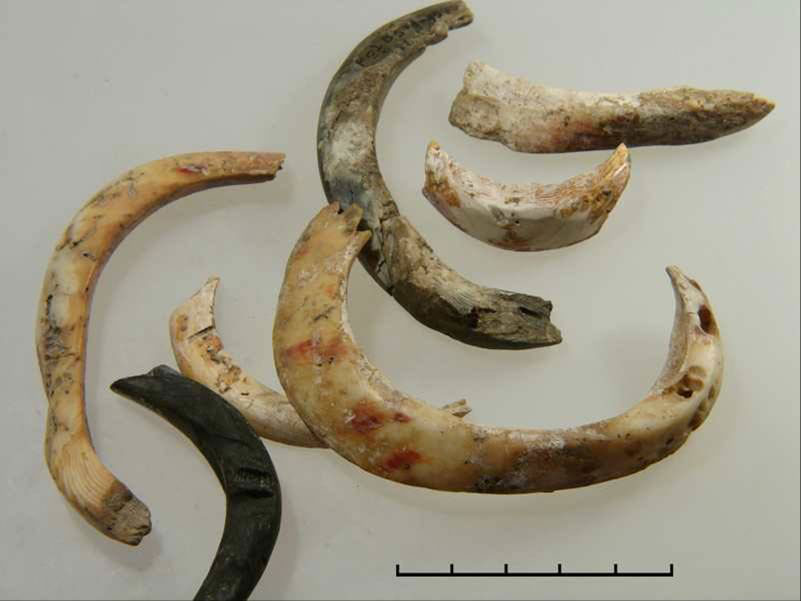 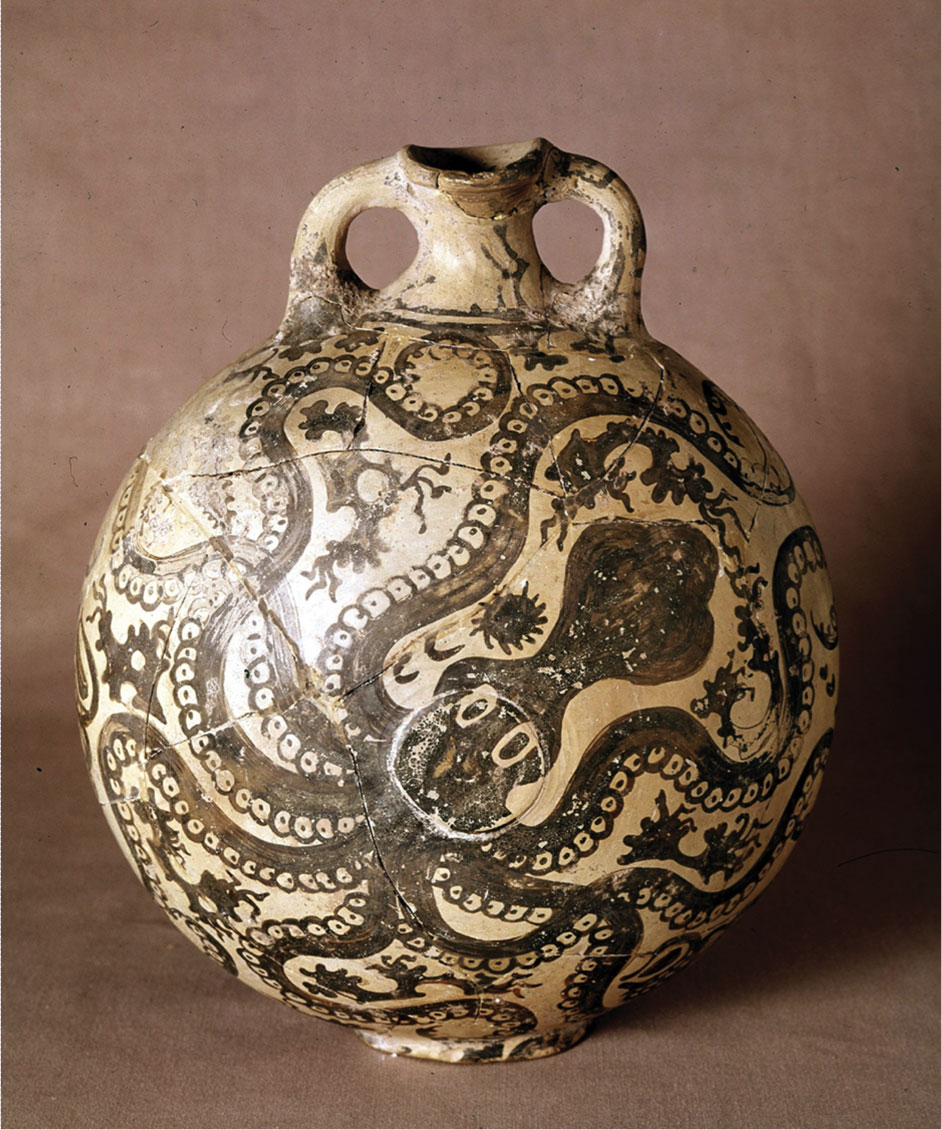 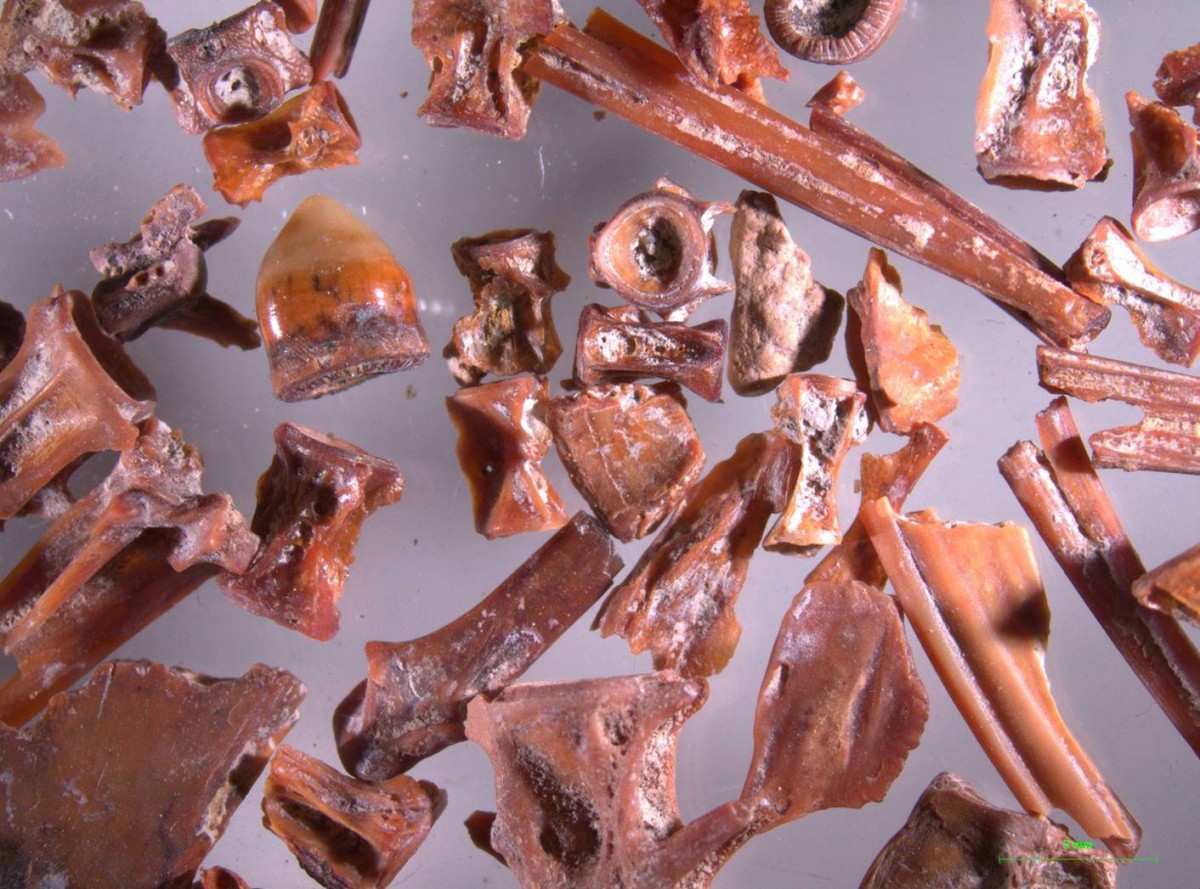 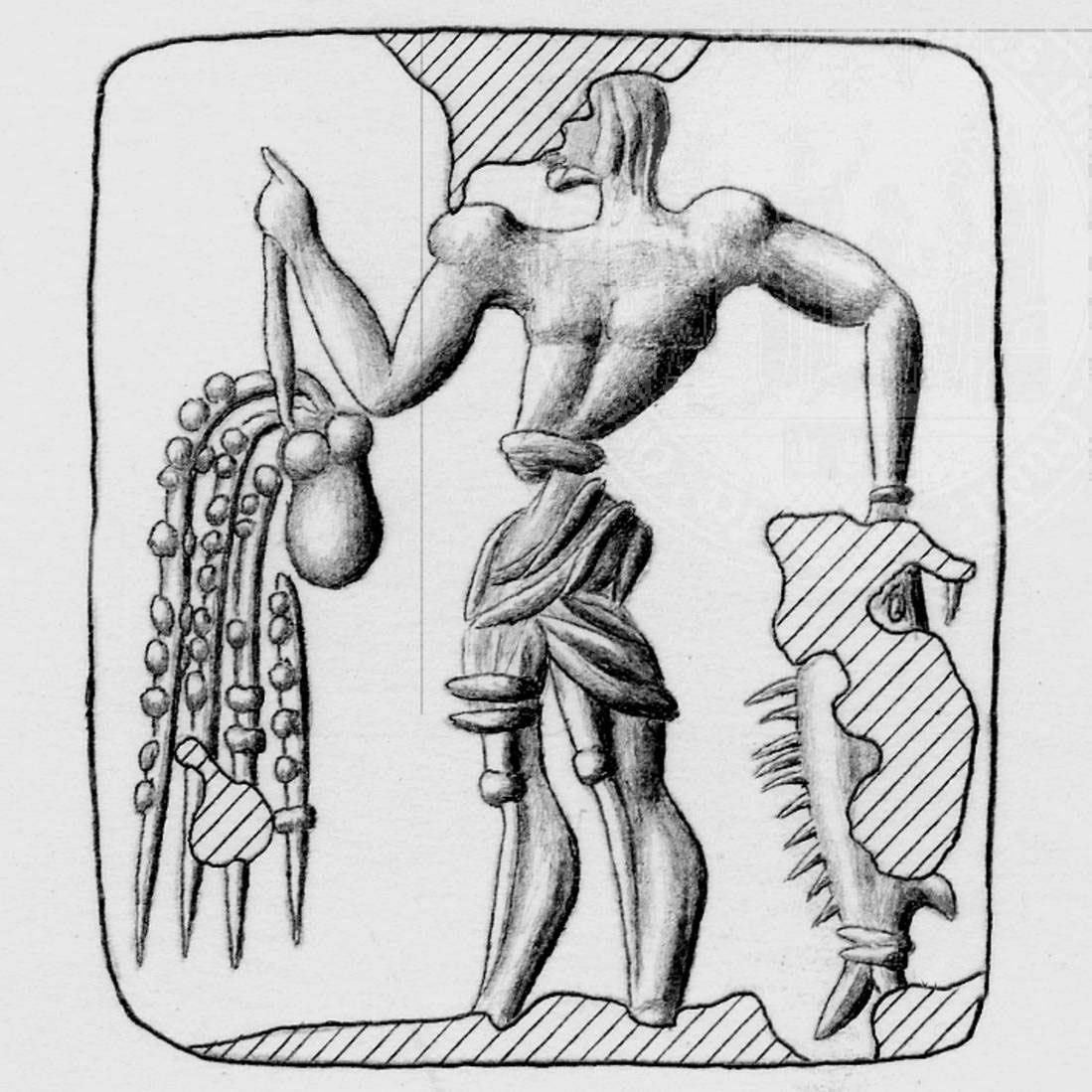 The coastal communities that lived around the Aegean exploited the riches of the sea from very early in their history. This relationship was expressed with a large variety of fishing ways and choices which reflect the character of the local ecosystems and the interests and priorities of the local communities. The roots of the fishing traditions of the Aegean, which are still found along its coasts, are to be found in prehistoric times, from the Mesolithic to the Bronze Age (note 1).

The exploration of prehistoric fishing in the Aegean is based on several lines of evidence. Fish bones, sea shells and remains of other marine organisms are regularly found in archaeological excavations and inform us on what people caught and gathered from the sea. The fishing tools, also found in excavations, as well as the illustrations in art inform us on the catches, on fishing techniques and on the people behind the act.  Natural sciences, including ichthyology, marine biology, oceanography and ecology add extra dimensions to the understanding of ancient fishing and shellfish gathering. Additionally, anthropology and ethnography provide analogies that help in our quest for the understanding of the inter-relations between humans and aquatic resources.

The picture that results from such an approach is fascinating and often, quite detailed. It provides a wealth of evidence which is potentially useful not only to archaeologists but also to ichthyologists and marine biologists. This picture, however, does not represent a snapshot of the ancient aquatic fauna but only that part of it that interests the ancient fishing communities, in other words, it is a picture of the fish and shellfish that were chosen by humans as food, as raw materials or as symbol.

Fish and fishermen in the Mesolithic

The oldest evidence for the systematic, complex and elaborate exploitation of the aquatic resources of the Aegean sea dates to the 11th millennium before present. That was the end of an era of extreme environmental changes and the beginning of the Holocene. This period is conventionally called the Mesolithic and some environmental issues that pertain to this period are important for the fishing activity at the time. It appears that the Black Sea opened to the Aegean and the rest of the Mediterranean just then. This event, in combination to an increased discharge of the large rivers of the Northern Aegean (due to higher precipitation at the end of the Ice Age) led to a marked increase of nutrients concentration in the waters. Culturally, the Aegean coasts were sparsely occupied by communities of hunter-gatherers and fishermen. There is unequivocal evidence that those people were technically able to cross considerable distances between the mainland and certain islands using boats.

Three archaeological sites provide rich data on the issue of fishing and shellfish gathering at this time: the Franchthi Cave in the Argolid, the Cave of Cyclope at Youra and the open air settlement of Maroulas on Kythnos. During their excavation there have been collected tens of thousands of fish bones and scales, sea shells and bones of sea mammals and sea birds.

The fish caught at these sites were mostly inshore (caught in shallow waters near the shore) and of medium size (ca 20-50cm). Groupers, scorpion fishes, John Dories, wrasses but also sea breams of various kinds were among the most common, although there is evidence for the capture of very large fish (>50cm) as well.  The excavation in the Cave of Cyclope also produced a number of fish hooks, made of bone and antler. Some of these had already attained the typical, and apparently very successful hooked shape that survived to the present day while the configuration of others, of a bi-pointed shape, has been forgotten in the Mediterranean but survives in other parts of the world. The excavation in the Cave of Cyclope at Youra also produced the remains of euryaline fish (fish that tolerate considerable fluctuations in water salinity), such as the gray mullets and migratory fish, mostly of the Scombridae family. Although they regularly captured large tunas (Thunnus sp.) with a special preference to the medium of small size fish, they mostly targeted the smaller species of the Scombridae family, such as the mackerels, the pelamids, the little tunnies etc.

In this period, the Mesolithic, we have the first evidence for fish preservation. In the osteological material from the Cave of Cyclope we observe that some fish such as the little tunnies (Euthynnus alletteratus) are systematically missing their head bones and their first vertebrae. This suggests that the heads had been cut before the fish were brought to the cave. Such a practice echoes the traditional process of fish preservation, which begins with the decapitation of fish and the removal of the viscera, to avoid quick spoiling of the fish. An interest to the storage of presumably preserved fish, is documented at the coastal settlement of Maroulas on Kythnos, where whole fish were stored in cavities in the floors of the rounded huts. As in Yioura, some of the heads and first vertebrae are missing altogether. The same phenomenon has been observed in other Mesolithic sites on Cyprus and Southern Italy, a fact that indicates the existence of a common Central and Eastern Mediterranean tradition in the preservation of fish.

When the fishermen became farmers and herders

The Mesolithic period was the “Golden Age” of fishing in the Aegean. The impression of abundance of aquatic resources and of a systematic fishing of large fish does not appear again in the following millennia. After the 7th millennium BC, during the so-called Neolithic period, agriculture and animal husbandry were adopted throughout the Hellenic Peninsula, as the basis means of subsistence. The exploitation of aquatic resources, marine, fluvial or lacustrine, was considerably reduced. The contribution of fish and seafood to the diet did not even come near that of ovicaprids, pigs and cattle.

Exceptions to this situation are special locations with rich aquatic ecosystems, where fishing and shellfish gathering remained important. Even technologies that had their roots in the Mesolithic, such as the bone fish hooks, were still in use. In the Neolithic settlement of Dispilio, for example, on the shores of Lake Kastoria, fishing and gathering of fresh water shellfish were particularly important. The same is true for another Neolithic settlement, at Kryoneri, near Amphipolis, on the banks of Strymon river, very near its eustuaries. The Neolithic fishermen there caught gray mullets and various fresh water fish such as carp, tench, great catfish and also eels. These eels from Strymon river became very famous a few millenia later in the markets of ancient Greece. Fishing was also intensive on various coastal locations, especially on islands, such as at Agios Petros on Sporades.

In this period, shellfish was collected not only for food but also for other uses. The thorny oysters (Spondylus gaederopus) for example were collected on the shores of Aegean, modified into bracelets and through a complex network of exchanges traded to far away places such as Central Europe.

Fishing in the age of Palaces

Research on the Bronze Age (3rd and 2nd millenia BP) provides a much more detailed picture of fishing. This era is characterized by the existence of organized cities, of centralized administration and bureaucracy, of extensive trade networks and the presence of a clear social hierarchy. In this era the sea and its creatures provided a wide range of decorative motifs (fish, tritons, argonauts, sea weeds, boats, etc.) all of which became very popular in art. The so called “marine style” pottery is an example of this trend. This popularity of marine motifs in art suggests the existence of a complex system of signification and ideas around the marine world.

In the Bronze Age, people all along the Aegean caught and ate mostly small inshore fish. In the Southern Aegean the picarels and bogues were the most common species, with small annular sea breams, combers, damsel fish, small pandoras and striped sea bream as well as groupers, scorpion fishes, leer fish, baracudas, sting rays and sharks are fairly common. In other words, fishing the Aegean was done in the shallow waters, very near the coasts. The seasonal, migratory fish, such as the tunas and the smaller members of the Scombridae family are much scarcer in the southern part of the Aegean than in the northern part. Fishing tools in this era, as these are known from their material remains and artistic representations appear to be adopted to this fishing zone. The fishing tool kit of the Bronze Age fishermen included bronze fish hooks of various sizes, shapes and configurations, small nets and also larger seine nets, baited baskets and stationery fish traps. Part of the catch were processed to make preserved fish products. The excavations at Akrotiri, Thera, provide ample evidence that the preservation of fish was an elaborate process that created a variety of different products.

The collection of shellfish for food follows a similar pattern, taking place in the shallows. Top shells, limpets and crabs were regularly eaten, occasionally in very large quantities. A clear differentiation is, however, evident. Fishermen turned to deeper waters to catch molluscs of a special use. Pen shellfish, purple shellfish and tritons are such examples. The pearly interior of the pen shells were cut and used as inlays, the triton shells, modified or not, were used as ordinary ladles or in special circumstances as ceremonial rhyta. The purple shellfish, from ca 1800 BC onwards, were used in large quantities for the production of purple dye on an industrial level. These special uses of shellfish incorporated the sea in spheres other than the nutritional. Shellfish, and by inference the sea itself were increasingly incorporated in the sphere of social competition and ideology.

Research on fishing in Prehistoric Aegean reveals a reality that is both familiar and exotic. The sea and its creatures, the fishing tools and methods, the processing and consumption of fish are very similar to what was known in Greece until a few decades ago. The prehistoric societies however that caught and consumed fish and seafood were different on many levels. The meaning of fish and seafood for these societies also differed.