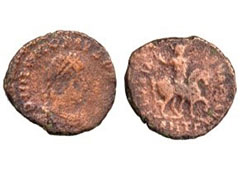 Caesarea Maritima as an Epicentre of the Late Roman ‘Nummus’ Economy

The Institute of Archaeology and Anglo-Israel Archaeological Society will jointly host a lecture by Sam Moorhead (British Museum) at the Institute on 27 June.

Titled ‘Ever Decreasing Circles – Caesarea Maritima as an Epicentre of the Late Roman ‘Nummus’ Economy’, Dr Moorhead’s lecture will bring his expertise on Late Roman and early Byzantine bronze coins, known as nummi, to show how Caesarea became a key nodal point in a Mediterranean-wide nummuseconomy that lasted for well over a century.

The lecture will be preceded by the AIAS Annual General Meeting at 5pm.

All welcome. Admission free without ticket