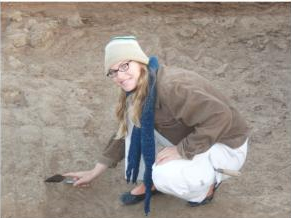 Clearly Valuable: What Glass at the Ancient Site of Karanis Reveals about Roman Egypt

Dr. Angela Susak Pitzer will address the topic “Clearly Valuable: What Glass at the Ancient Site of Karanis Reveals about Roman Egypt.”

Archaeologists study glass artifacts to understand technology, society, historic events, and notions of value in the ancient world. Today, the wide range of everyday glass objects we use still provides a window into who we are and how we live.

The innovation of blown glass, a hallmark of the Roman Empire, is exemplified in the objects dating from the Late Roman period (4th-6th centuries C.E.) at the site of Karanis. During an age when blown glass became a commodity, the use of glass reveals much about the ancient community of Karanis as well as the value and social functions of glass objects.

Dr. Angela Susak Pitzer, a graduate of the University of Oregon, earned her PhD in Near Eastern Languages and Cultures from University of California, Los Angeles (UCLA).  She worked six field seasons at Karanis for the URU Fayum Project directed by UCLA and the Rijksuniversiteit Groningen (The Netherlands) in partnership with the University of Auckland (New Zealand). She has also worked in Hawaii, California, Washington, Arizona, & Nevada.

Lecture sponsored by the Oregon Chapter of the American Research Center in Egypt in cooperation with the Middle East Studies Center of Portland State University.