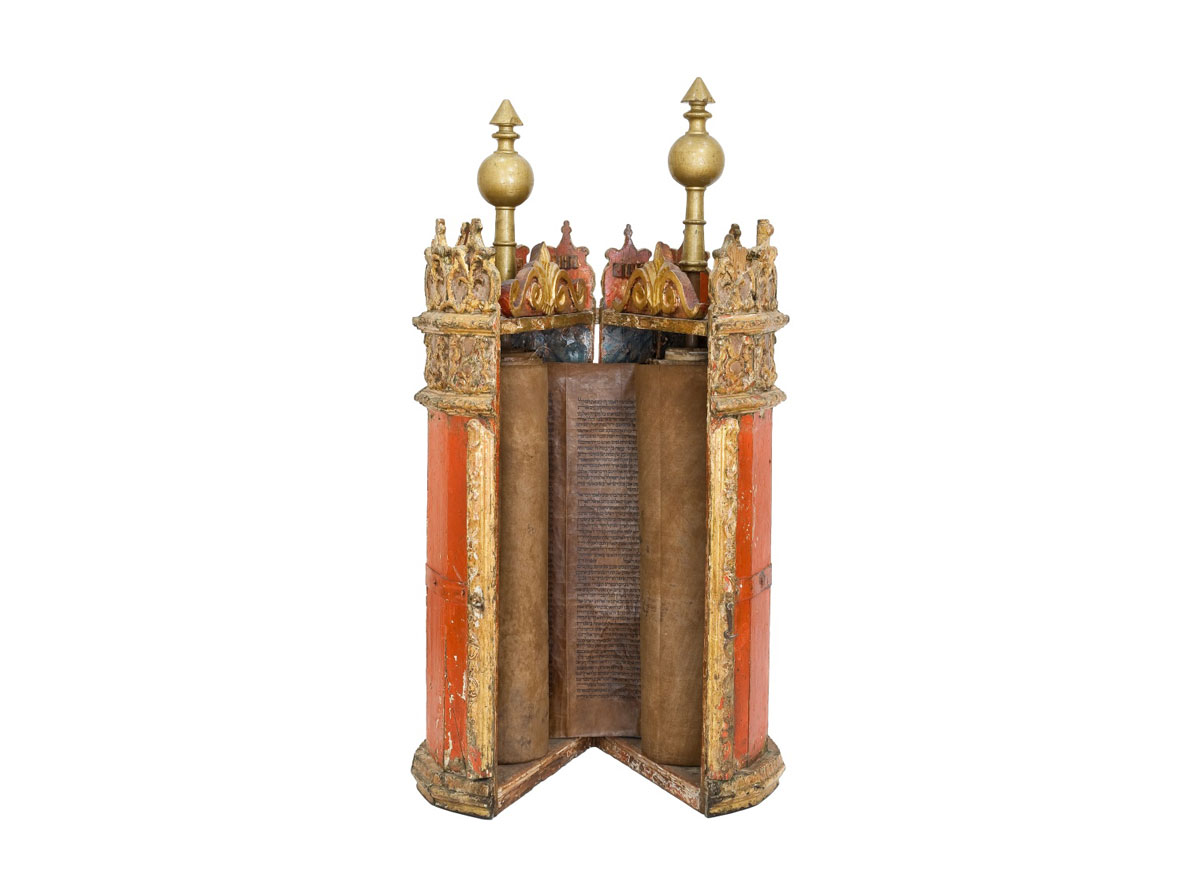 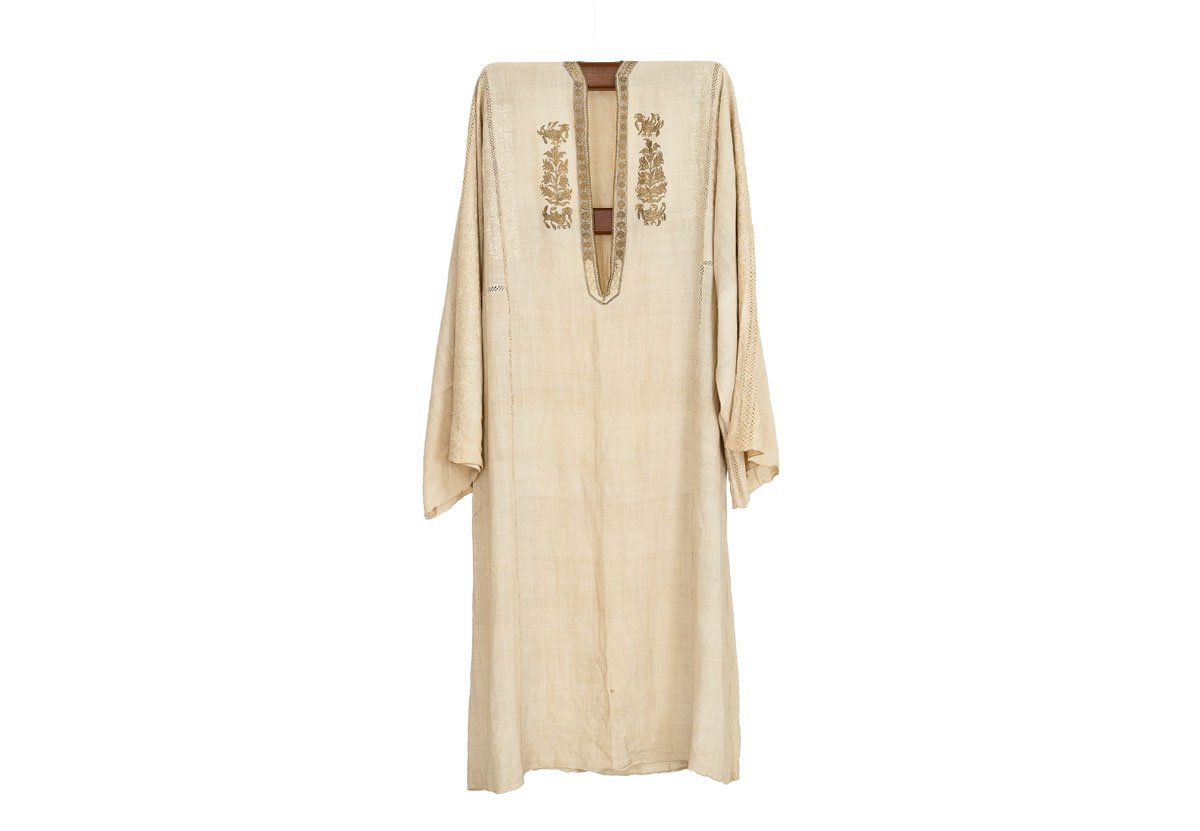 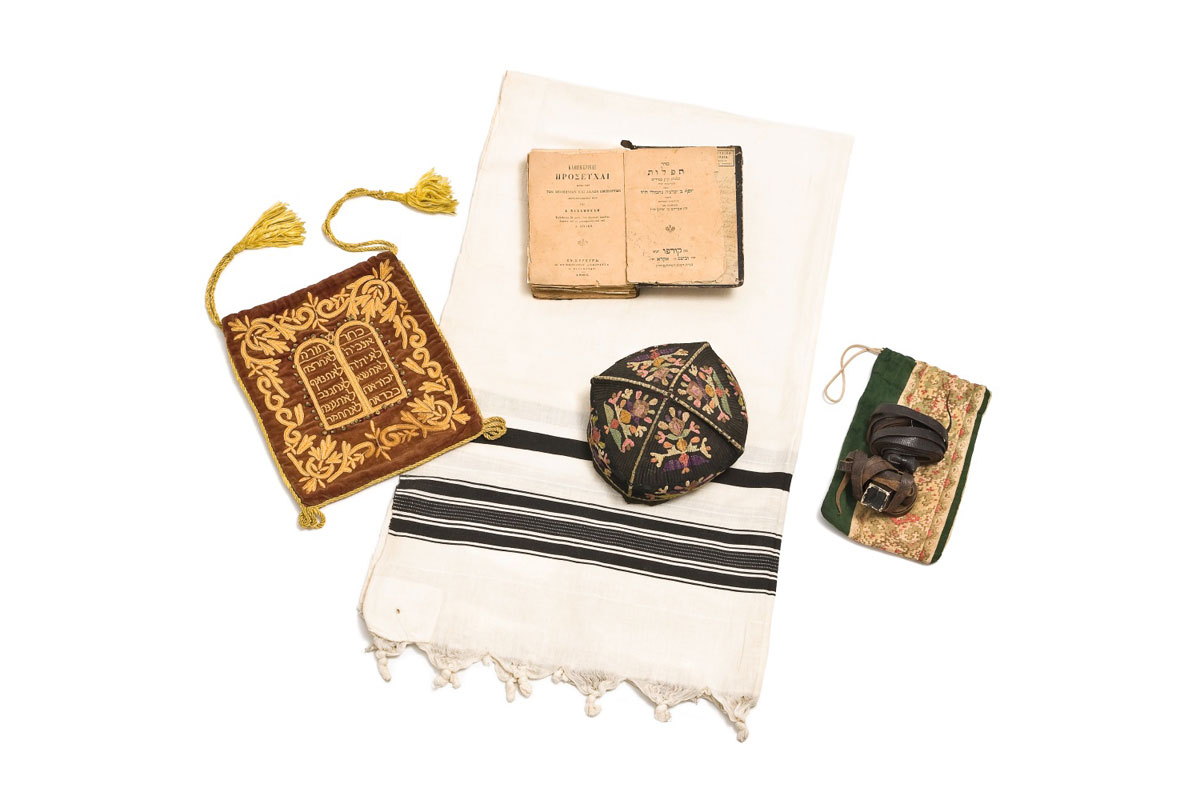 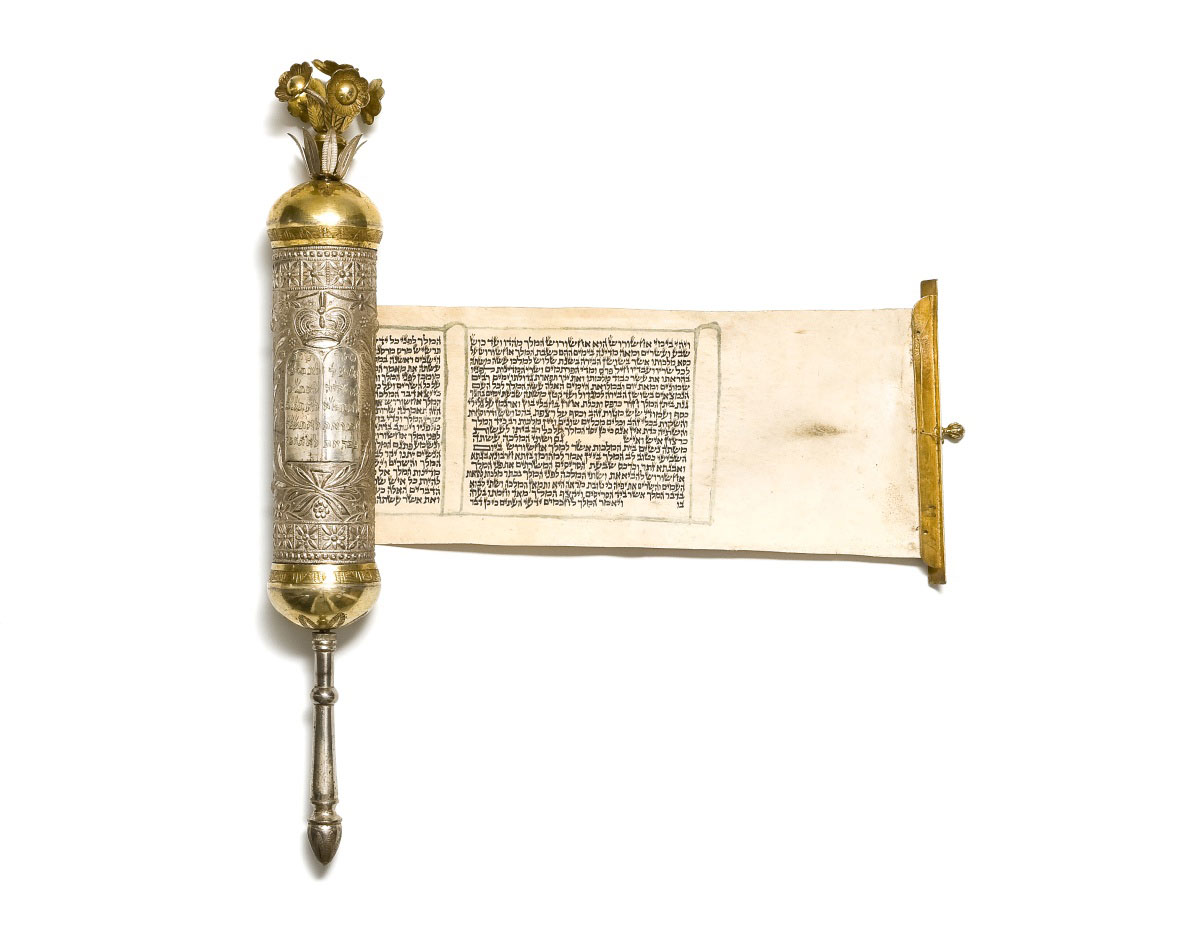 The Collections in the Jewish Museum of Greece

Representative examples of the permanent exhibition

The artifacts in the collection of the Jewish Museum of Greece are classified in the following five basic categories: Judaica, the Historical Collection, the Ethnological-Folklore Collection, the Second World War and Holocaust Collection and the Modern Art Collection. The extensive collection of religious Jewish artifacts, known as Judaica, includes objects used in synagogues as well as objects used in private worship. Holy utensils and fabrics from synagogues as well as the interior of the Patras Synagogue are displayed in the museum’s basement. On the same level, among other items to be found in the showcases is a collection of wooden protective cases, from various Jewish communities in Greece, used for the Sefer Torah (the Scroll of the Law).

According to the general practice of correct book storage in antiquity, the Sefer Torah was kept in an upright position inside a cylindrical wooden or knitted case, known as the tik in Hebrew from the Greek word “θήκη/thiki/ case”. Both the Romaniots (note 1) and the Jewish communities of North Africa, the Eastern Mediterranean and the Middle East, kept the tradition of storing each Scroll of the Law in a separate Tik.

The orange red Tik with the authentic Sefer Torah showing inside it, is a typical example of a Romaniot case for the Torah (fig. 1). It was given to the Museum in 1979 by the Jewish Community of Patras. Its gilt bas-relief decoration and the impressive crown on the perimeter of the cylinder’s top are typical elements of the tikim (the plural of tik) found in 19th c Corfu under Venetian rule. On the inside of the crown, one can distinguish metal sockets used for the tikims’ decoration with flowers or ears of corn during some of the festive services. The crowns of the Cylinder’s upright elements, called Rimonim (pomegranates) in Hebrew, are very ancient symbols of fertility and life. They are usually made of silver and more rarely of wood as in this pair of Tik.

The Torah includes the first five books of the Hebrew Bible. It is also known as the Pentateuch and is the most sacred Scripture of Judaism. In the synagogue it always has the look of a handwritten parchment that is wrapped round wooden uprights, forming the Sefer Torah. A synagogue’s Scrolls of the Law are kept in the Echal or Holy Ark, a type of cabinet which is often incorporated in an intricate structure built on the synagogue’s east wall. Extracts from the Torah are read in the synagogue on the Shabbat (Saturday), on holy festivals as well as every Monday and Thursday morning.

A variety of items used for ceremonies both in synagogues and domestically, during holy festivals, are displayed in the show case marked “Holidays”, on the Museum’s second level. They include a collection of the Scrolls of Esther (in Hebrew: Mengilot (plural) Esther, Mengilat (singular) Esther). This Scroll with the story of Esther is read during the Feast of Purim (the Feast of the Lots). It commemorates the Babylonian Jews’ salvation by Esther, their Queen, from the plot of the high court official Haman who, in the 5th c B.C., was aiming to wipe out all the Jews in the Persian Empire.

In Greece, it was the custom for the bride’s father to offer the Mengilat as a gift to the groom. Consequently, the quality of both the parchment and case of the Scroll reflected the social and economic standing of the bride’s parents.

The Mengilat (fig. 2), dating from the 19th century, with a silver and partly gilded case is a type of Scroll of Esther from Ioannina. There it is common among families of a high social class, known in Ioannina as “the first step”. The Tablets of the Law comprise the central motif of the embossed decoration. They are engraved with the original words in Hebrew of the Ten Commandments and are surrounded by the ancient motif of the laurel wreath, a symbol of victory. Some Scrolls of Esther also have written decoration with geometric and stylized floral motifs.

Groups of objects related to the circle of life are displayed on the last level of the J.M.G’s permanent exhibition. Among these is a group of traditional gifts for the Bar Mitzvah ceremony (“Son of Duty”), an important stage in the religious coming of age of boys upon entering their thirteenth year (fig. 3). For this ceremony, the boy receives his own pair of Tefilin (cube shaped leather cases) containing small parchments with extracts from the Torah which are attached by straps to the left hand and the forehead respectively. He also receives a Taleth, a woven prayer shawl, made of cotton or silk, edged with a blue or black stripes and small tassels, known as the Tsitsit, on the corners. Apart from these,a prayer cap known as a kipa is given to him to remind him of God’s ubiquity – in this case a multicoloured embroidered cap from Monastir (Bitola) – as well as a Sintour, a prayer book for daily prayers. This Sintour, the “Senter Tefilot” was published in Corfu in 1885 by the “Koraes” publishing house and contains jewish prayers according to the Sephardic convention (note 2). It also includes the first translation of this prayer book into Greek by the publisher himself, Joseph Solomon Nahamoulis who founded the first printing press of Jewish books in Corfu at the end of the 1870s.

The red brown velvet case for the Taleth is a typical example of the embroidery from Ioannina in the second quarter of the 20th century. It was made by Moses Matathia Isaac in 1938. In Ioannina, such velvet Taleth cases, decorated on the front with the motif of the Tablets of the Law, and with the date and name of the owner on the back, were usually a wedding gift given from the bride to the groom.

Apart from jewellery, embroidery and household utensils, the Ethnological-Folklore Collection of the J.M.G. includes Romaniot and Sephardic festive costumes and dress dating from the end of the18th to the beginning of the 20th century worn on important events in the cycle of life. A linen chemise from 19TH century Ioannina is on display in the show case on the sixth level of the permanent exhibition called “The Cycle of Life” and is a typical form of women’s underwear copying the dalmatic tunica (fig. 4). The garment’s neckband is decorated along its selvedge with a braid of diamond patterns in silver and gold plated wire. The symmetrical embroidery on the chest using the technique with wire (syrmakesiki) depicts flowers and birds which are common motifs in art from Epiros.

NOTES
1. Both the Jews of the Byzantine Empire and their descendants are called Romaniots. Until the 15th century they made up the majority of Jews in the Balkans and Greece in particular. They distinguished themselves from the rest of the Jews, both in regards to their oral language ,the so called Greco-Judaic, a Greek dialect with a mixture of Jewish and also in their customs that followed a special form.
2. Sephardim are the Jews originating from the Iberian peninsula who were scattered round the shores of the Mediterranean after their persecution in 1492 and during the 16th century. The Sephardim are different from the rest of the Jews owing both to their Spanish Judaic language (Landino) and to their special customs.