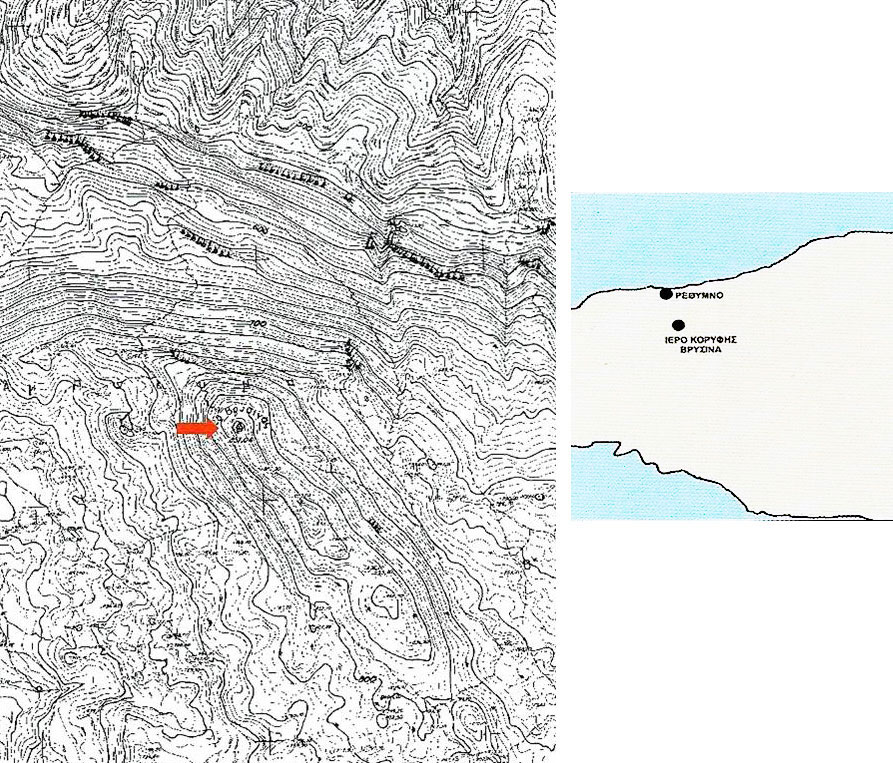 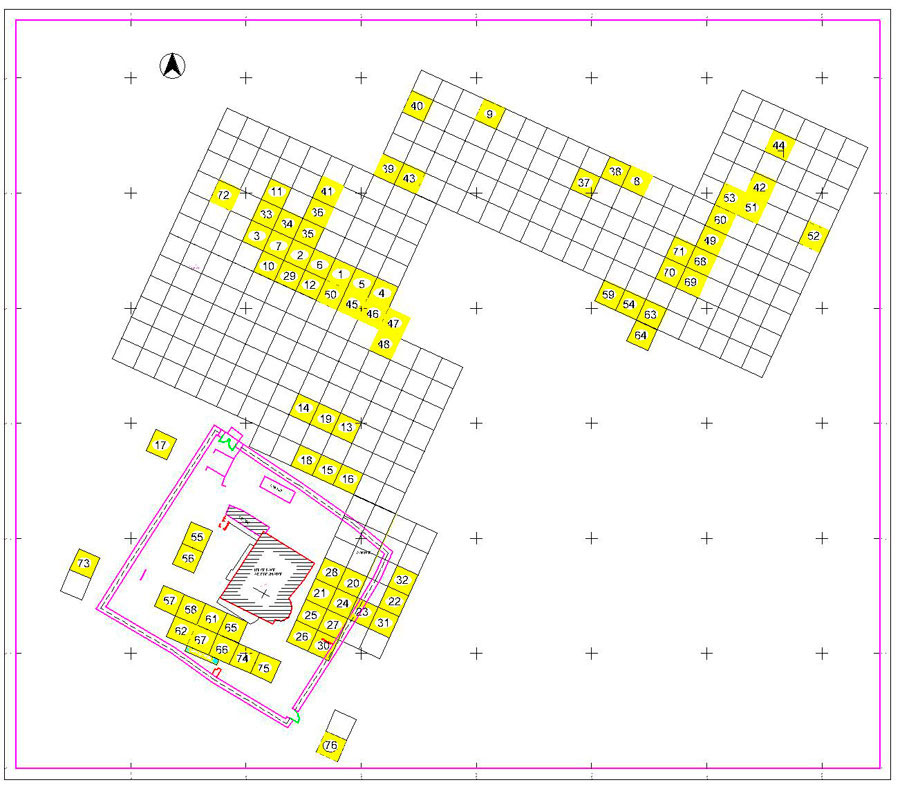 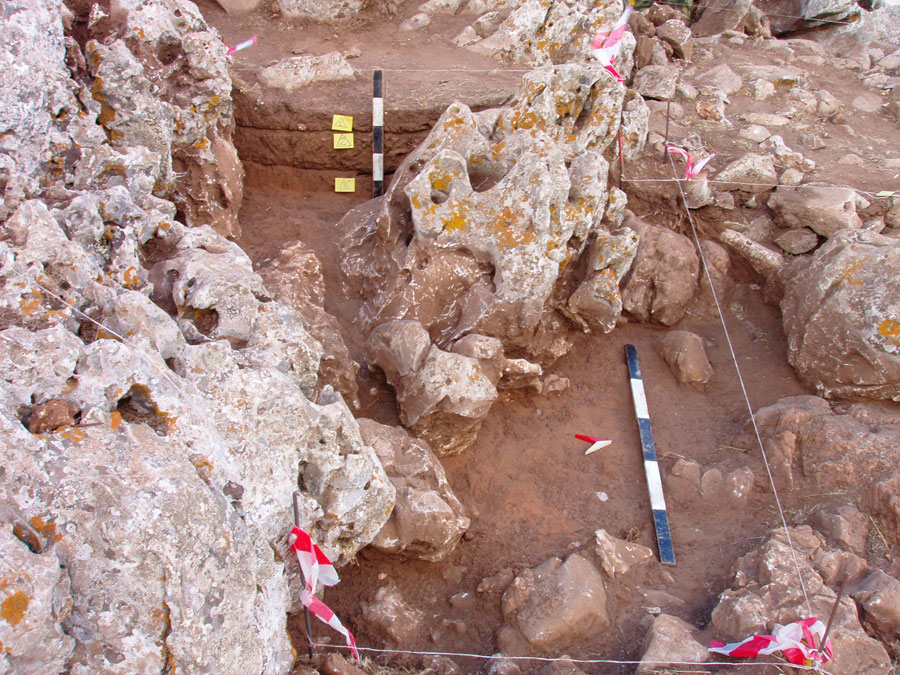 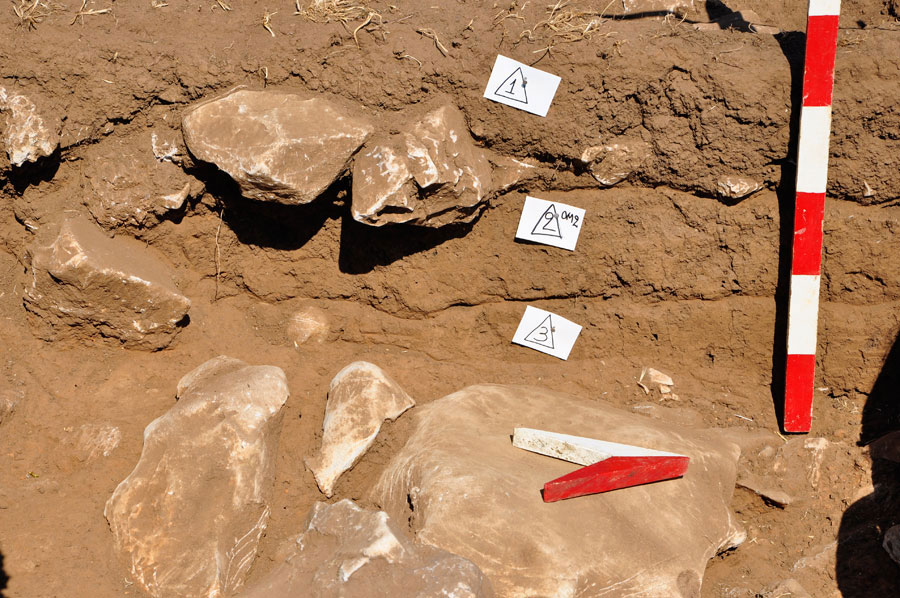 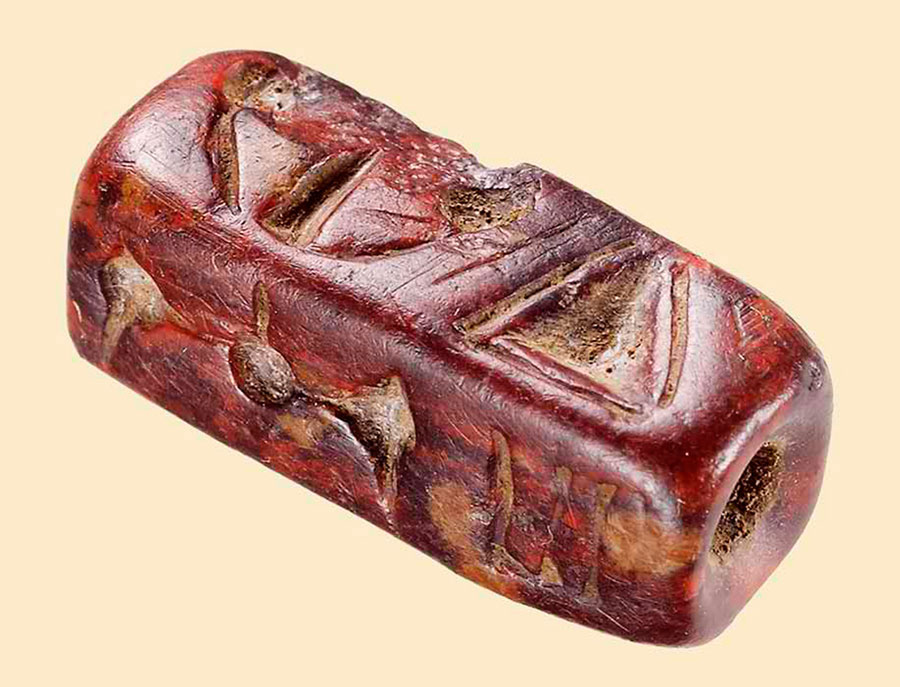 The systematic excavation at the Peak Sanctuary of Vrysinas

The excavation at the peak sanctuary of Vrysinas took place between 2004 and 2011 and was the result of the collaboration between two departments: the Department of History and Archaeology of the University of Crete, and the 25th Ephorate of Prehistoric and Classical Antiquities. The primary aim of this investigation was to find evidence, through the dig, of the ancient layout in the vicinity of Aghio Pneuma where the previous 1972/73 excavation had been carried out. Furthermore, the excavation sought to confirm the time span of the site’s use, as well as making an attempt to understand the ceremonial rites and establish the area where human activities took place (fig. 1).

The excavation focused both on the hilltop plateau and on the northern and north eastern sides of the slope. At this spot, the slope is smoother and is divided into three artificial terraces with retaining walls. The first is at the top of the hill where the small church stands, the second is slightly lower down and is long and quite narrow (measuring approximately 3 metres), while the third terrace is the largest and widest and offers itself to gatherings of many people. Remnants of human activity were found on all three terraces, while it is estimated that the total area of the sanctuary measures approximately 1,800 square metres.

Figure 2 shows the grid drawn up for the excavation, while the sections that were excavated are marked in yellow. There were very few mounds of earth (embankments), lying among the natural rock formations. Normally these mounds are no more than half a metre high. Archaeological finds lay inside the mounds of earth as well as in the rock fissures, and there is no indication that these are deposits. One of the significant achievements of the dig is that it threw light on the stratigraphy of the site. There were basically two layers contained in the sections of the central terrace on which the initial excavation attempts were focused. The first, disturbed surface layer was 10-15 centimetres thick with modern deposits, Minoan finds, finds belonging to different eras and many organic residues. The second layer contained sections where undisturbed small sites, clearly from the Middle Minoan period, had survived in places, while the third layer was natural red earth (terra rossa) where the finds came to an end. The main bulk of the finds, consisting of vases and figurines, comes from the middle layer. The undisturbed areas appear to be ancient, secondary embankments. Figures 3 and 4 show the stratigraphy and the elevation of the section.

The stratigraphy of most of the hill sections is roughly similar. The embankments were much larger on the lower terrace and the sections were disturbed. This was the point where the earlier dig had taken place. Rituals of the Neopalatial era are centred round this spot and the sections, although disturbed, produced finds of significant quality, such as bronze figures of pilgrims, miniature bronze axes and pieces of stone vases, including one from Egypt probably dating back to the Old Kingdom.

Right at the top of the hill, on the upper plateau, the area east, west and south of the church was explored, inside and outside the churchyard, in order to discover if there were any remnants which might be connected with the rituals of the Minoan sanctuary. There was extensive disturbance in all the sections, reaching the natural ground level. Remnants, together with sporadic Minoan finds, came mainly from when the church was being built. It seems, therefore, that a nucleus of Minoan worship did indeed exist here. There was also a great concentration of Late Byzantine vases found both inside and outside the churchyard.

Further significant evidence came to light regarding the core of the worship that took place at the peak, on the south and south western side of the churchyard. In spite of the fragmentary impression one has, due to later building activities, a cavity was found containing Middle Minoan ceramic material (pots and fragments of figurines) as well as an oval rock bearing clear signs of human intervention. Most of the rock has been smoothed and on its top one can discern that it has been hollowed out by humans, while deep grooves run down its northern and southern sides.

The pottery is distinguished by its poor quality, brittle clay and poor state of preservation. The greater part comes from the middle terrace where the Middle Minoan deposits are to be found. It is usually impossible to restore whole vases except for snake tubes. Fine/delicate pottery is to be found, as well as a broad variety of hemispherical cups with vertical or carinated sides. The sherds point to the existence of cooking utensils, pots and pans, arched-rim bowls, trenchers and quite a few with flat decoration. Several miniatures were also found. Regarding the pottery dating, most of the vases belong to two phases: MMII (cups, arched-rim bowls) and MMIII-LMIA (conical cups, wine-jugs, cooking utensils, pots and so on). The designs of the pots meet the requirements of the food and drink consumption which formed part of the ceremony taking place.

During the seven excavations, approximately 820 clay figurines were found. The animal figurines form the largest category of these finds. Bovids are the most common and are normally solid and handmade. Their dimensions vary, ranging from 10 to 30 cm long. Hollow figurines have also been discovered, together with figurines of two-headed bulls which constitute a rare type of offering for most peak sanctuaries in Crete.

Human figurines are usually no more than 10 to 15 centimetres high. To date, a greater number of female, compared to male, figurines have been found, in an outstanding variety of types with special emphasis laid on their elaborate hairstyles, hats and clothes.

An exceptional find of 2011 is a four-sided sealstone with carved signs of Minoan hieroglyphics on all four surfaces. It has been dated as probably belonging to the MMII period. The Vrysinas seal has filled in a great gap in the map of Crete regarding the distribution of hieroglyphic signs. To date, this is the only example we have from western Crete of the most ancient Minoan script (fig. 5). Most of the signs are perfectly recognizable. The seal was recently published in Kadmos. It therefore follows that, on one hand, the Vrysinas seal contains the established subject matter to be found, identical, all over Crete; and, on the other hand, it presents special innovations with new groups of hieroglyphic signs being recognized.

We have tried, as far as possible, to make our research comprehensive, so that the particular nature of the site might emerge more clearly. A surface survey took place at the same time as the dig. This aimed to ascertain the nature of immediate, geographical boundaries, ways of approaching the sanctuary, and the position it held in the network of Minoan communications, mainly to the south.

Geomorphological studies are also being carried out, together with ceramic analysis of the finds and zooarchaeological studies. The latter, apart from casting light on diet and fauna, could also illuminate aspects of devotional/ceremonial events, particularly the way in which animals were slaughtered and how this might reflect methods of sacrifice.

Professor Emeritus of Prehistoric Archaeology at the University of Crete