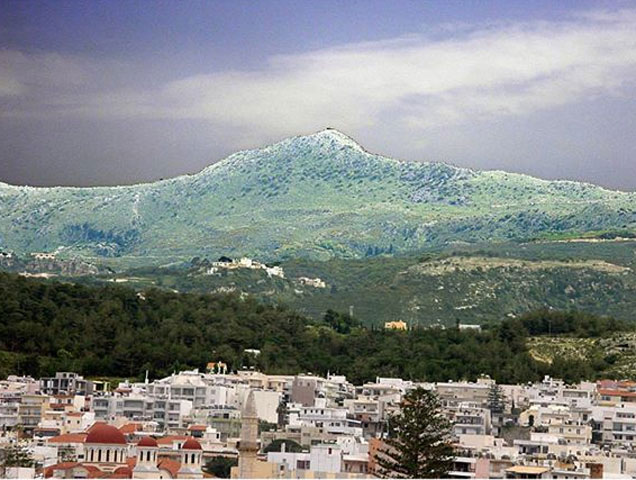 The Peak Sanctuary of Vrysinas. A form of early amphictyony?

“The Peak Sanctuary of Vrysinas. A form of early amphictyony?” is the subject of the next Minoan Seminar to be given by Iris Tzachili, Professor Emerita of Prehistoric Archaeology at the University of Crete, on Friday, January 15th, 2016, at 6.30 p.m.

“The peak sanctuary of Vrysinas, at the site of Ayio Pnevma (858 m. asl) commands the region with a view in two directions: the peak is largely visible from every direction and there is an uninterrupted view from on high to the surrounding countryside”, states Professor Tzachili.

“Human activity was uneven, sometimes intense, sometime slight. The earliest evidence belongs to the Final Neolithic followed by a break until the Middle Minoan period (c. 1800 BC), when the peak acquired the characteristics of a peak sanctuary, the importance of which reached a climax in the centuries that followed. Vrysinas’s main feature, as with other peak sanctuaries, is that, in a defined space and in specific periods, it produces an amazing quantity of particular finds, mainly figurines, that are indicative of a place for ceremonies, religious votives and in any case for lots of people to come together—a public place.

“The finds are characterised by their large variety, enormous quantities and high quality. There are exceptional finds (large statues, seals, stone vases) as well as simple and humble votive effigies of animals, humans and things from the natural world, that can be divided in two, the Protopalatial and the Neopalatial. There is a third period, the Postpalatial during LM IIIB and C, but less well represented. The periods have differences in the number of people visiting, a high density of human presence, or conversely a reduction, or even absence of it.

“During the study of various objects such as ceramic vessels, tools, plaques, stone tables, figurines of clay and metal, as well as models of various kinds, we have made an effort to deduce which human activities are indicated by the evidence: Ceremonial meals, symposia, meetings arranged between members of various clans and different ages are some of the activities that are connected to religious ritual as well as to broader aims that are concerned with the affirmation of ties or the management of matters of common interest or even the resolution of differences.

“The religious and simultaneous social activities that took place there can be better understood within the geographical context of the land and neighbouring villages which conducted them, and of which they were a part. That requires the understanding of the site, the physical geography, the resources, the changes to the topography as well as the settlement patterns in the wider area. In practice, that means we must detect the routes, paths, water sources, toponyms, human visibility, the movement of animal herds, the direction of streams. In short, we must detect the natural and human actions that have been carved like a palimpsest on the landscape. A related topic is the geographical provenance of the visitors to the Sanctuary which can be deduced by analysing the clay of the pottery”.

There will be two main subjects in the seminar: “The first is the vast wealth of the depiction of the human form in three dimensions. Female and male figures in every detail are depicted in varieties and poses, with luxurious clothing, cod-pieces, hair-styles, head-dresses. Never before had the human figure been depicted in three dimensions in such a variety of ways and in such great numbers. The second is the fact that Peak Sanctuaries, namely the ceremonial meeting of large numbers of people at a high point, are bound up with phenomena of great importance for the history of the island in the Bronze Age: the creation of towns, the phenomenon of administration, the interpretation of the palatial centres, the transfer of the main emphasis from the agro-pastoral communities to the cities. It was a where clans and extended families met at regular intervals for religious and social reasons. If this is correct, their functions are analogous with those of the amphictyonies of the Classical period”.

The seminar will be given in Greek with bilingual discussion, in the building of the Archaeological Society (22 Panepistimiou str., Athens).