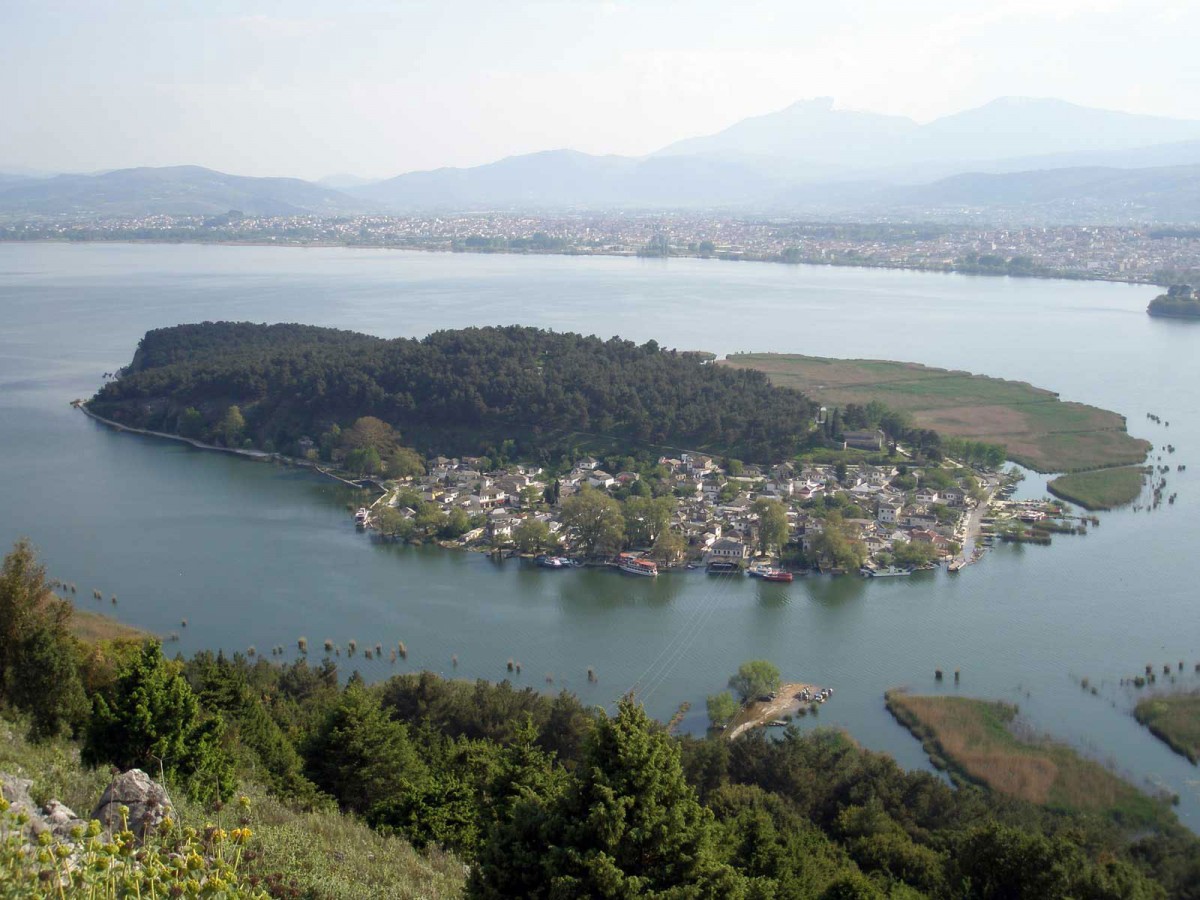 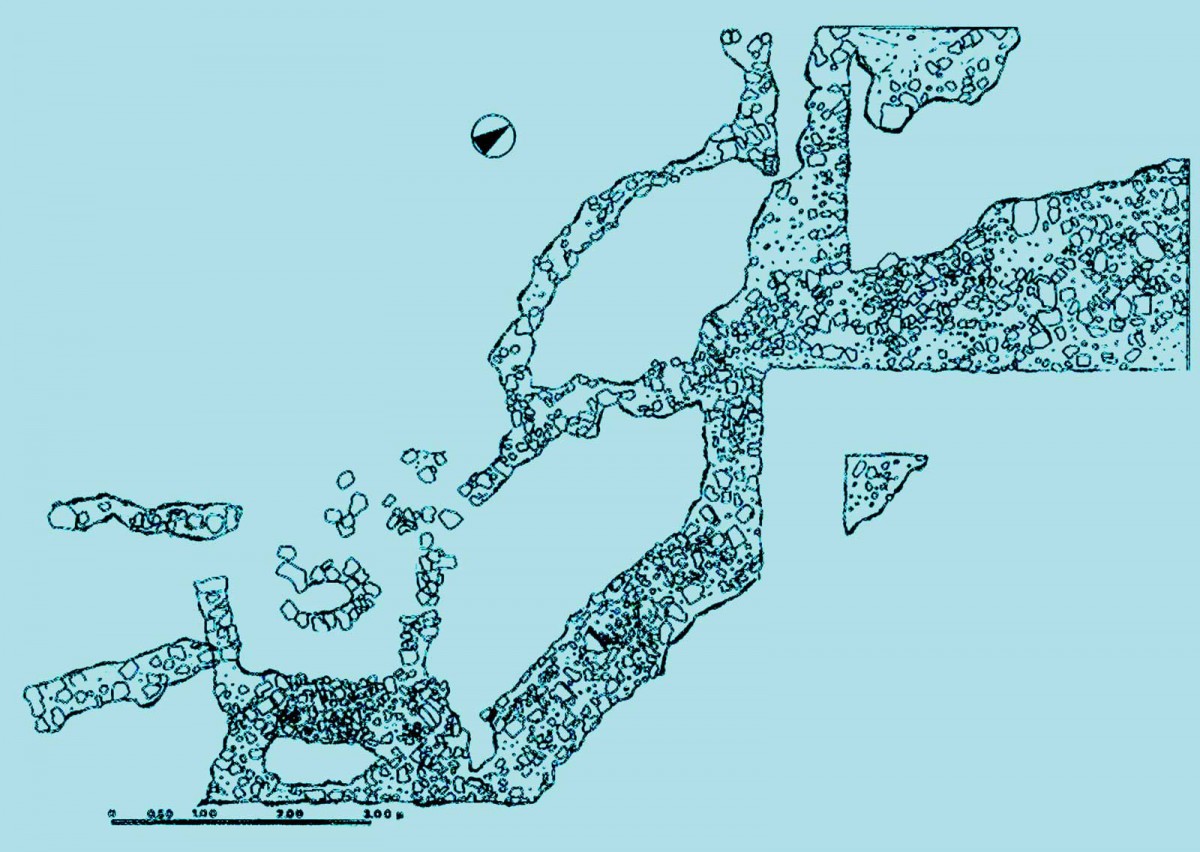 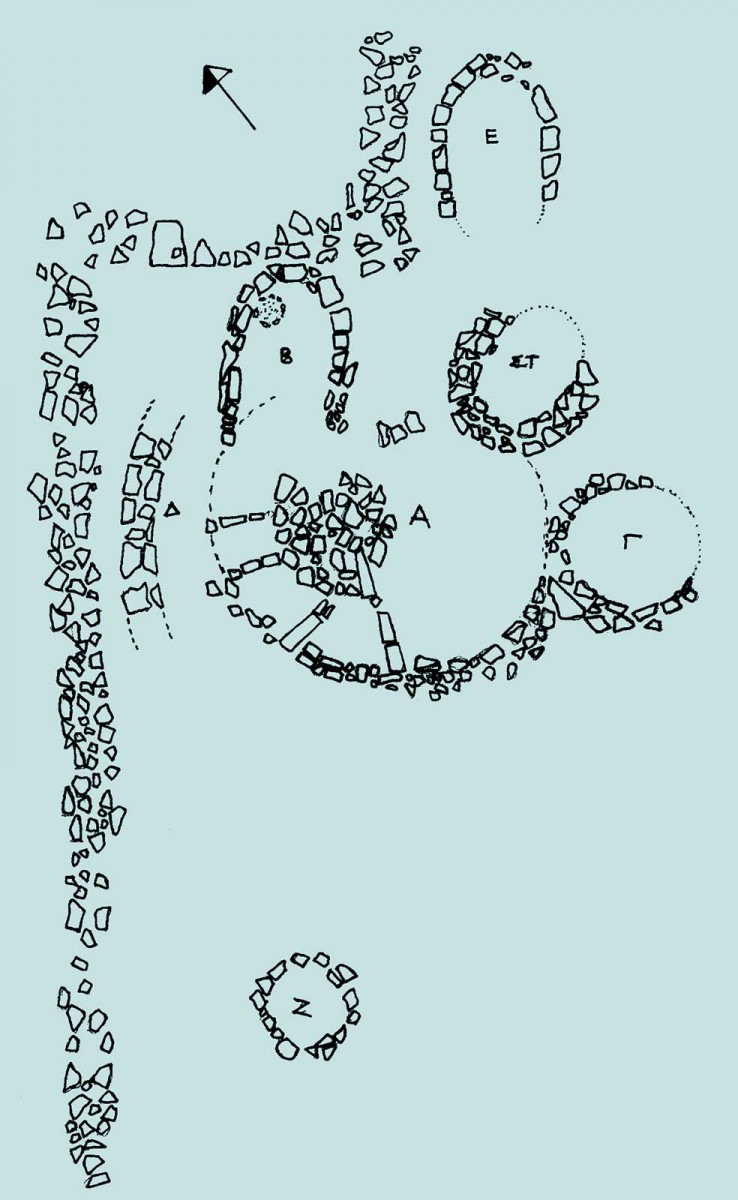 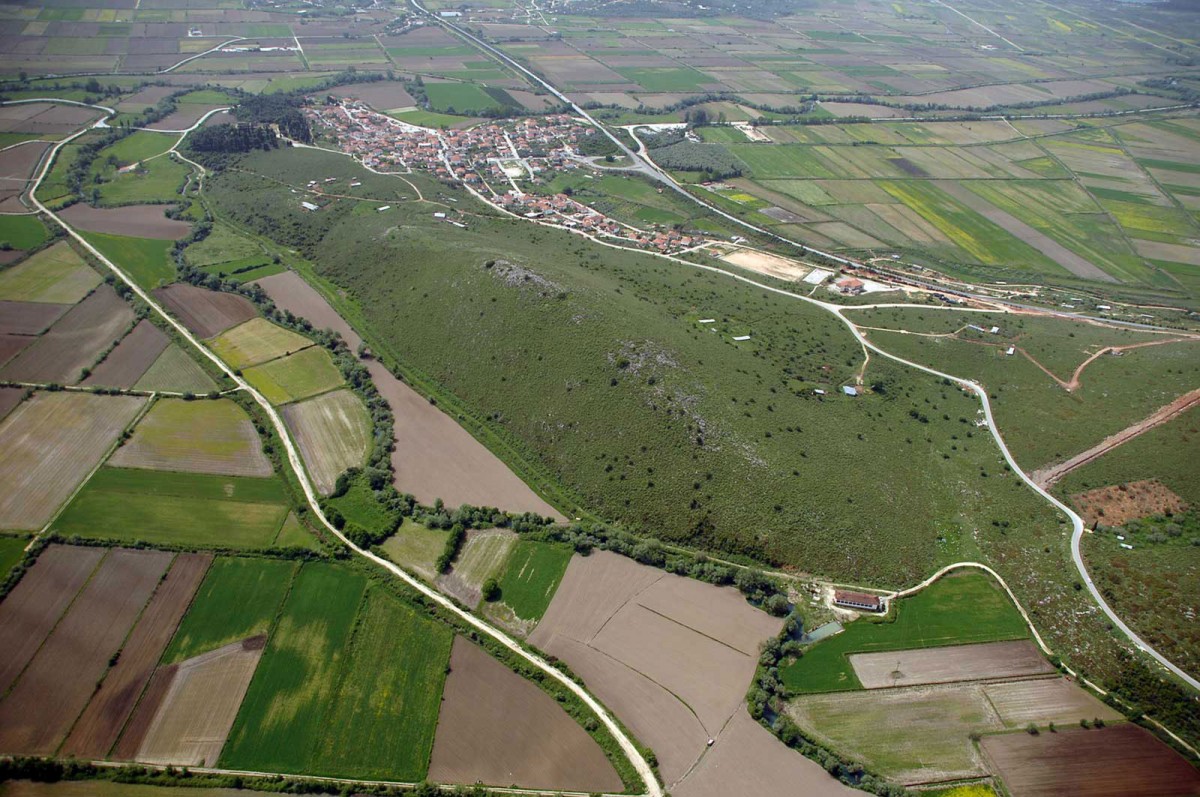 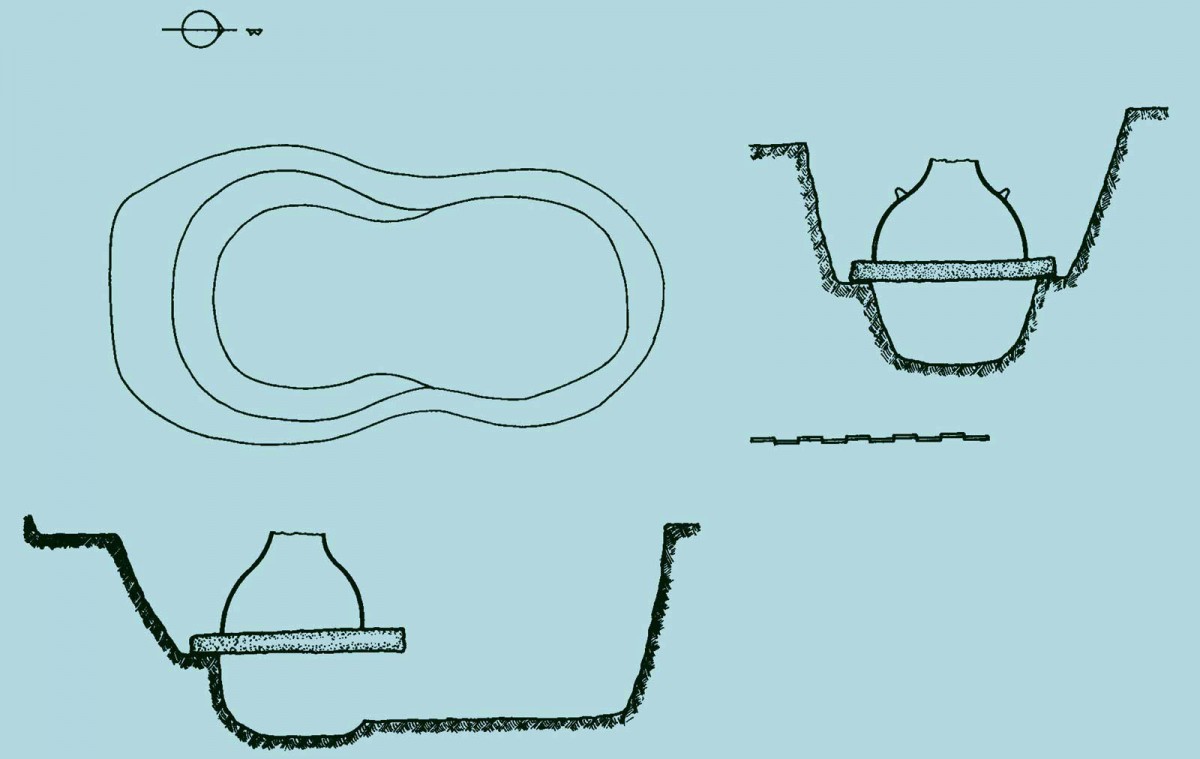 The Bronze Age in Epirus (Part 2)

The early stages of the Late Bronze Age in Epirus are synchronised to Late Helladic I and II periods of southern Greece, which, however, barely affected the region under discussion here. The culture we are dealing with, here in this article, belonged to the third stage of the Late Bronze Age, namely to the period of transition that occurred during the 13th and 12th centuries BC, that is the Late Helladic IIIB2-C1 period of the Mycenaean world. Although the few imported products and customs (Mycenaean pottery, bronze objects, tholos tomb) from the south are of great assistance in determining relative dates, the material culture of Epirus was still mainly distinguished by the locally mass-produced handmade pottery that was chiefly used in the region. Frequent use of the term Late Bronze Age-Early Iron Age to define the period under research, probably indicates that here there is a relatively smoother transition from one period to the other than in other parts of Greece. For the above reasons, we consider that Epirus lay on the outskirts of the Mycenaean world, importing from the Mycenaean “markets” desirable “prestige” objects, which could not be manufactured locally. Aside from all this, safe data about the period are relatively few (note 1) and any generalization could lead to mistaken conclusions.

On Liatovouni hill (note 2) that overlooks Konitsa valley and at the merging point of the rivers Aoos and Voidomatis, part of a settlement (fig. 1) was uncovered, which was inhabited from the 12th down to the 4th century BC. The settlement is marked by a slightly curved retaining wall, about one metre thick, on the interior of which at least two habitation layers were detected. The building material used for the construction of curved and linear walls is undressed local stone for the foundation, while the upper part is made of mud brick, reinforced with wooden frame. The floors of the earlier habitation layer are earthen and sealed with pebbles, while a drainage channel is carved on the rock. The floors of the second phase are smoother, although made of the same materials. Under one such floor an infant’s disturbed pit burial was uncovered with a two-handled cup. A sloping earthen surface with gravel and pebbles was interposed, which was assumed to have been the settlement road. A quantity of coarse handmade pottery and a few matt-painted sherds were found, together with at least ten stems of Mycenaean kylikes dating to the Late Helladic ΙIIC period, clay spindle whorls and loom weights, various bronze and iron objects. The settlement’s cemetery is located a short distance away.

In the valley of the river Gormos at Pogoni of Epirus settlements and burial mounds (note 3), dating from the end of the Late Bronze Age and mainly from the Early Iron Age, have been explored. At sites in Meropi, Palaiopyrgos and Kato Meropi parts of settlements have been uncovered, revealing groups of circular buildings (fig. 2), standing over small plateaus on smooth hillsides. The boundaries of these particular settlements are frequently set by retaining or by fortification walls, as one finds at Liatovouni in Konitsa and later on at Vitsa in Zagori and at Aetos in Filiates (recent finds of the 32nd Ephorate of Prehistoric and Classical Antiquities). The most common house groundplans are circular or ellipsoid, while less frequent are the “shoe-shaped” and the apsidal. The foundations of the houses’ walls are built of stone, while the upper parts are constructed with lightweight and perishable material. Inside these buildings local handmade pottery, clay spindle whorls, flint artifacts and other small objects were found. In the interior of an apsidal house at Kato Meropi a hearth and two storage pithoi were found. In the bottom of one of the pithoi a mass of amber was found, weighing approximately 1.500 grams. The context of these finds cannot unfortunately be placed within an exact chronological frame.

At the foot of mount Mitsikeli and on the banks of lake Pamvotis (fig. 3), the settlement of Krya next to Ioannina (note 4) evolved, being constantly inhabited from the 12th century down to the 8th century BC. What remains of two habitation phases are piles of stones and remains of hearths. Handmade pottery, imported samples and local imitations of Mycenaean kylikes, clay spindle whorls, flint artifacts, animal bones and a bronze pin were found.

From Thesprotiko in Preveza remnants of building material, handmade pottery, stone tools, cist graves and stone-covered tumuli are reported. These particular finds date from the prehistoric and protohistoric period. Five circular huts stand on stone retaining platforms, at the lower end of which they were built on. The upper part of the huts is built of perishable materials and these constructions have been already categorized as belonging to the same early period (note 5). Archaeological sites belonging to the Late Bronze Age have been located within the area, being investigated by the Nikopolis Project (this area lies between the rivers Acheron and Louros, which are the borders of ancient Kassopaia). The large number of flint artifacts at Koumasaki and Poundas, in conjunction with handmade pottery, demonstrates local production. Furthermore, the existence of settlements at the sites of Vouvopotamos, Skafidaki and Galatas (note 6) is proven by surface finds of handmade pottery and stone tools, sherds of Mycenaean pottery, remnants of building material and other finds. Three absolute radiocarbon dates reinforce the relative chronology of the above sites.

Differences are presented in those settlements to be found in the basin formed at the mouth of the river Acheron, which flows into the gulf of Fanari on the Ionian sea. Other conditions, such as easier access via sea routes, the fact that certain sites stood on established commercial roads, the imitation or enforcement of Mycenaean prototypes and the need for protection from piratical raids led to the construction of “cyclopean” walls. Such monumental fortifications were only adopted in limited cases and are to be found exclusively on the southwestern coast of Epirus. Well-known examples (note 7) are mentioned as existing at Ephyra, at Aghia Eleni, at Kastriza and a little further away at Kiperi in Parga, where the only known Mycenaean tholos tomb in Epirus was found.

Most characteristic is the citadel of Ephyra (note 8), which stands (fig. 4) on Xylokastro hill (83 m a.s.l.) at the merging point of rivers Acheron and Kokytos, next to the village of Mesopotamos in Preveza, where also the famous Oracle of the Dead by Acheron lies. During the Late Bronze Age the citadel stood only 500 m away from the sea, while today the coastline has shifted towards the Ionian sea and the ancient port (Glykys Limin, note 9) has been covered by the ample banks of the river Acheron. Back then, a fortification “cyclopean” wall was built, 1.120 m long, enclosing an area of about four acres. On the southern side there was a 2,30 m wide gate, reinforced by two vertical supports and a strong tower-bastion. The prehistoric fortress included a second inner perivolos, while a third one on a higher level probably dates from Hellenistic times. Inside the citadel three burial tumuli belonging to the end of the Late Bronze Age were discovered, containing Mycenaean pottery among other grave gifts. Large quantities of handmade pottery and flint artifacts were found in the area, but no trace of other prehistoric constructions or of prehistoric strata. The site could have served as a trading colonial port for a regional centre of the Mycenaean world, probably locating to what today is the administrative district of Aitoloakarnania, where important Mycenaean settlements (note 10) have been excavated.

At a short distance from the tholos tomb of Kiperi in Parga a fortification wall is located, measuring 1,30 m wide, enclosing within it foundations of circular and rectangular buildings, where also prehistoric pottery and stone tools were found. On the Aghia Eleni hill two retaining or fortification walls run parallel to one another, each measuring approximately 2 m wide. On Kastriza hillock sections of a fortification wall are to be found, measuring 3 m wide. These, together with a gate and other ramparts, defended the exposed parts of the hill. Surface finds of handmade pottery, stone artifacts and other prehistoric material are mentioned to have been found here.

Ancient Dodona lies on the northeastern side of mount Olytsika-Tomaros (fig. 5), into the heart of inland Epirus, near the basin of Ioannina. The Oracle of Dodona was held to be a sacred place by all Greeks. This is mentioned already from the 8th century BC in Homer’s Iliad and Odyssey. At the same time, bronze and other votive offerings from all over the Mediterranean world enter the archaeological record. A collective Greek memory reverberates in the lines of various ancient authors, of how the Great Goddess/Mother Earth symbolising fertility used to be worshipped here. In Epirus and Dodona Mother Earth went by the name Dione and was worshipped together with Zeus. The cult of the sacred oak (dryolatreia) goes far back in prehistory, indicating a similar Indo-European origin. The question is what went on here in prehistoric times (note 11)?

Other than a few bronze knives dating to the Middle Bronze Age, the rest of the prehistoric finds from Dodona belong to various phases of the Late Bronze Age. In 1967 during excavations in the Hellenistic stoa of the Bouleuterion, a prehistoric layer was uncovered, 0,50 cm thick (note 12), which also extends to other parts of the archaeological site. Here, the foundations of five postholes supporting a rectangular hut were found, also eight pits containing handmade pottery and flint artifacts, as well as a thermal construction of an eight-shaped kiln (fig. 6) for baking food and pottery. In conjunction with these constructions, all types of local handmade pottery (some matt-painted) were found, as well as imported wheelmade pottery dating from the Late Helladic III period (about two hundred sherds) and local imitations of Mycenaean pottery (mainly kylikes).

There are around thirty prehistoric bronze objects coming from older excavations at Dodona. These are small one-edged or double-edged knives, double axes, leaf-shaped spearheads, daggers with T-shaped hilts and a similar sword. Around thirty more bronze trunnion axes were found, dating to the transitional period. Most of these axes are elaborate, made of sheet-hammered metal and obviously seem like votive offerings. The concentration of the above features in the valley of Dodona is unique to Epirus. The coexistence of certain types of pottery, in conjunction with postholes for huts and other constructions, is made even more interesting in association with the group of miniature handmade vases and the groups of bronze tools and weapons that seem to have served as votive offerings (fig. 7). If not, what possible other reason could there be for the accumulation over the years of such a quantity of bronze artifacts with various provenances (note 13) at this remote but sacred part of inland Epirus?