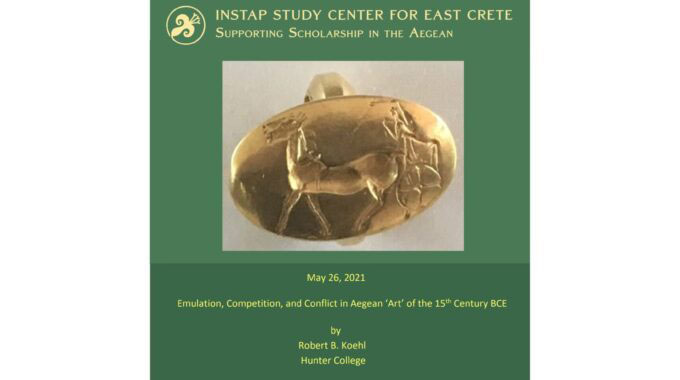 Emulation, Competition, and Conflict in Aegean ‘Art’ of the 15th c. BCE

The INSTAP Study Center for East Crete invites to a zoom lecture entitled “Emulation, Competition, and Conflict in Aegean ‘Art’ of the 15th Century BCE” by Robert B. Koehl (Hunter College).

The excavation at Pylos of the Tomb of the Griffin Warrior in 2015 provided welcome new material from the 15th century BCE Aegean which has continued to stimulate lively discussion in print and anecdotally among Aegean archaeologists. Furthermore, the rapid and meticulous publications by the excavators, Sharon Stocker and Jack Davis, of the agate “Combat” seal and of the four gold signets found in the same tomb have enabled their detailed study and have acted as the catalyst for my own exploration of the era.

The first part of this talk considers how Ellen Davis on the “Vapheio Cups,” (E.N. Davis, “The Vapheio Cups: One Minoan and One Mycenaean?,” The Art Bulletin 56 [1974], pp. 472-487), and Jeffrey Hurwit on the ”Dendra Octopus cup,” (J. Hurwit, “The Dendra Octopus Cup and the Problem of Style in the Fifteenth Century Aegean,” AJA 83 [1979], pp. 413-426), contributed to our understanding of 15th century gold-working techniques and decoration. Their conclusions, however, are questioned, particularly as regards the “object biographies” ascribed to these works. Rather, the “authorship” of these works is discussed as expressions of artistic emulation. Furthermore, specific artifacts are identified here as examples of “reverse emulation,” whereby an artistic idea that began in the Minoan world, was adopted by Mycenaean artisans, and then returned to Crete, in its “Mycenaeanized” form.

The second part of the talk will focus on specific artistic and iconographic issues raised by the agate “Combat” seal and the signet rings from Pylos. The gold signets will be seen as Mycenaean products, two of which will be attributed to the same “hand,” and a specifically Mycenaean iconographic trope will be identified. Furthermore, Minoan sealings from Zakros and Ayia Triada which have previously been cited as representations of military conflicts and possible parallels for the image on the agate seal stone, are re-interpreted here as depictions of “stick-fighting,” a hitherto unidentified Minoan sport, joining boxing, bull-leaping, running, acrobatics, and possibly chariot racing.

The last part of the talk will focus on a remark made by Hurwit, regarding the recognition of formulae as a means of distinguishing between 15th century BCE Minoan and Mycenaean art. Thus, the image of the victor on the agate seal from Pylos will be explained as one of a series of intaglios, albeit the most beautiful, that depict the formula for the Mycenaean killing pose, called here the “lunge and thrust.”