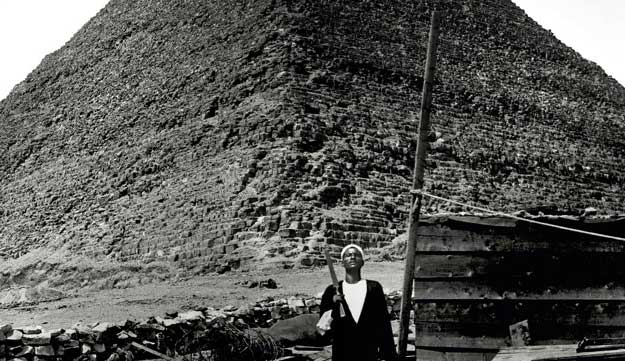 In the Shadow of the Pyramids

The Great Pyramids of Khufu, Khafra and Mycerinos and the extensive cemeteries on the Giza plateau are among the best-researched necropolises from the Old Kingdom (c. 2650-2190 B.C.).

In January 1912 an Austrian expedition began to excavate the Old Kingdom mastabas located west of the Great Pyramid. These successful campaigns continued until 1929 (interrupted only by WWI) and uncovered a wealth of artworks, cultural evidence and information on tomb building and the Ancient Egyptians’ conception of the afterlife, many of which still form the basis of subsequent studies of this period. Most of the finds have remained in Egypt, but numerous statues, reliefs, sarcophagi and other funerary objects came to Vienna following the find divisions.

The exhibition “In the Shadow of the Pyramids. The Austrian Excavations at Giza (1912-1929)” hopes to demonstrate both the importance of the Kunsthistorisches Museum’s holdings of objects from the Age of the Pyramids and Austria’s contribution to excavating and researching this important period. With the help of seminal loans from major European and American collections and museums the exhibition offers informative insights into the seminal achievements of the Ancient Egyptian civilization during its first golden period.

The exhibition also includes multi-media installations designed and set up in collaboration with the Institute of Architectural Sciences/Digital Architecture and Planning of the Vienna University of Technology, headed by Assistant Professor Dipl. Ing. Dr. Peter Ferschin and Dr. Iman Kulitz. Using digital media, visitors to the exhibition can take a virtual journey back in time to visit the Giza plateau during the reign of the pharaohs of the Old Kingdom; and our virtually-accessible 3-D reconstructions enable you to explore in an interactive way a tomb’s architecture, decoration and furnishings. Some of the artworks on show will be incorporated into the digital model of the tomb and can thus be explained and visualized in their original setting. Another interactive station takes visitors back to the years 1912-29 when Austrian Egyptologists and scholars discovered these tombs and the artworks they contained. Excerpts from the diaries of the leader of the expedition, Hermann Junker, and carefully edited contemporary photographs allow visitors to imagine what it was like to work on an excavation campaign in the early 20th century.

The exhibition is curated by Dr. Regina Hölzl, director of the Egyptian and Near-Eastern Collection of the Kunsthistorisches Museum, and Dr. Peter Jánosi, Assistant-Professor of Egyptology at the University of Vienna.