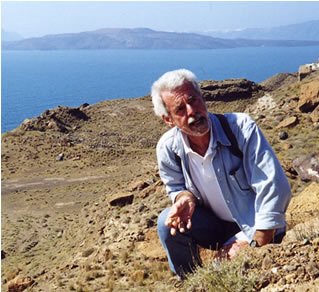 The largest volcanic eruption of the past 10,000 years occurred in the southern Aegean Sea on an island known in antiquity as Thera (Santorini).  A landscape was forever altered – as was a culture that thrived on that island, the Cycladic culture.  Here was the core of a thriving maritime trade network, in close communication with the Minoan culture on Crete, vaporized in a four/five-day volcanic explosion with regional impact via ash fall, pyroclastic flows and surges, earthquakes, tsunami, and possibly climate change.  These effects were felt throughout the eastern Mediterranean region and as far north as the Black Sea.  It appears the Cycladians had advanced warning of the impending disaster and escaped, some to Crete.  Residues of their culture – cities (Akrotiri), farmsteads, landscape, soils, household goods, and more – are preserved today on Santorini beneath a thick blanket of LBA volcanic material that provides stunning documentation of a thriving culture 3600 years ago – certainly the stuff of legends… one of perhaps the most astonishing events in human antiquity was also a disaster of epic proportions.