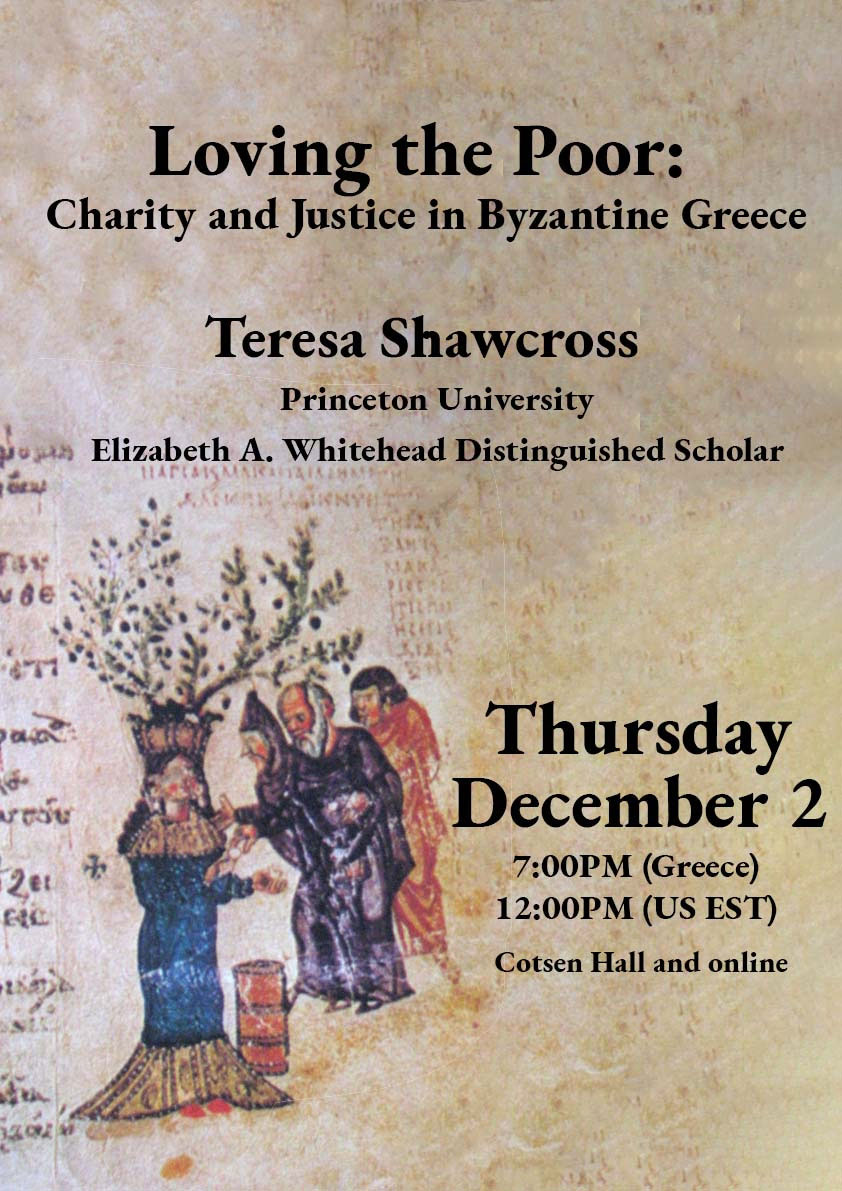 Loving the Poor: Charity and Justice in Byzantine Greece

Teresa Shawcross will address the topic “Loving the Poor: Charity and Justice in Byzantine Greece”.

The event is organized by the American School of Classical Studies at Athens.

During the Central Middle Ages, the economy of the Byzantine Empire was radically transformed as a result of the integration of the Mediterranean within expanding global networks of trade. Shifts in manufacturing, distribution and finance – together with increased urbanisation and migrations of rural populations – created unprecedented opportunity for the accumulation of wealth. But they also destabilised the traditional structures of society, resulting in new categories of the needy, destitute, and disenfranchised.

This talk looks at the ways in which the Byzantine church and state responded to these challenges. We shall consider, in particular, changing views of charity and justice in the period. The imperial province of ‘Hellas and the Peloponnese’ forms our main case study.

Teresa Shawcross is a historian of the Byzantine Empire and the Mediterranean World in the Middle Ages and Elizabeth A. Whitehead Distinguished Scholar at the American School of Classical Studies at Athens (2021-2022). Her first book (The Chronicle of Morea: Historiography in Crusader Greece) focused on the Crusader States, and discussed the evolution of the representation of identity in medieval historical narratives composed within a volatile region where different ethnicities were obliged to live alongside each other and outside political interests frequently intruded. Currently interested in medieval theories and practices of empire, she is completing a book on the late Byzantine Empire (Nightmares of Empire: Memory, Legitimation and Power in the Eastern Mediterranean, 13th-15th Centuries). She is also working on an edition and translation of the writings of the Italo-Byzantine political theorist and statesman Theodore Palaeologus, and conducting preliminary research for a monograph, tentatively entitled Cosmopolitan Networks in an Age of Revolutions: Ruling the Mediterranean World at the End of Empire, that seeks, by comparing the Byzantine and Holy Roman Empires, to analyse the collapse of imperial authority and the transformation of transregional power networks. The recent award of a New Directions Fellowship from the Mellon Foundation will enable her to explore in the future the interaction of Mediterranean with Central Asiatic history.

Professor Shawcross received an interdisciplinary education, earning her B.A., M.Phil. and D.Phil. from the University of Oxford, and her Maîtrise from the Université de Paris III-Sorbonne Nouvelle. She held a Hannah Seeger Davis Postdoctoral Fellowship at Princeton University and a Research Fellowship at Trinity Hall, Cambridge University, while her last position was that of Assistant Professor of Medieval European and Mediterranean History at Amherst College. She returned to Princeton in 2012, joining the faculty of the History Department and the Center for the Hellenic Studies.

*This event will be held live at Cotsen Hall and livestreamed on Zoom and the School’s YouTube channel.

**Registering for the lecture allows you to participate via Zoom and submit your questions during the Q&A session.