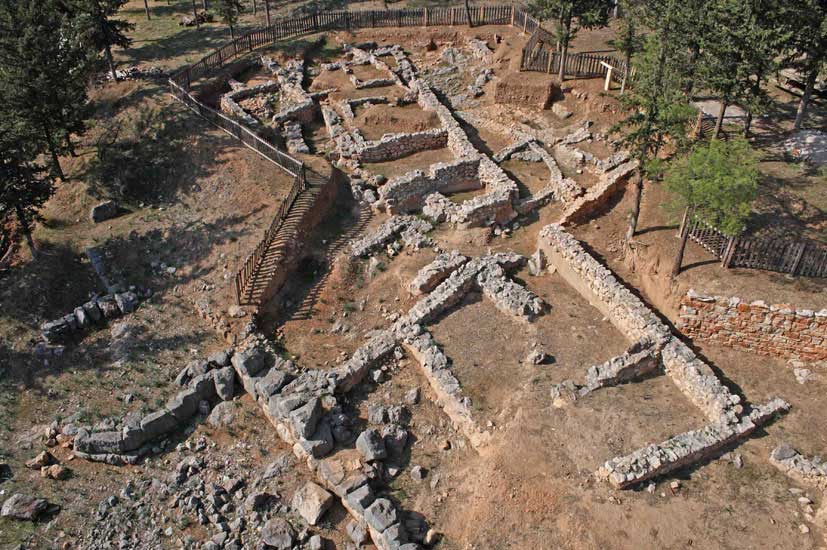 Recent archaeological evidence from the excavations of the MH settlement of Aspis at Argos (French School at Athens) seems to confirm the argument that more complex structures at the end of the period did not emerge suddenly but that they can be discerned in prior phases.

Architectural evidence indicates important changes in the layout of the settlement through time. During the earliest MH phases (MH I-II), the architectural record is deficient. However, in the next phase (MH IIIA), the existence of houses of different plan and size, as well as the presence of a strong circuit wall indicate some degree of social differentiation. In the final MH phase (MH IIIB/LH I) the most impressive construction is the row of oblong buildings surrounding the edge of the settlement, intended to control circulation and strengthen the protection of the settlement. In addition, a “cyclopean” fortification wall was constructed during the same phase. The overall fortress-like character of the settlement might reflect a manifestation of power, and at the same time an atmosphere of competition and social tensions in the region.

Evidence from the mortuary practices at Aspis also stresses the rise of social complexity. Amongst the architectural remains 18 MH graves came to light, belonging to children and adults; they date to the first and the second MH phases of the settlement (MH I-II/IIIA). The intramural burial practice seems to be connected with “simple” forms of social organisation, with emphasis to the role of the house, family relations, descent and ancestral land. In the final MH period, the transfer of burials outside the settlement, within formal cemeteries, and the appearance of elaborate mortuary practices are in accordance with the prevalence of more complex forms of social organization and more standardised communal institutions.

Interesting evidence is also offered by the material record. The presence of valuable items in the earliest phases of the settlement (high quality imported Aeginetan matt-painted and “Minoanising” pottery, a golden pendant) clearly indicates the existence of an early MH exchange network where Aspis was actively operating. On the other hand, the higher percentage of local pottery in the latest phase and the decrease of imported wares contrast with the evidence from other MH settlements, where imports increase towards the end of the MH. This strategy of strengthening local tradition may imply a kind of claiming of the indigenous identity and the traditional values against the influx of Minoan influence.

The lecture will be given in Greek.