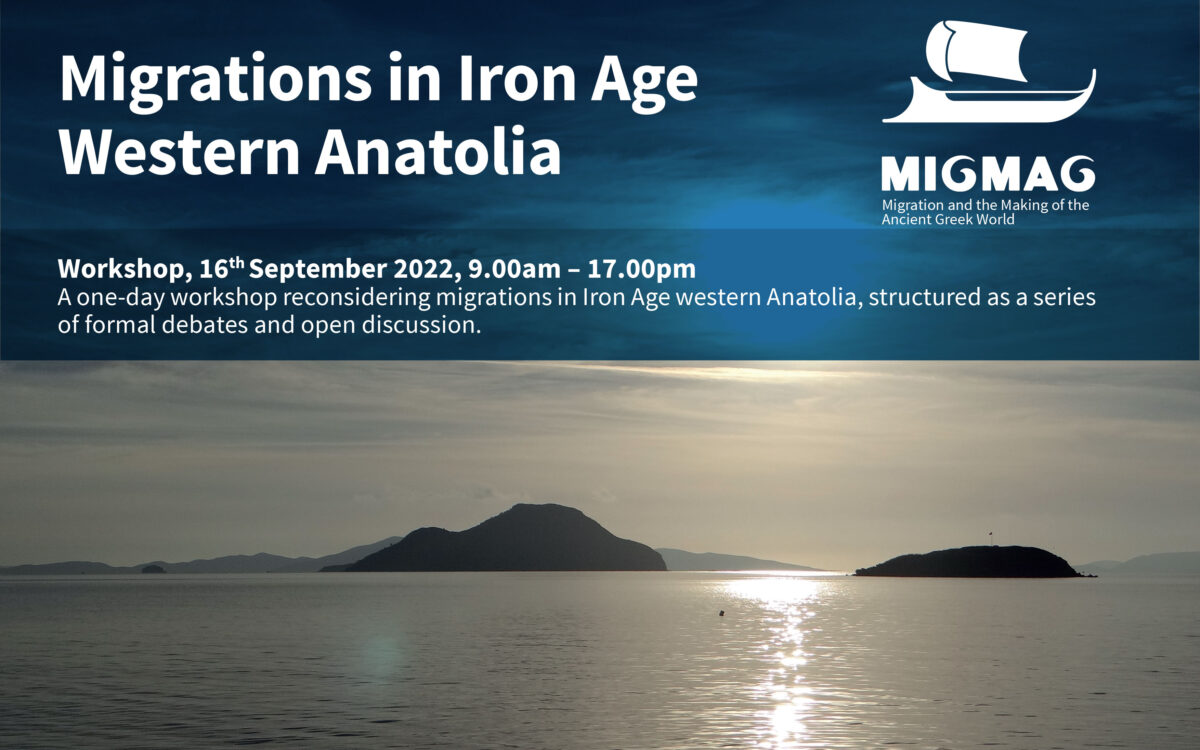 Migrations in Iron Age Western Anatolia is a one-day workshop organised as part of the Migration and the Making of the Ancient Greek World, a European Research Council funded project at the University of Vienna.

The workshop will be structured as a series of formal debates, presentations, and open discussion with the audience. It will take place on September 16, 2022, from 9am to 5pm, at Institut für Klassische Archäologie, Universität Wien (Franz Klein Gasse 1, A-1190 Wien).

Greek migrations – Ionian, Aeolian, and Dorian – into Anatolia at the beginning of the Early Iron Age have been a topic of immense interest to scholars since the 19th century. For over a hundred years, excavation and survey projects in western Anatolia have provided archaeological data that inform on the topic. There is a global community of us still interested in this subject, and we would like to have the opportunity to get together to discuss questions related to mobility during the Iron Age in a constructive yet informal workshop setting. In a structured debate, this workshop aims to scrutinise the ways in which our notions about migrations have been constructed. Participants will debate arguments in favour and against the paradigm of the ‘Ionian migration’ and of the concept of ‘Greek identity’ of the early first millennium BCE western Anatolian communities, followed by open discussion with the audience. While the focus is on the Iron Age and Archaic Ionia, we invite insights on parallel processes from the neighbouring regions of Caria, Lydia, Aeolis, Troad, and Phrygia for a more robust assessment of the question whether Ionia experienced different historical processes (i.e., migrations) than its Anatolian neighbours.

For a detailed programme and further information please visit: https://klass-archaeologie.univie.ac.at/news-events/einzelansicht/news/migrations-in-iron-age-western-anatolia/?tx_news_pi1%5Bcontroller%5D=News&tx_news_pi1%5Baction%5D=detail&cHash=ad05e4695f7afc11328ccf3f5880c924

If you wish to attend and participate, please email Dr Jana Mokrišová at [email protected]