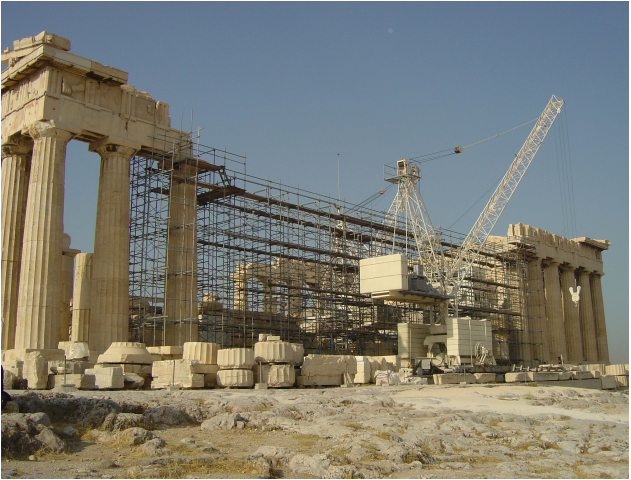 New observations regarding the north colonnade by Lena Lambrinou, based on evidence that emerged during the measuring of the disassembled architectural members of the colonnade.
01 02 '17 11:09

The Parthenon’s North Colonnade: Comments on its Construction

Lena Lambrinou will address the topic “The Parthenon’s North Colonnade: Comments on its Construction”. The event is part of “The circle – Dialogues on Greek and Roman Architecture”.

The Parthenon’s North Colonnade stood intact for more than two millennia, until 1687 when the middle eight columns were blown outward by an enormous explosion triggered by a Venetian artillery shell fired into the temple, which ignited an ammunition dump stored there by the Ottoman Turks. This major injury to the building was not completely repaired until the restoration of N. Balanos3 in 1923-1931. Mistakes in choice of materials and in the repositioning of the ancient architectural members, incurred during this early 20th century project, led the Greek Ministry of Culture to consider a new intervention which could remedy these problems for the long-term preservation of the building. The resulting study for the restoration of the North Colonnade, originally prepared in 1998 by civil engineer K. Zambas, was updated by the present author for the columns and architraves in 2001- 2002. The new intervention began in 2001 and was completed in 2009.

New observations regarding the north colonnade are presented based on evidence that emerged during the measuring of the disassembled architectural members of the colonnade. Some of these observations constitute new adjacency criteria useful for discovering the original positions of the disassembled members, while others can help to increase our knowledge concerning the original construction procedure and the relationship between planning and implementation.Presented initially are observations on the form of the entasis and the slight variations that exist in the circumferential diameters of the column drums, as indicated by the deepest point of the flutes, which constitute a new criterion for discovering the original adjacencies of the drums.Observations on the form of the surface of the stylobate under the columns and on the utility of the etched circles found at the base of the columns are then presented, while the differential forms of treatment evident on the undersurfaces of the columns are explained through the identification of distinct craftsmanship attributable to different stonemasons.A chronological approximation for the original construction of the columns of the peristasis is attempted through a combination of information garnered from the original construction inscriptions, but also through contemporary knowledge of the present-day procedure and requirements for the chiseling of similar columns.