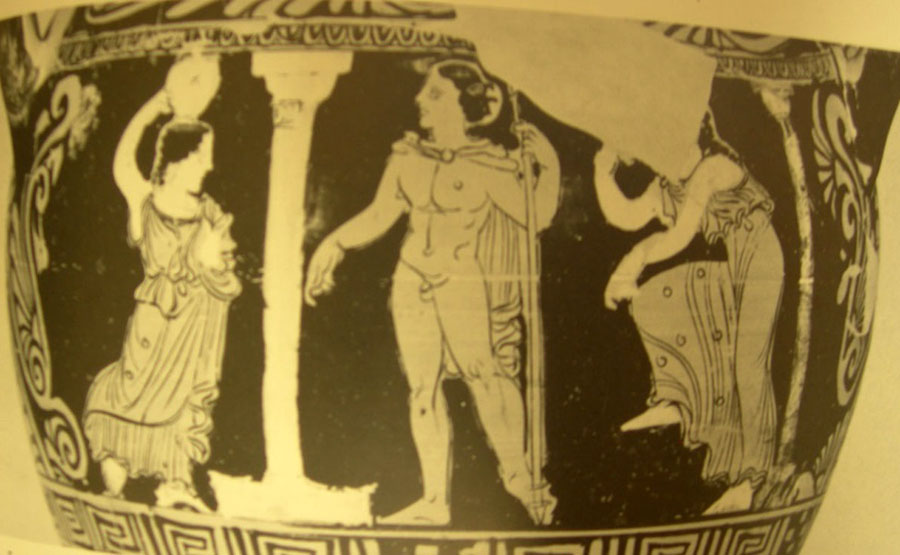 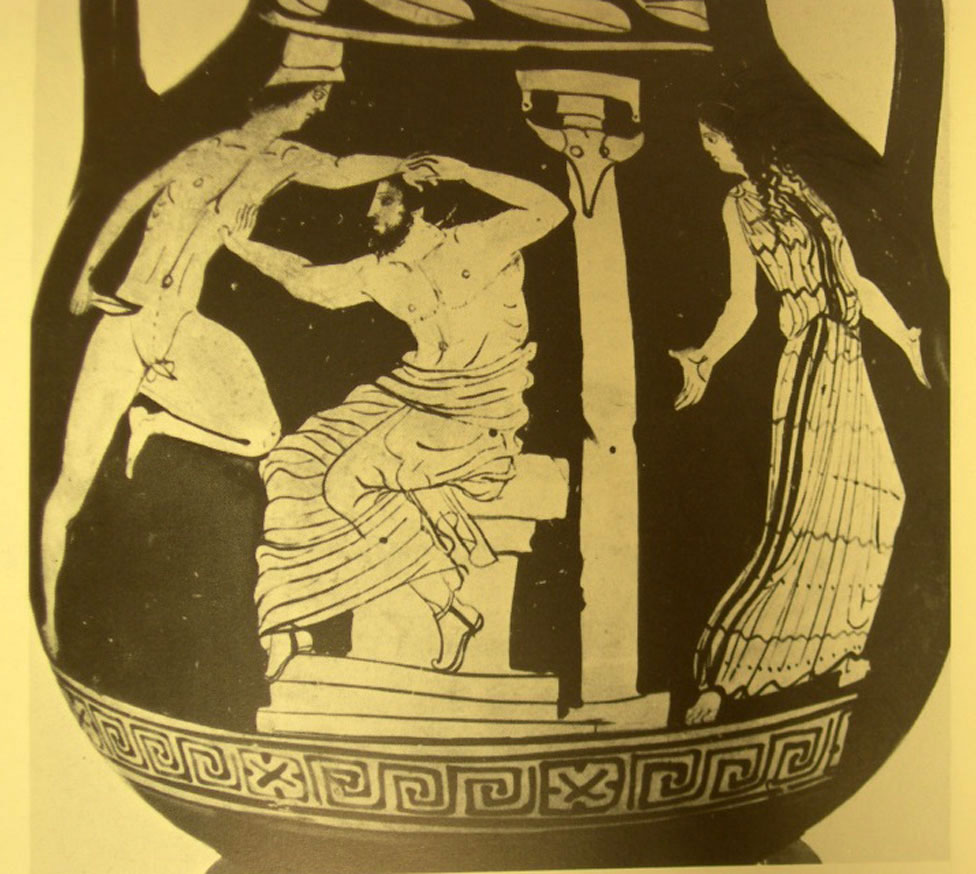 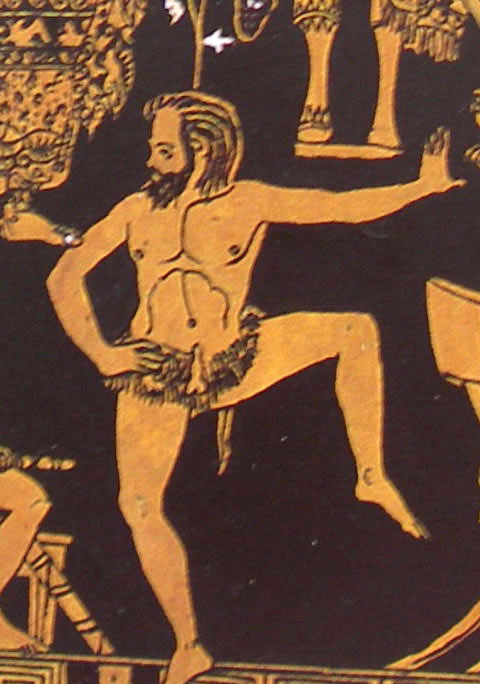 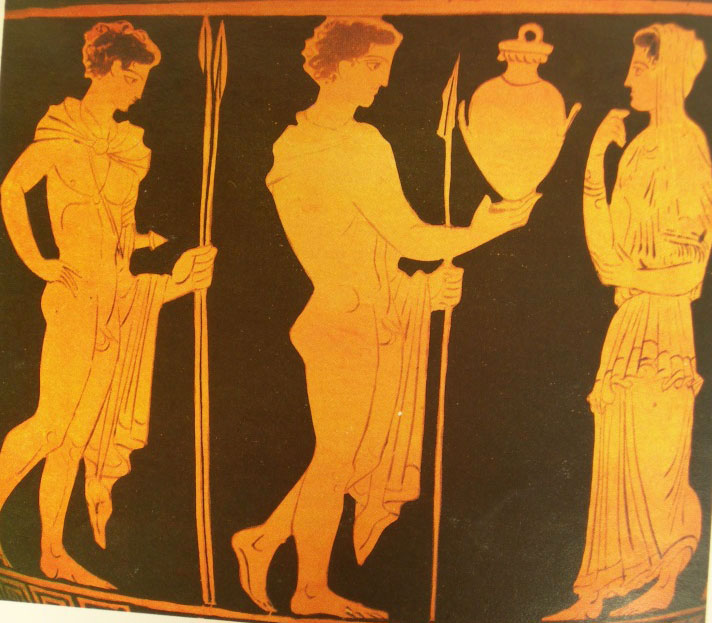 The chorus’ leader of the drama “Electra” in two vase paintings

In two South Italian vase paintings dated to the early 4th century B.C. and possibly inspired by the Euripidean tragedy Electra two young female figures are identified with the leader of the chorus of the above drama, on the basis of the dancing movements of their bodies. The literary source that refers to the tragic dance, the dancing movements and the chorus’ members of the ancient drama is Pollux.

There are two 4th century South Italian vase paintings connected with a tragedy of Euripides, Electra. The first one comes from an Etruscan red-figured column crater dated to the early 4th century B.C. (fig. 1) (note 3). In the body of this vase a female figure carrying a hydria, a young traveler and a second female figure are discerned. The above-mentioned depiction is possibly connected to the incidence of the encounter of Electra and Orestes as described in the beginning of the Euripidean Electra; However, “in such a case the artist might have made his meaning clearer”, according to Beazley (note 4). In the drama Electra the heroine comes out of her shabby-looking old house with a hydria placed on her head Ἠλέκτρα: Ὦ νὺξ μέλαινα, χρυσέων ἄστρων τροφέ, ἐν ᾗ τόδ’ ἄγγος τῷδ’ ἐφεδρεῦον κάρᾳ φέρουσα πηγὰς ποταμίας μετέρχομαι (note 5) and the encounter of the two relatives takes place near Electra’s house: –Ἠλέκτρα: Οἴμοι, γυναῖκες, ἐξέβην θρηνημάτων. Ξένοι τινὲς παρ’ οἶκον οἳδ’ ἐφεστίους εὐνὰς ἔχοντες ἐξανίστανται λόχου (note 6). This is indeed the case in the Etruscan vase painting as one of the women has a hydria on her head. In addition, the column, which is placed between the young woman with the hydria and the young traveler, possibly symbolizes Electra’s house. In other depictions influenced by the Sophoclean Electra the column represents Agamemnon’s tomb, where Electra and Orestes meet each other (fig. 2) (note 7). Cambitoglou has underlined that columns were useful for the symbolic depiction of buildings both in the Attic and in the South Italian vase painting (note 8). Despite the similarities we should also mention a few differences between figure 1 and the Euripidean drama Electra. In the specific vase painting Electra is represented with long hair and clean clothes as opposed to the tragedy of Euripides, where the young woman has her hair cropped close, χέρα τε κρᾶτ’ ἐπί κούριμον (note 9), ἀλλ’ –εἰσορῶ γὰρ τήνδε προσπόλον τινά, πηγαῖον ἄχθος ἐν κεκαρμένῳ κάρᾳ φέρουσαν (note 10) and wears filthy garments καὶ τρύχη τάδ’ ἐμῶν πέπλων, εἰ πρέποντ’ Ἀγαμέμνονος κούρᾳ ’σται βασιλείᾳ (note 11). The existence of the second female figure could be justified if we consider that she represents the leader of the chorus (note 12) of the drama Electra. The chorus is present during the meeting of Electra and Orestes given the fact that Electra addresses to the chorus’ women during this incident (note 13). In addition, the connection of the second female figure with the leader of the chorus is corroborated by the dancing movement of her body and specifically of her right leg, which reminds the equivalent movement of Nikoleo in the vase of Pronomos. Nikoleos (fig. 4) is a dancing actor (note 14) with a Satyr’s mask and a piece of cloth the so-called somation (σωμάτιον), which contains the phallus and a tail (note 15). Finally, we should not forget to mention that Pylades is absent from the above mentioned Etruscan vase painting, despite the fact that in the Euripidean Electra he accompanies Orestes, since Electra talks about strangers and not about a single stranger hidden near her home (note 16). A possible explanation for the absence of Pylades is that the artist might have chosen the depiction of the basic personae of the incident.

Our second vase painting decorates a Lucanian red-figured pelike by the “Vaste Painter” of the early 4th century B.C. (fig. 6) (note 17). In the depiction of this vase Orestes grasps Aegisthus, who sits on an altar, by his hair, in order to wound him mortally with a dagger. A column with bucranium is discerned behind Aegisthus. The fact that the artist has included in his iconographical synthesis the altar and the bucranium brings to mind the following verses of the drama Electra: –Ἄγγελος: Λαβὼν δὲ προχύτας μητρὸς εὐνέτης σέθεν ἔβαλλε βωμούς … Κἄσφαξ’ ἐπ’ ὤμων μόσχον ὡς ἦραν χεροῖν δμῶες (note 18). According to the logical assumption of Moret (note 19), the existence of the altar and the bucranium proves that the episode of the murder of Aegisthus takes place in a sacred area. Next to the column a female figure with her head turned backwards has stretched out her arms and moves to the right. This woman could be Electra (note 20). Moret (note 21) does not identify this figure neither as Clytemnestra nor as a female servant, because no women were present when Aegisthus was ready to make a sacrifice to the Nymphs, according to the Euripidean tragedy (note 22). In contrast, Moret characterizes this female figure as a conventional iconographic form included in violent scenes that take place in sacred areas (note 23). This woman could be connected with the chorus’ leader of the tragedy Electra for two reasons: The first one is that, although she was absent from the incident of the murder of Aegisthus by Orestes, she repeated the pleasant news of Aegisthus’ death to Electra after the messenger’s speech (note 24): Χορός: Σύ μὲν νυν ἀγάλματ’ ἄειρε κρατί. Τὸ δ’ ἁμέτερον χωρήσεται Μούσαισι χόρευμα φίλον. Νῦν οἱ πάρος ἁμέτεροι γαίας τυραννεύσουσι φίλοι βασιλῆες, δικαίως … τοὺς δ’ ἀδίκους καθελόντες. Ἀλλ’ ἴτω ξύναυλος βοὰ χαρᾷ (note 25). The second reason is that the movements of her hands and mainly of her palms, which are turned upwards, refer to a specific motion of hands called σιμή χείρ by Pollux (note 26).

This brief presentation underlines the utility of literary sources’ contribution to the iconographic material’s interpretation and iconography’s usefulness to the philological texts’ comprehension.