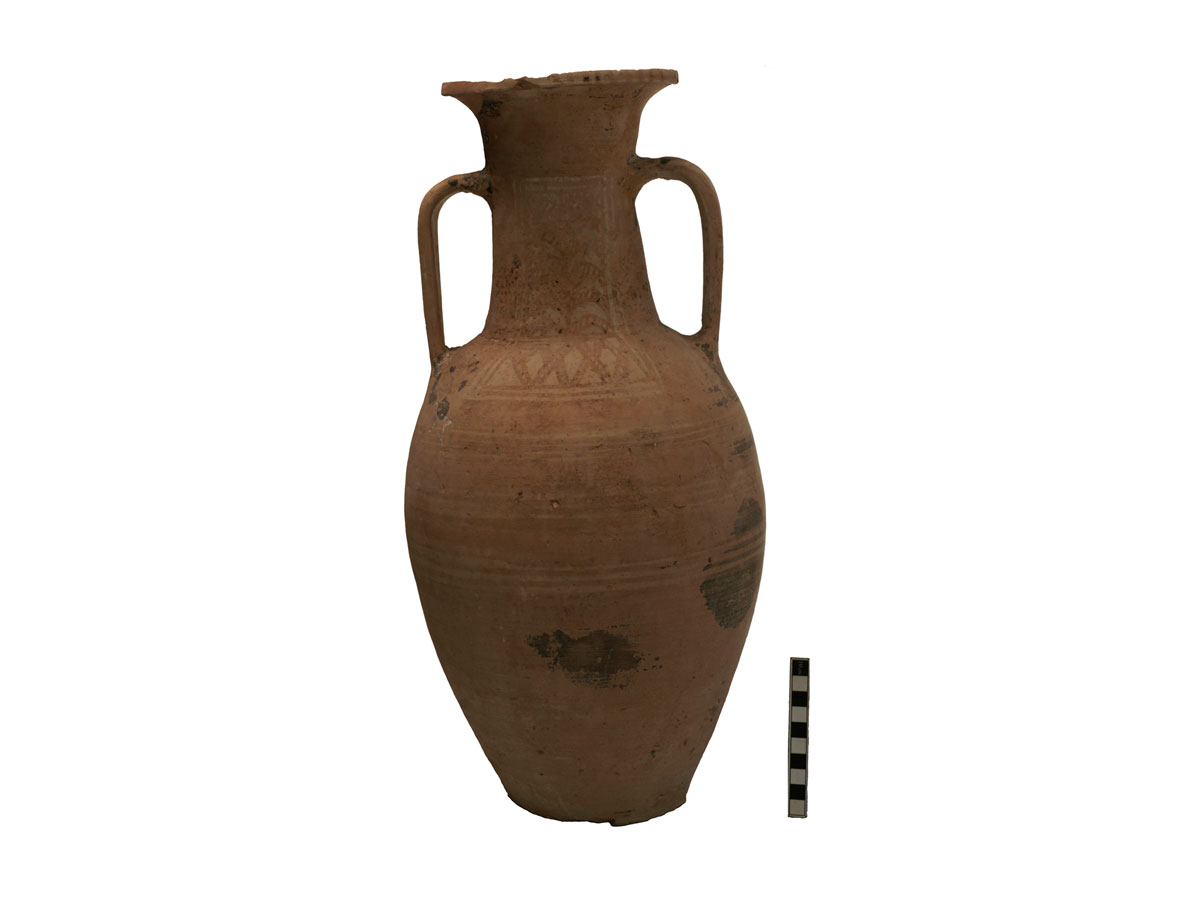 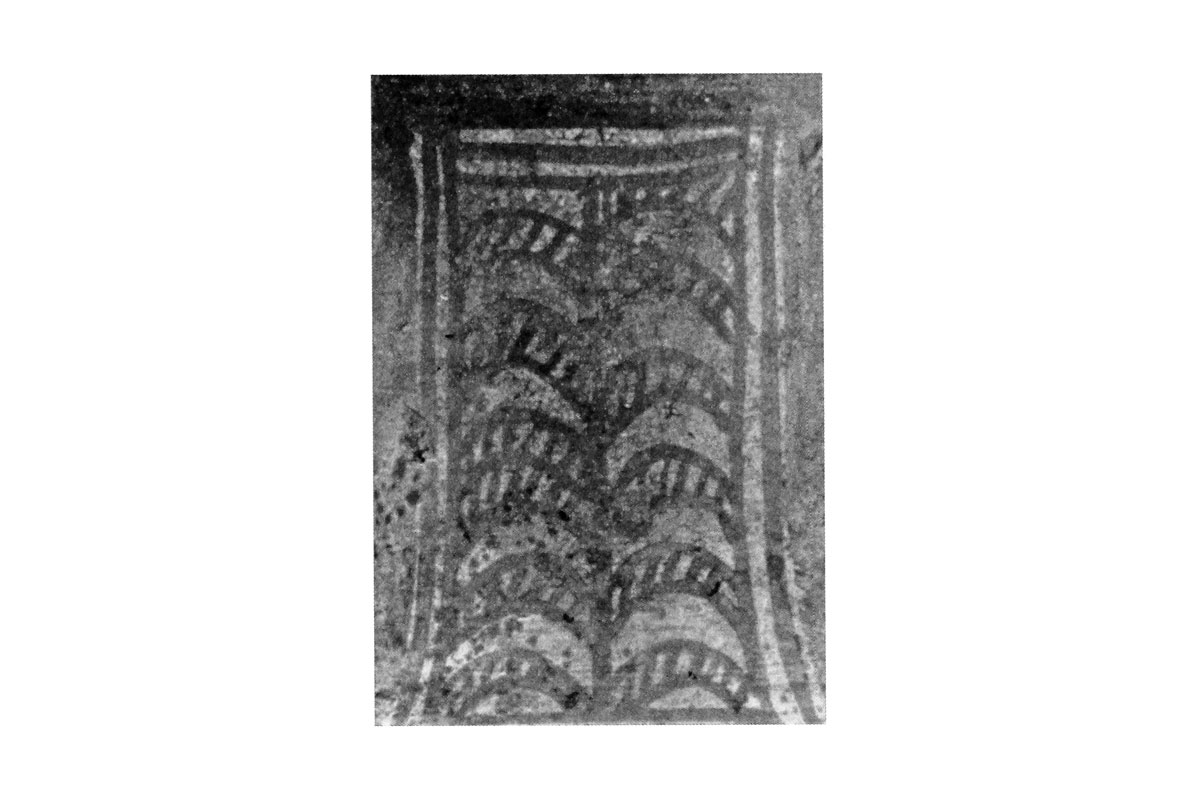 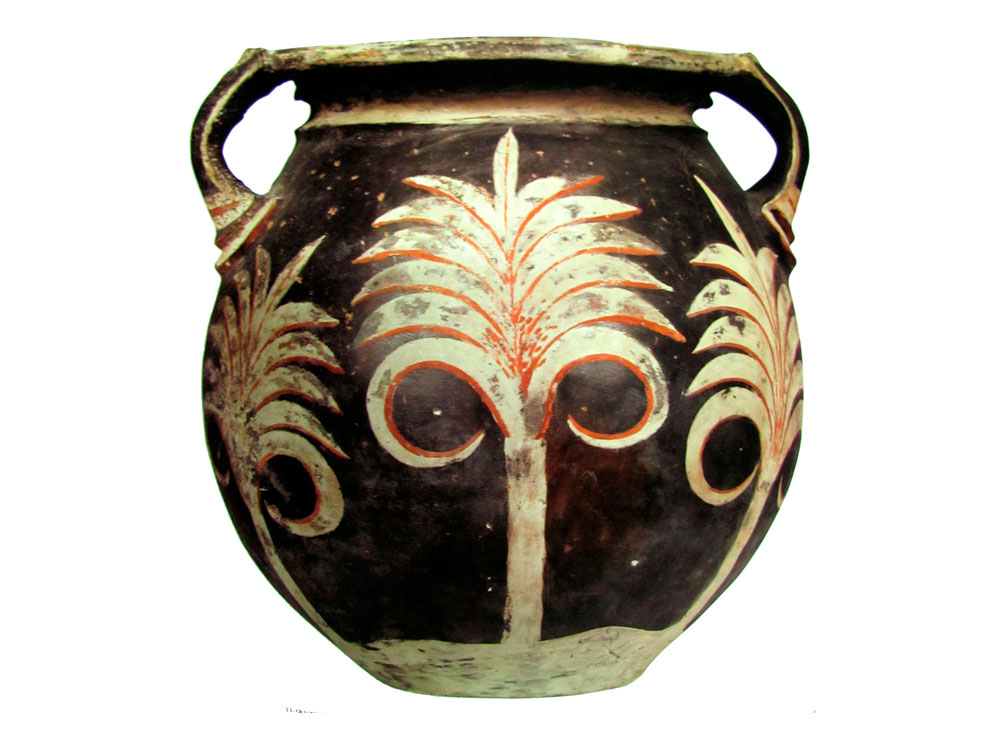 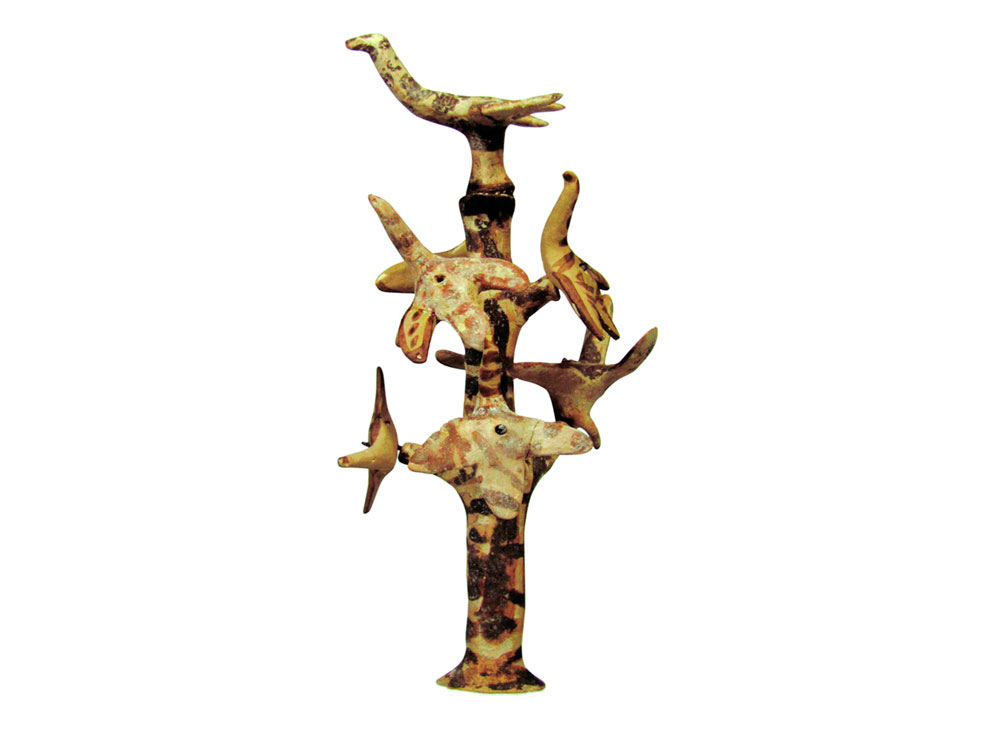 A “Tree of Life” depiction on a LG amphora

From Aitania / Pediada, in Central Crete

In 1954 a small rock-cut tomb, excavated at “Phonias’’ site, west of Aitania, Pediada, yielded twenty six vessels dated to the Geometric period (Πλάτων 1954, p. 515). These vases were restored and kept in Heraklion Archaeological Museum, until similar finds from recent rescue excavations conducted by the 23rd Ephorate of Prehistoric and Classical Antiquities in the same region (Μανδαλάκη 1997, p. 1000), necessitating their reviewing (Παπαδάκη, Γκαλανάκη 2012; Γκαλανάκη, Παπαδάκη in print).

The palm tree depiction on the LG amphora

N. Platon’s excavation find, the intact late Geometric amphora, presented in this article, has a height of a 0.474 m. and is made of brown local clay (figs. 1, 1a). Its delicate ovoid body is decorated with parallel strips of faded brown paint, while the shoulders and the neck have “metopes” consisting of two uneven bands of the same color. The lower of them bears hatched strips drawn crosswise, whilst the upper one the abstract figure of a palm tree; emerging asymmetrically, in pairs or individually, curved leaves with oblique stripping and cut ends grow out of a slender trunk. One of the main features of this specific tree motif is its similarity with corresponding themes encountered in the Dodecanese during the LG period (note 1) (Coldstream 1968, pl. 63a; Coldstream 1997, pp. 329-333, fig. 78c thereof; for Cretan examples, see Τσιποπούλου 2005, p. 497). Furthermore, its branches recall the birds’ feathers as well as of the hybrid creatures from Knossos metalwork and pottery workshops of the same period (Coldstream 1974, 1982; Galanaki in print). This fact implies the strong connections and interactions amongst Eastern Mediterranean workshops, combining local traditions with artistic patterns common to the eastern world (Σταμπολίδης 1998; Σταμπολίδης, Καρέτσου 2003).

The decoration of the Aitania amphora is related to the great discussion concerning the tree and its symbolism(s). As is widely admitted, the tree is a diachronic and intercultural artistic motif of a ‘totemic’ character (Κούρου 1998, p. 29). The seasonal regeneration of its leaves and fruits has always caused human admiration and awe (Danthine 1937; Parpola 1993; Κούρου 1998). Incised tree branches adorn Paleolithic bone tools (Guthrie 2005, p. 21) whilst an early depiction of both a tree and a woman is preserved on the walls of the Mesolithic cave “Guevas de la Arana” in Spain (Κυπαρίσση-Αποστολίκα 1998, p. 39). Moreover, tree motif evolves at the dawn of the so-called Neolithic Revolution within the “Natufian” hunting and food gathering communities of Mesopotamia (Cauvin 1997), while it forms an integral element of the iconographic reality of the agricultural societies in the same region, revealing its direct response to the new economic strategies (Hauptmann, Özdogan 2007; Watkins 2007). From the third millennium on, stylized and often standing on a pedestal, it accompanies multifaceted scenes that imply various “rituals” (Roaf 1990). Gradually, occasionally combined with astral symbols such as the sun and the moon, or in heraldic compositions with two zoomorphic or hybrid creatures, the motif of tree becomes the focus of religious scenes that emphasize its sacred nature (Keel, Uchlinger 1990). From the second millennium onwards (Karageorghis 1979, pl. XXV: e.2; Hiller 2001, pp. 77, 79, pl. 21) it appears in almost all forms of artistic expression in the Near East, Cyprus (Caubet, Hermany, Karageorghis 1992) and the Aegean.

The semantics of the tree in the Aegean world has been a favorite subject of research for more than a century (see among others Evans 1901; Λεμπέση 1985; Μαρινάτος 1985; Niemeier 1989; Κούρου 1998, 2001; Σακελλαράκης, Σακελλαράκη 2011). Numerous remarkable studies examine the appearance, evolution, extinction, recurrence, absence, presence and generally speaking all the “transformations” (Μπουλώτης 1993) of this particular motif. This implies that at similar cultural levels, which inevitably diverge in particular nonessential details, comparable options are very often adopted. Moreover, this fact confirms the ability of powerful symbolic images to be easily adapted to different social, economic, religious or ideological contexts (Leroi-Gourhan 1990, pp. 130-131).

In the above mentioned frame, the tree motif survives in the strictly aniconic art of the Geometric period (Brock 1957; Αλεξίου 1971, p. 622; Coldstream 1984; Τσιποπούλου 2005, p. 497), whilst it becomes particularly popular during the Orientalizing period, the artistic vocabulary of which reclaimed Minoan and Mycenaean iconographic patterns, reflecting the retainment of the nature’s worship in the collective memory and everyday life of the respective societies (Κούρου 1998; Galanaki n print). Specifically, the palm tree, like the one adorning the Aitania amphora, is a decorative theme that appears in the Aegean iconography as soon as MM II period (Horning 1999; Antognelli 2012). Thus, white palms on a black background, referring to the Cretan native flora, adorn clay vases of the mature Kamares style (fig. 2) (Δημοπούλου-Ρεθεμιωτάκη 2005, p. 257). During LM/LH I-III period, the palm tree, whether formalized in shape or not, is depicted as the main or a supplementary subject of several compositions, often accompanying religious scenes (Nilsson 1950; Hägg 1983; Younger 1988; Μαρινάτος 1993; Ρεθεμιωτάκης 1997, pp. 407-421; Δημοπούλου,Ρεθεμιωτάκης 2004) and burial practices (Long 1974; Watrous 1991; Antognelli 2012, with concentrated bibliography). Furthermore, the depiction of the palm tree packed with symbolic meaning, along with elements of the plant and animal species in LM IIIA2/B larnakes (Mavriyannaki 1972; Betancourt 1985, pp. 94-96; Watrous 1991) signals the iconological beginning of the Underworld representation as an imagined “paradise” (Ρεθεμιωτάκης, Εγγλέζου, 2010, p. 194). In this context, the palm tree is often identified as the eastern motif of the “Tree of Life” (Antognelli 2012, with the relevant bibliography).

The depiction, therefore, of the palm tree on the Aitania amphora is not accidental. As it is widely known, compositions with groups of trees with birds roosting on their branches, sometimes accompanied by the goddess of nature, are particularly popular in Geometric funerary vases at Knossos (Coldstream 1984; Coldstream and Catling 1996, pp. 315 ff., figs. 109, 133, 150; Ρεθεμιωτάκης, Εγγλέζου, 2010, p. 194). This favorite motif is also depicted in the two well-known three-dimensional clay models from the Cemetery of Fortrezza (Brock 1957, pp. 41-43, pl. 36) of the sacred tree with birds (fig. 3), as a codified iconological version of the afterlife. The tree, moreover, as the bearer of everlasting life, coincides ultimately with Immortality. Having its roots in the earth and branches raised up to the sky it links both the Under and the Upper World as well as the World Beyond and by association, the past, the present and the time yet to come. In conclusion, the palm tree of the Aitania amphora is a symbolic image expressing the deep faith of the people in life’s constant regeneration.

* We thank Professor L. Platon for material made available to us, Professor N. Stampolidis, the ex-director of 23rd EPCA A. Kanta, Professor N. Kourou, the photographer I. Papadakis-Ploumidis, the archaeologist D. Kontopodi and the designer G. Pantermarakis. The article is published in Greek in the volume by N. Chr. Stampolidis, A. Kanta, A. Giannikouri (eds.), Athanasia. The Earthly, the Celestial and the Underworld in the Mediterranean from the Late Bronze Age and the Early Iron Age, International Archaeological Conference, Rhodes, 28-31 May 2009, Heraklion 2012, pp. 335-340.

NOTES
1. We thank professor N. Kourou for bringing this to our attention.