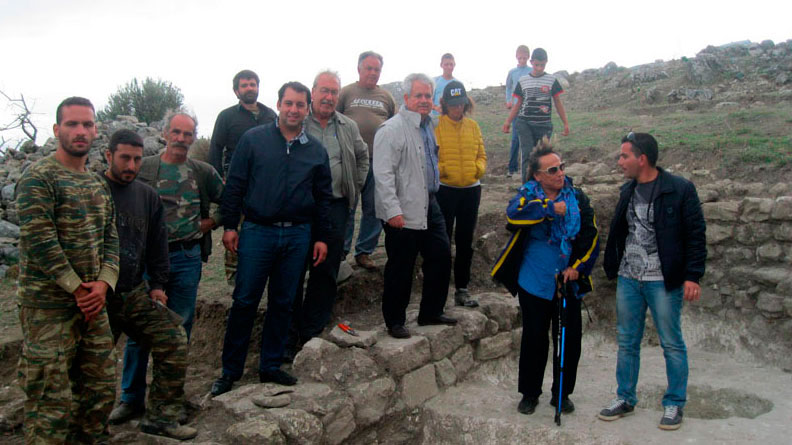 Malevisi Municipality is financing the excavations

An important archaeological excavation has just started at the “Koupos” site, by Krousona, not far from Herakleion (Crete). The site has been known since the early 20th century for the existence of an ancient city whose name remains unknown. The actual project is made possible by the collaboration between the 13th Ephorate of Prehistoric and Classical Antiquities and the Malevisi Municipality. Mayor Kostas Mamoulakis has taken in charge all expenses, while Athanasia Kanta, Director of the 13th EPCA, supervises the work. Furthermore, to facilitate the excavations, Malevizi Municipality has bought a big lot of land.

The site has been first investigated by the 13th EPCA back in the 1980s. A large settlement came to light, inhabited from the Late Minoan to the Hellenistic years (1200-100 BC). Many Archaic buildings had well built rooms. Inside the rooms were found the stone bases of the wooden columns that used to hold the roof. Pits carved in the rock contained ceramics and other findings that seem to have been offered for the house’s solid foundations.

Vases of special interest, vessels and tool equipment, lamps and animal figurines were found inside the buildings. Of particular importance is the sum of Archaic clay relief plaque representing female figures, richly dressed, standing or seated, as well as male figures and Satyrs. Special among them stand the clay plaques with a female figure in relief, most definitely a goddess, naked or dressed, wearing a high polos. The big part of a pithos neck, dating also from the 7th c., constitutes a unique finding: it is decorated with a repeated mythical theme that most probably depicts Clytemnestra’s murder by Orestes, in presence of Electra. Important ceramic and other objects testify this settlement’s life during the 8th c. BC as well.

We know that the Koupos settlement has been inhabited since at least the mature Late Minoan IIIc time. At the other end, Hellenistic findings, such as ceramic and clay relief tablets, extend the settlement’s life to the 3rd and 2nd c. BC.