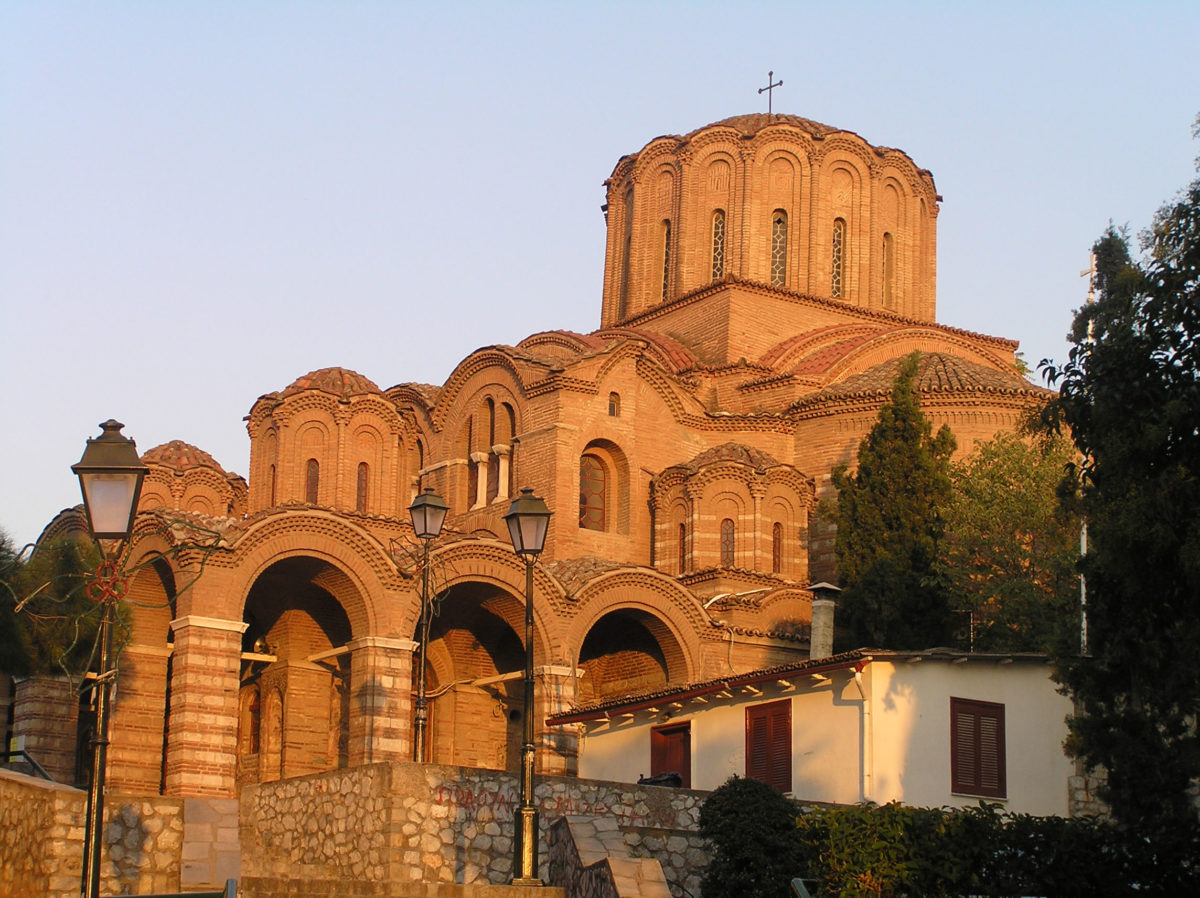 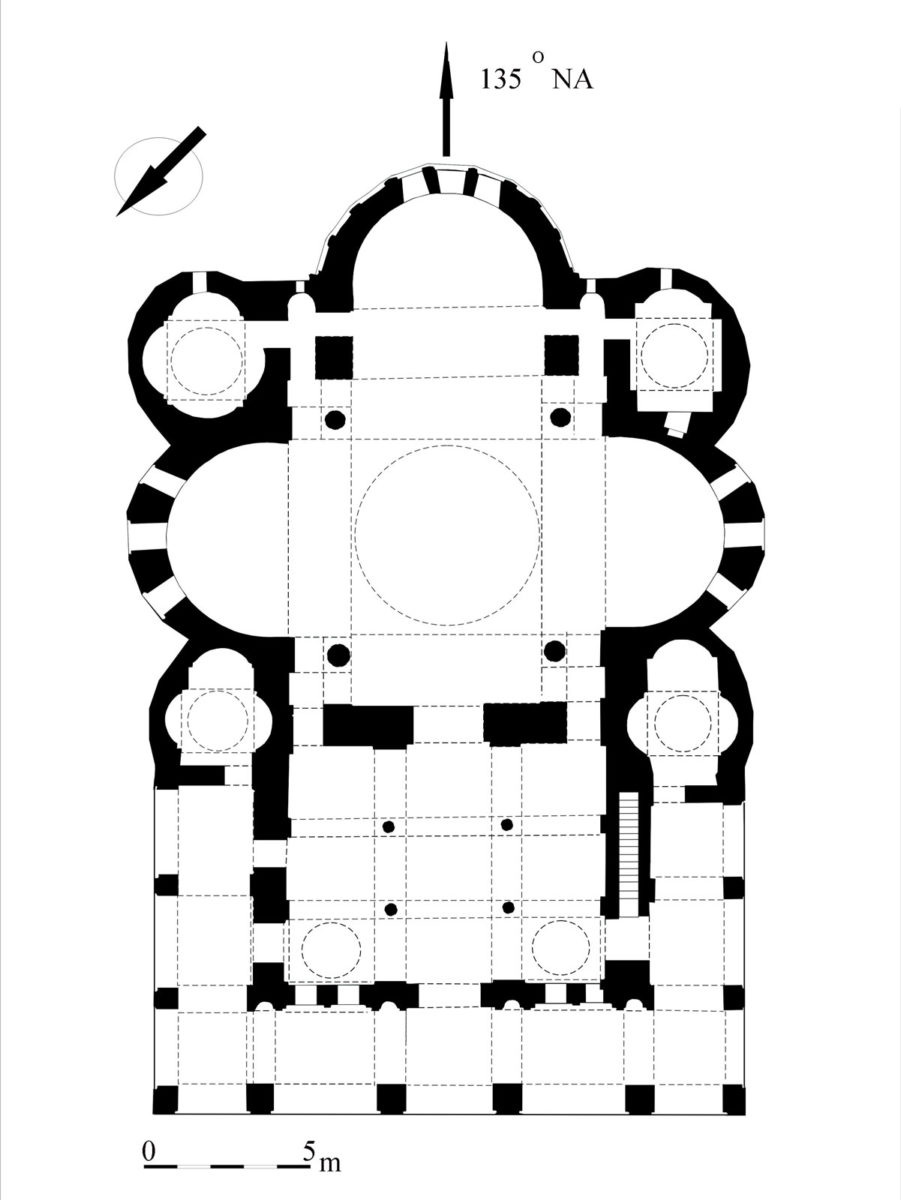 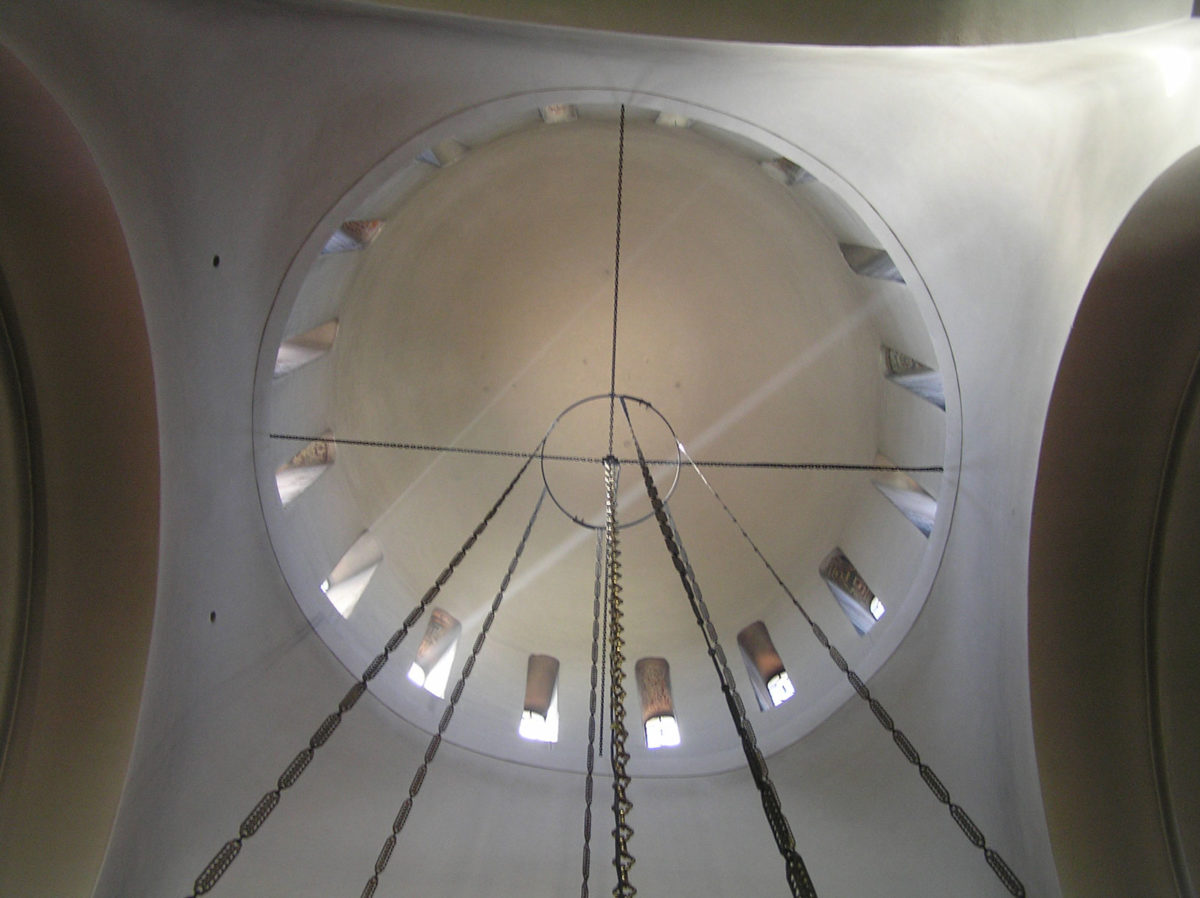 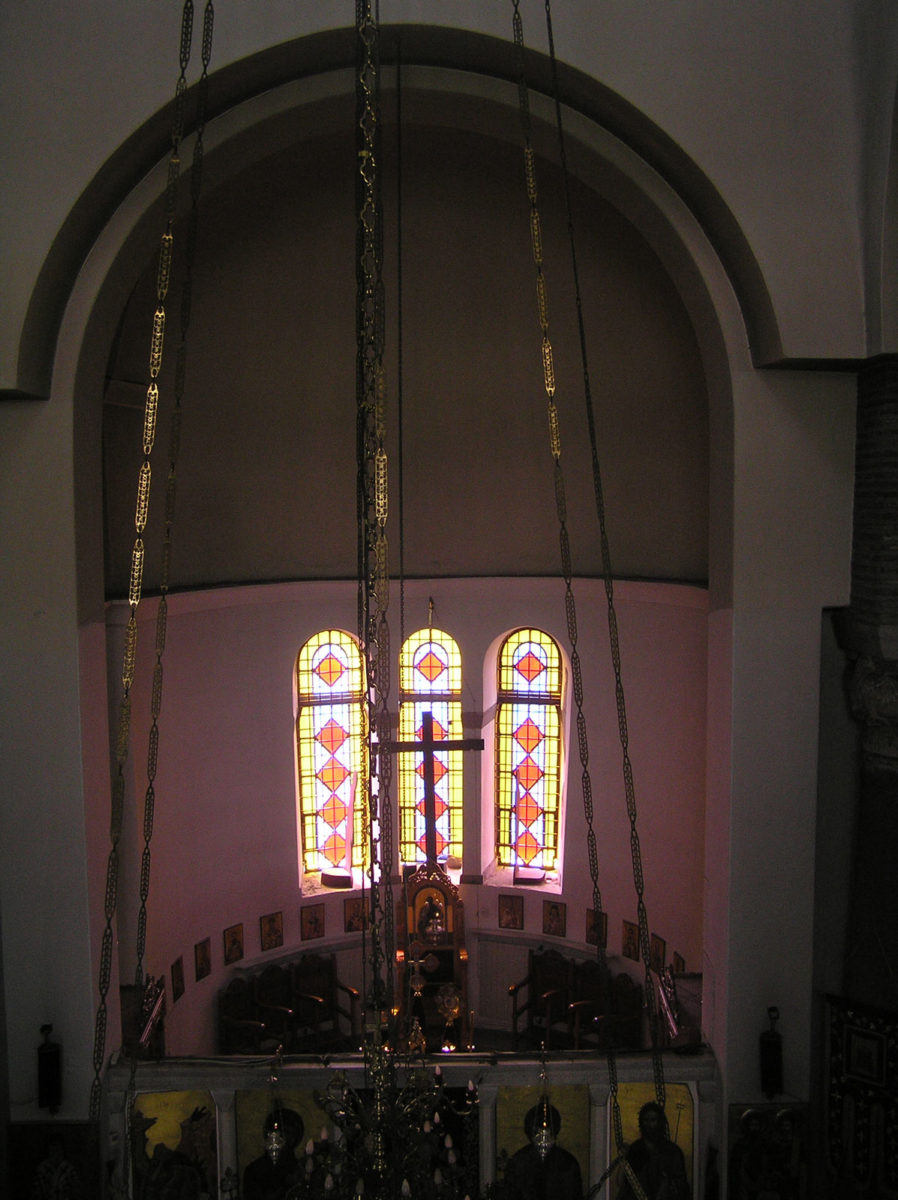 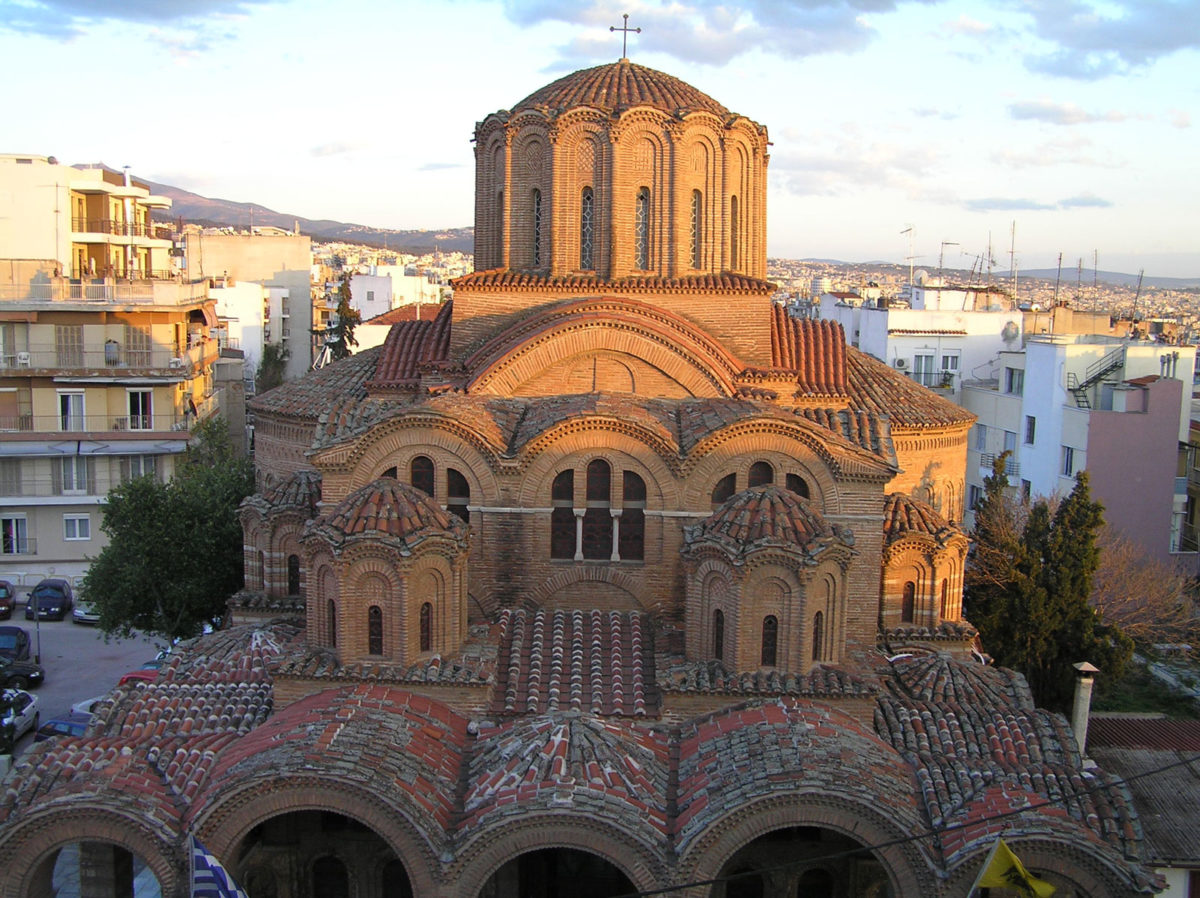 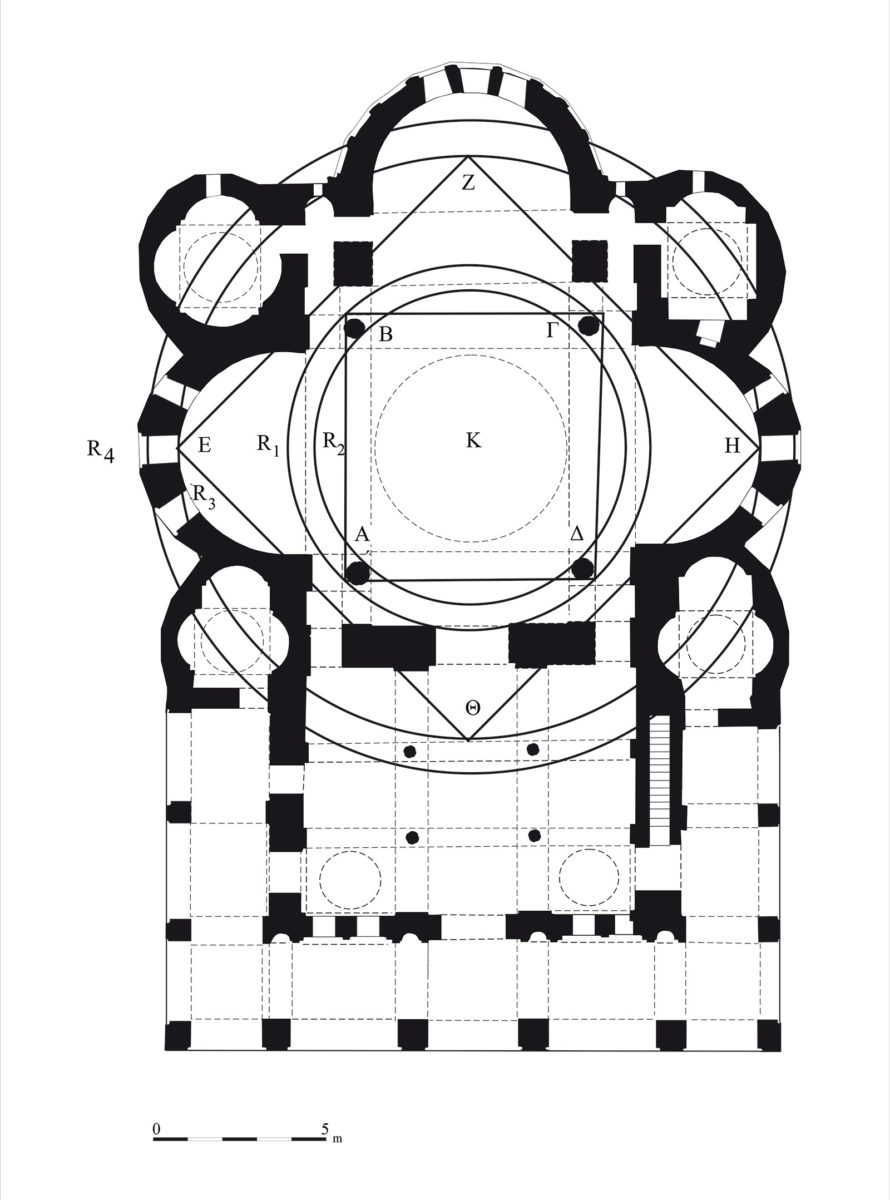 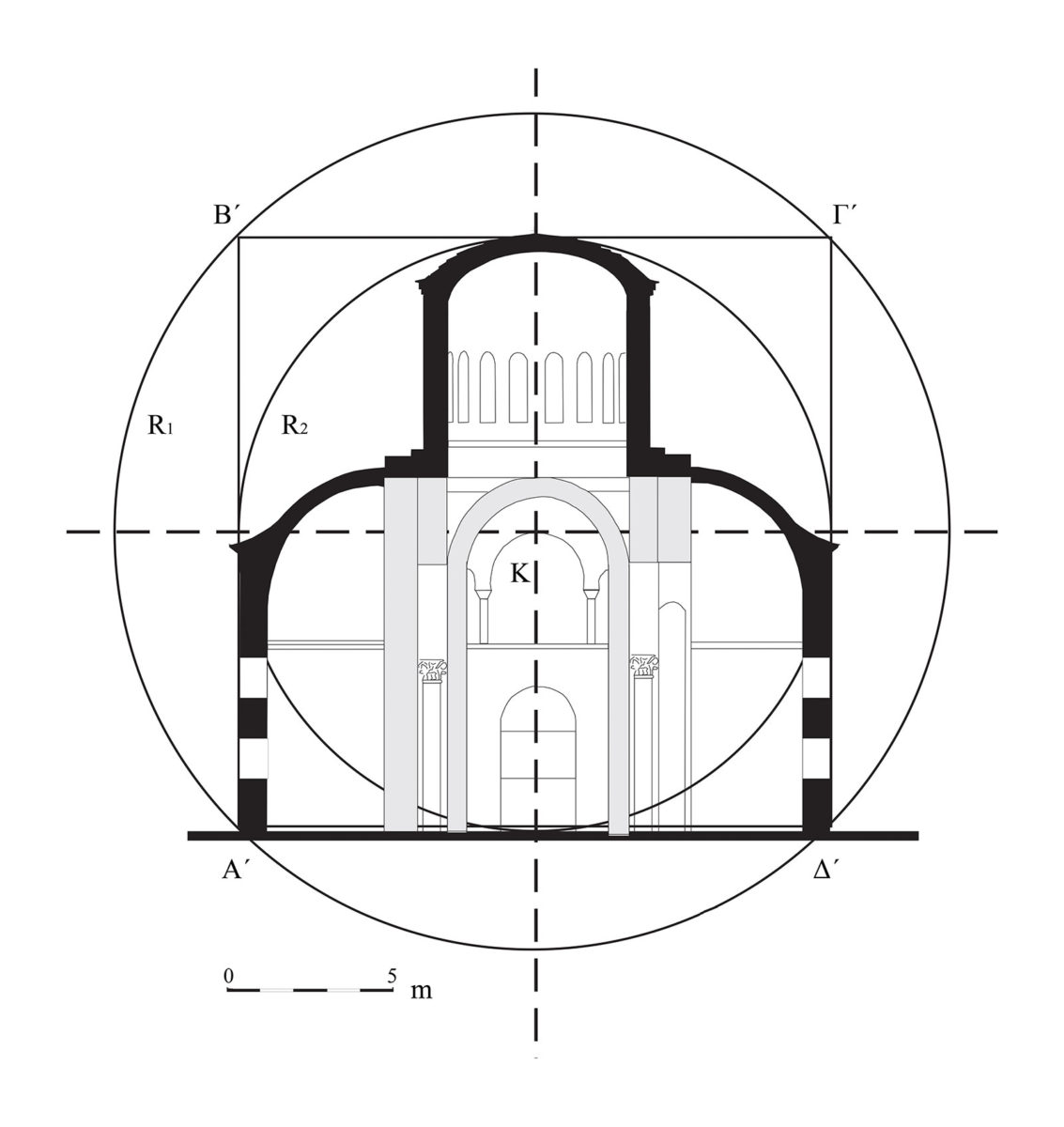 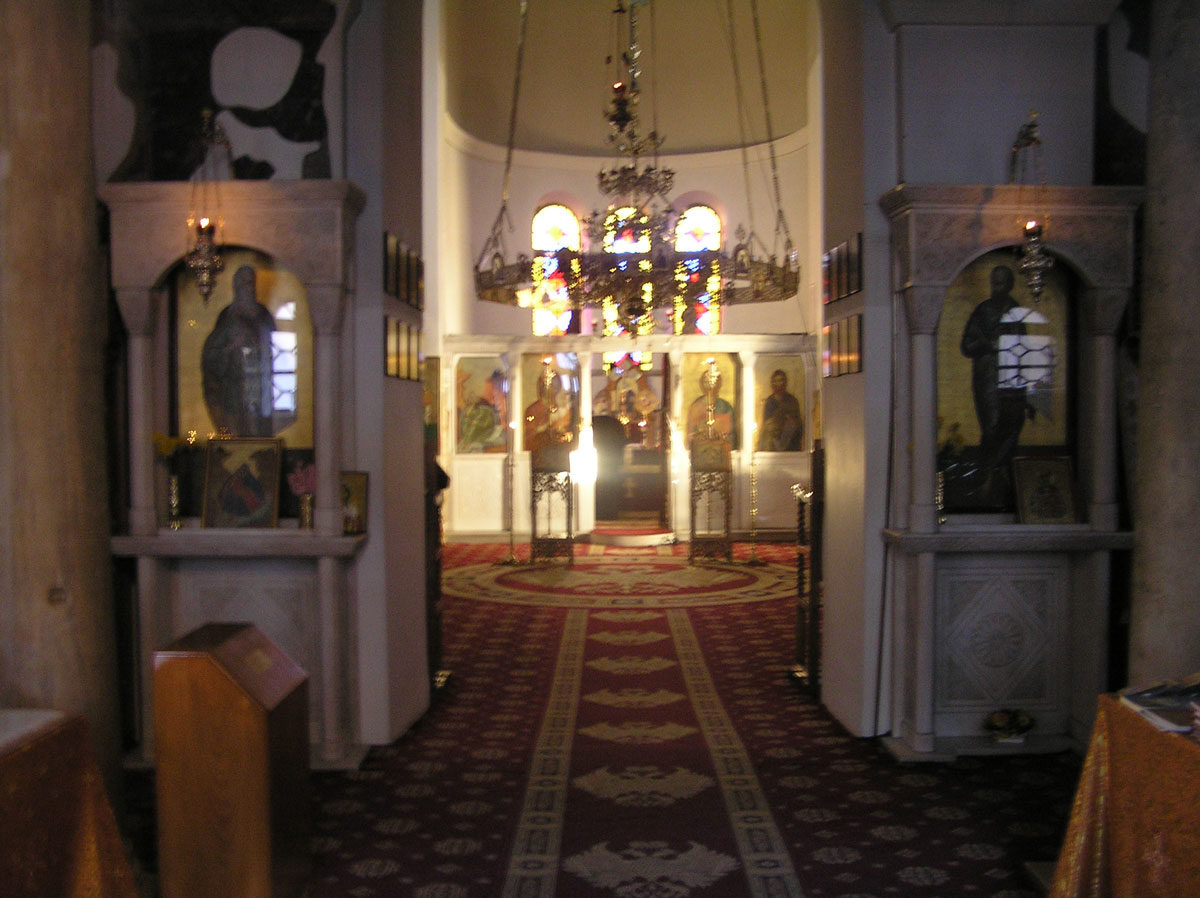 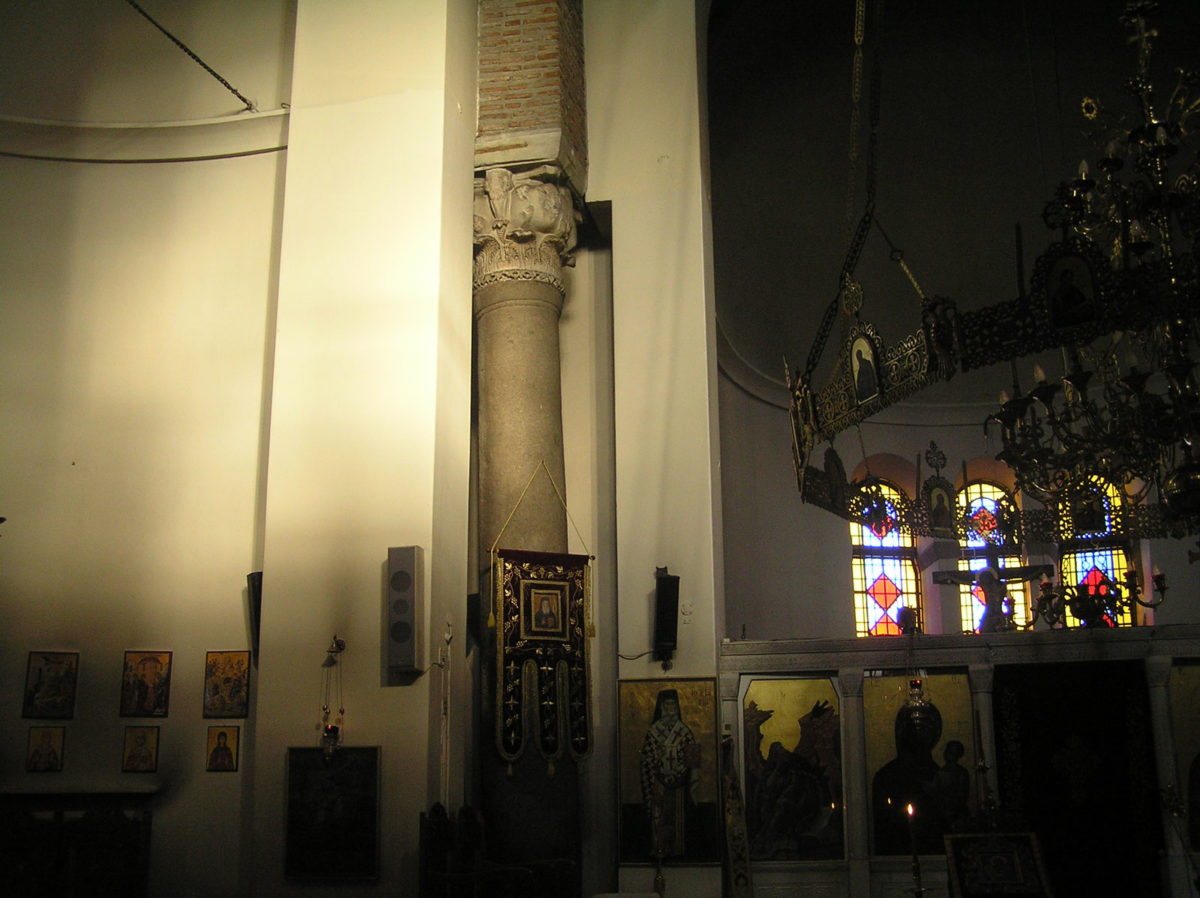 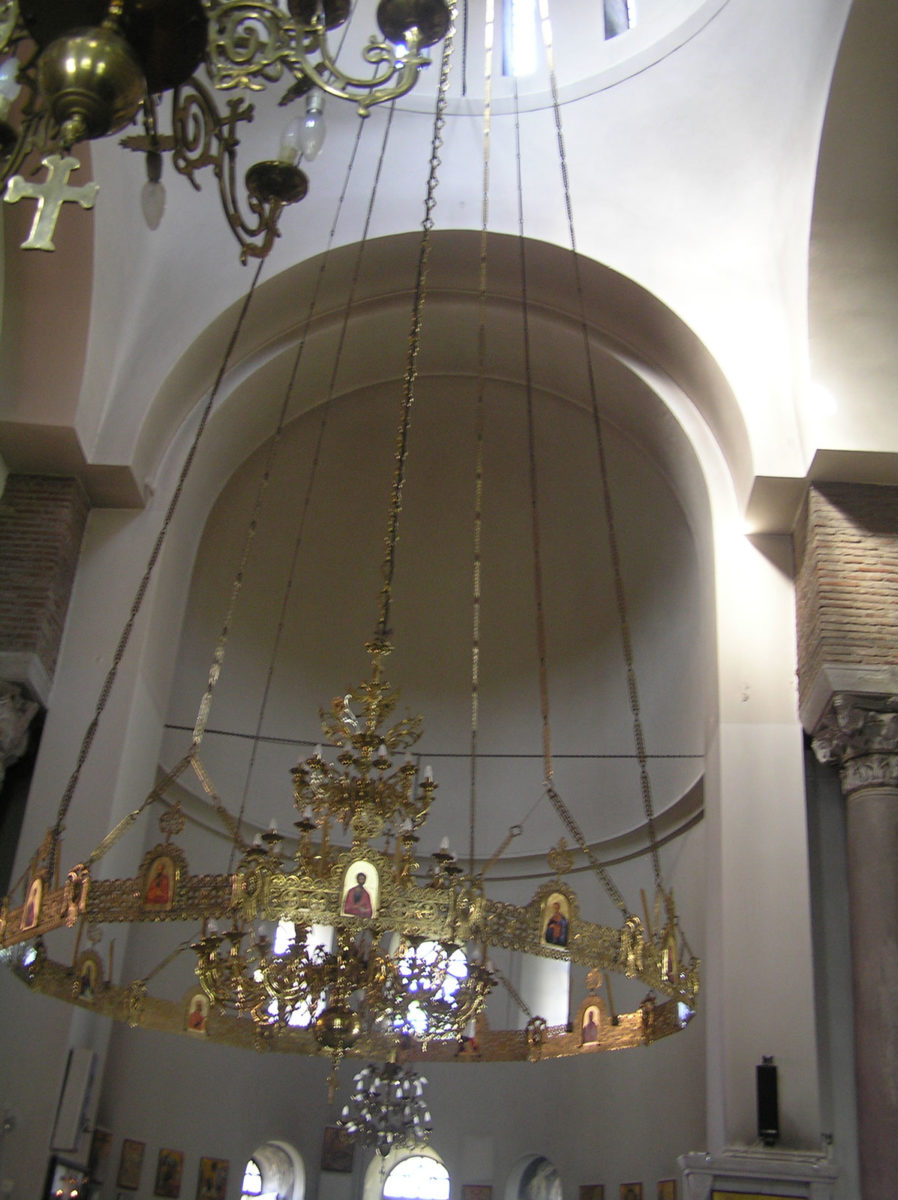 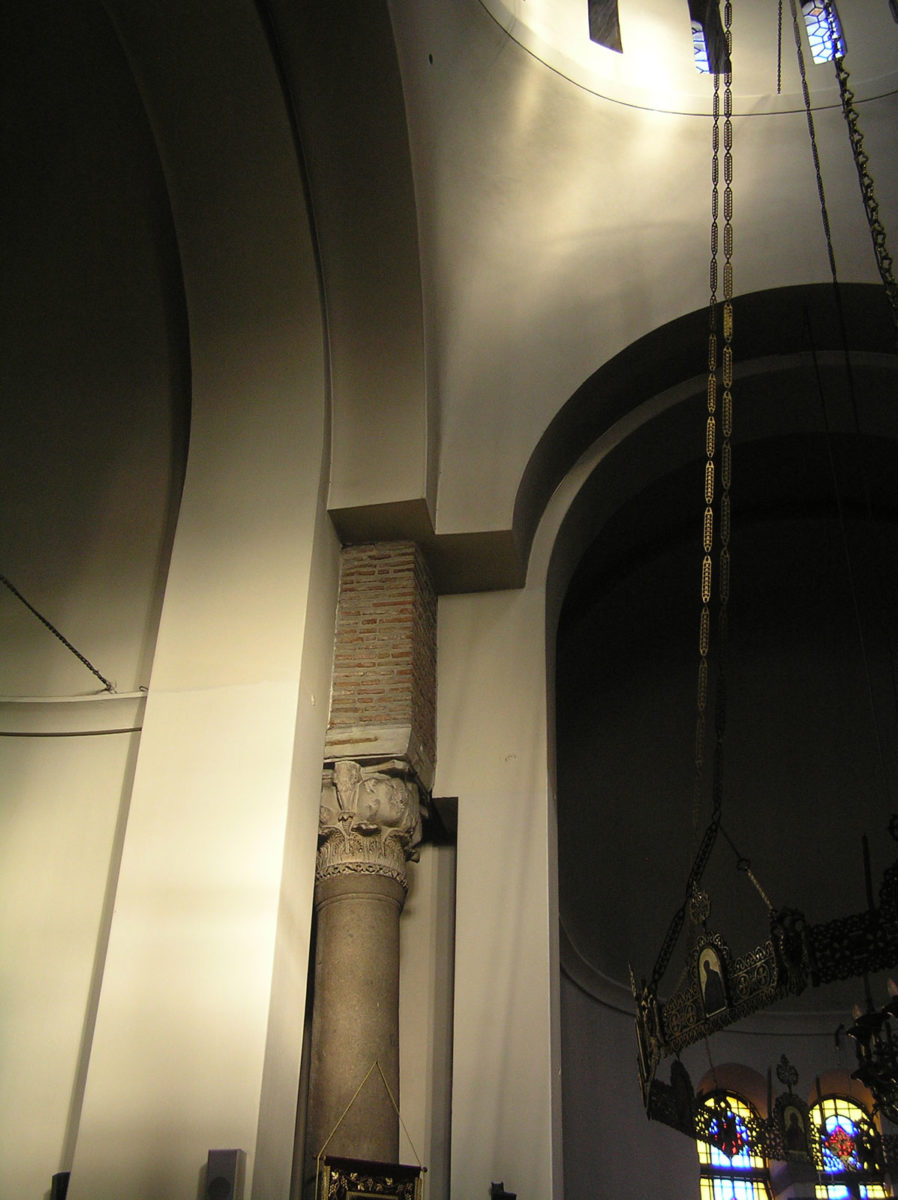 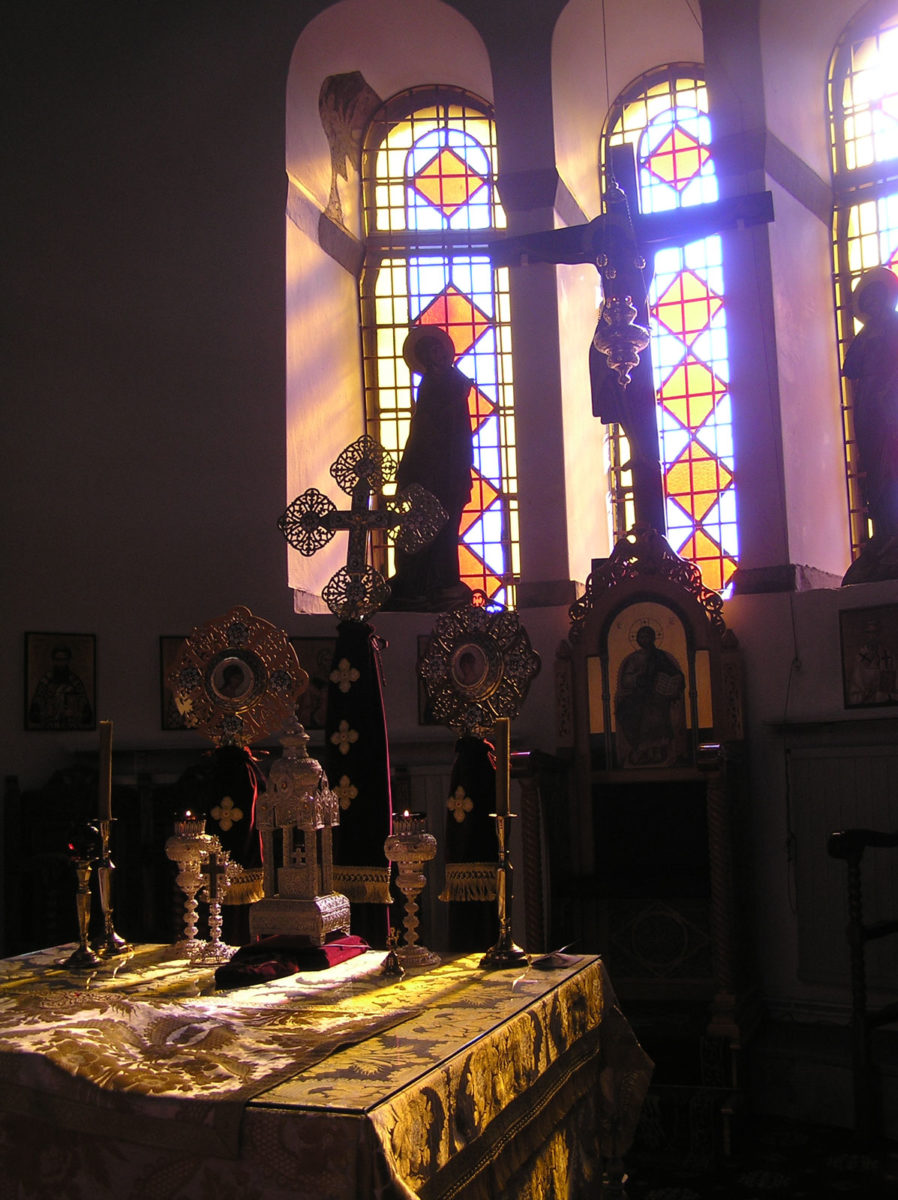 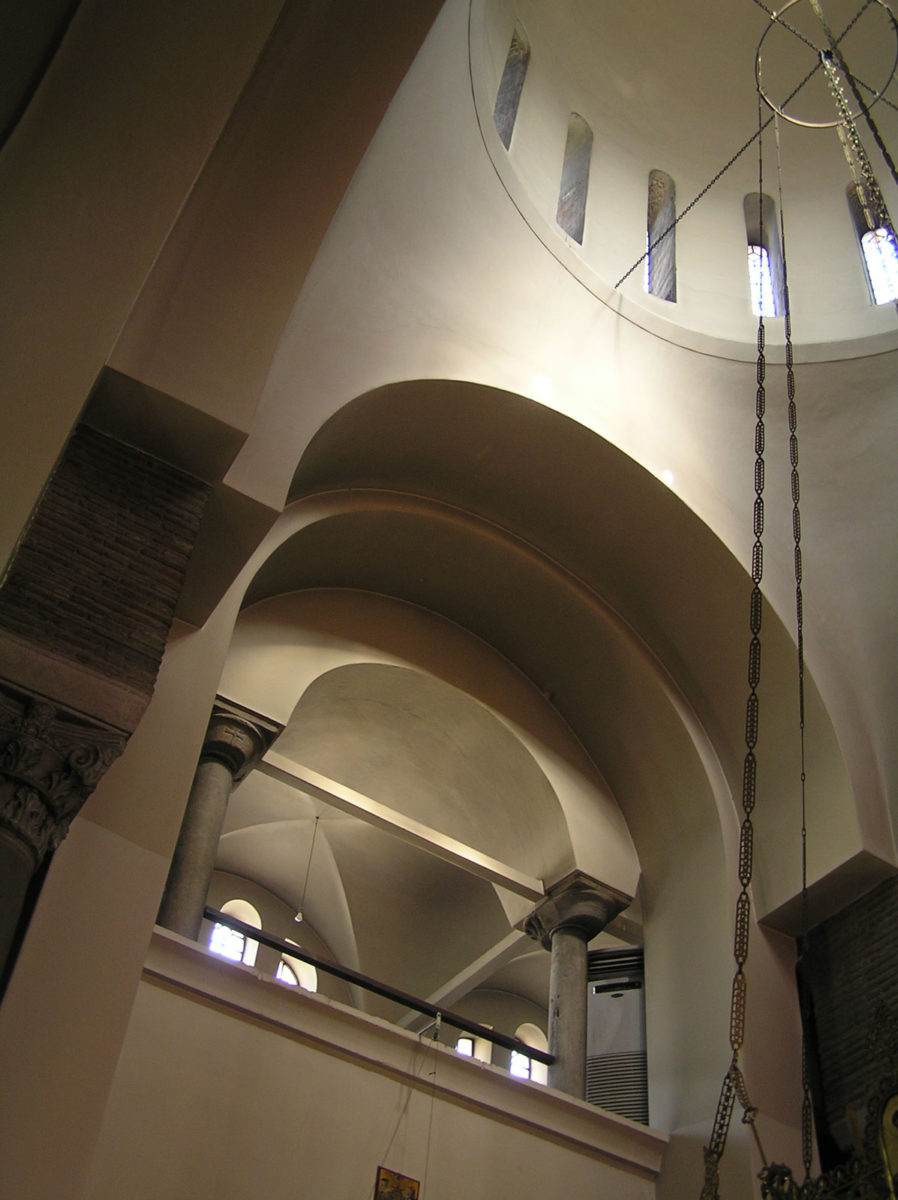 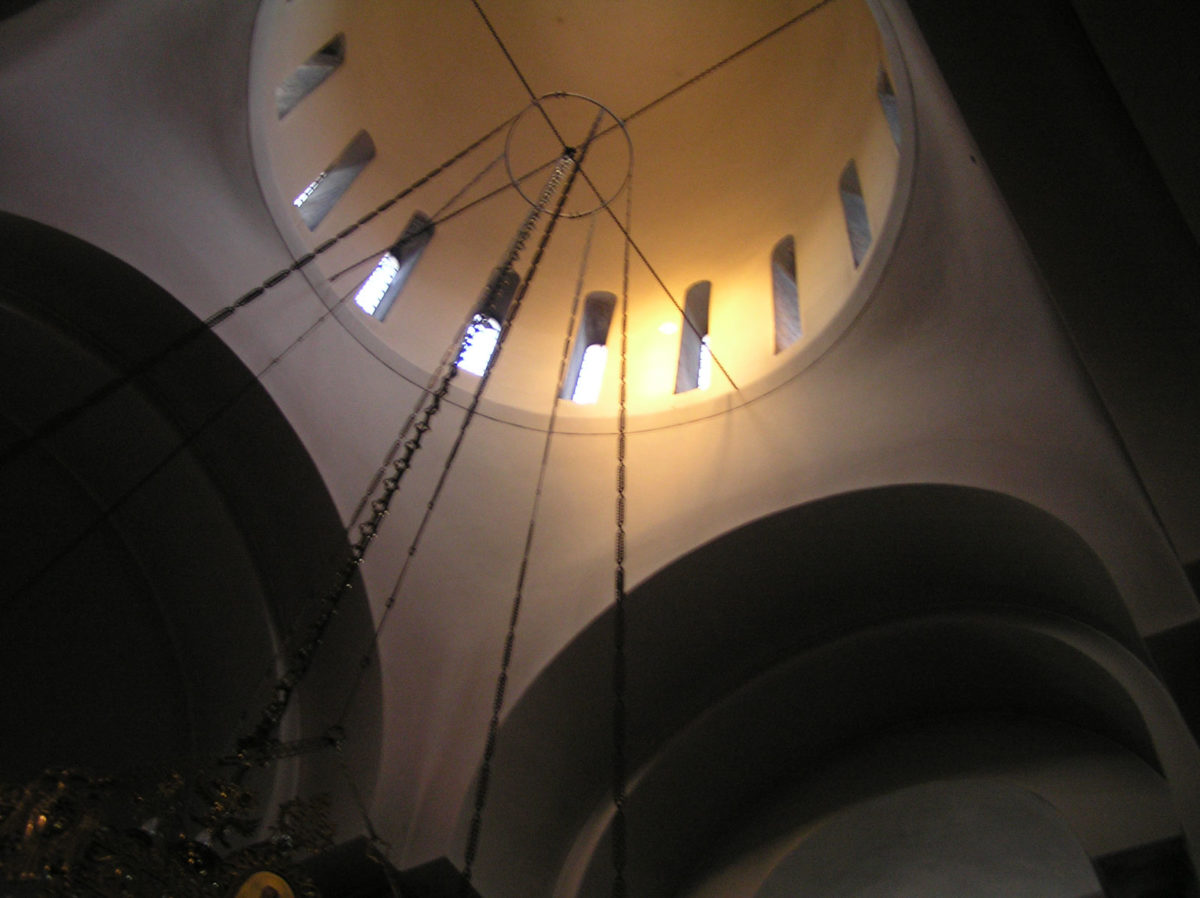 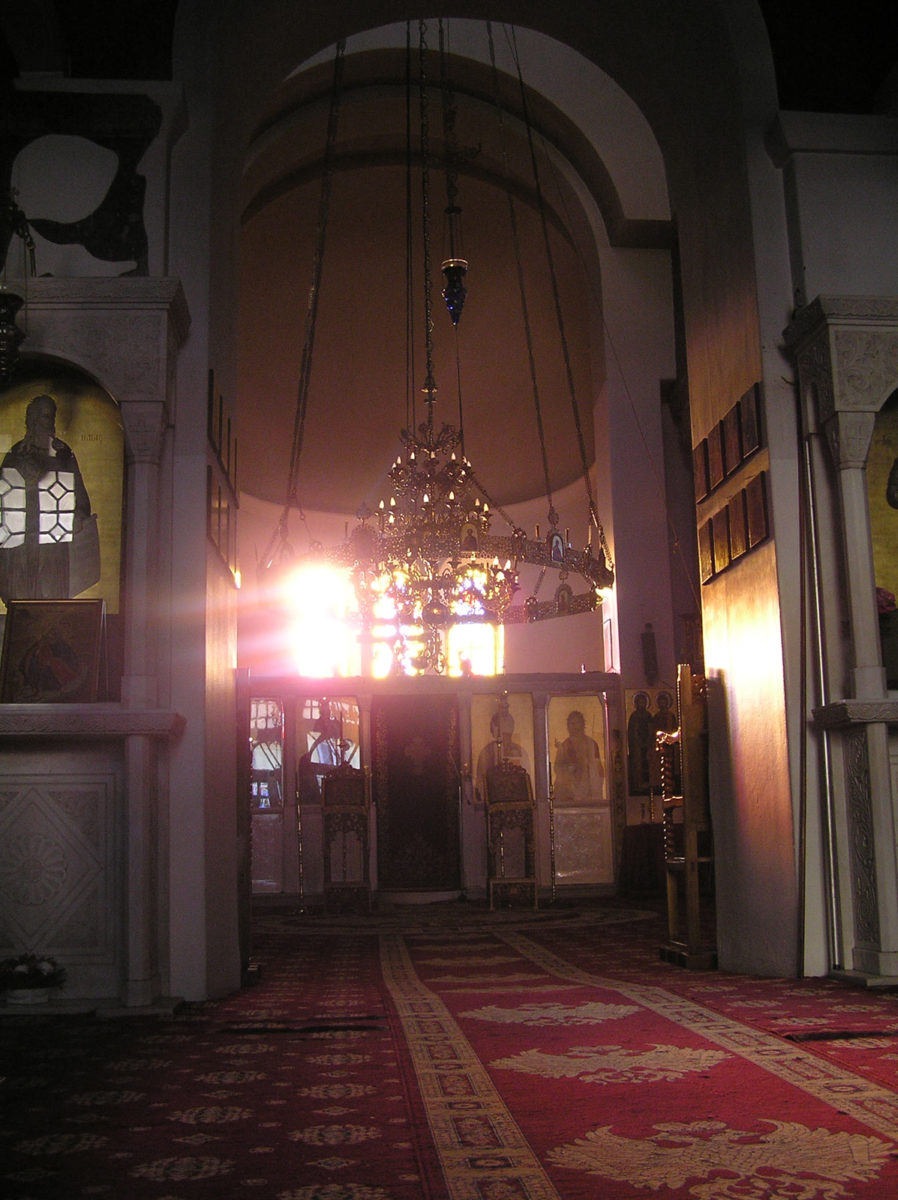 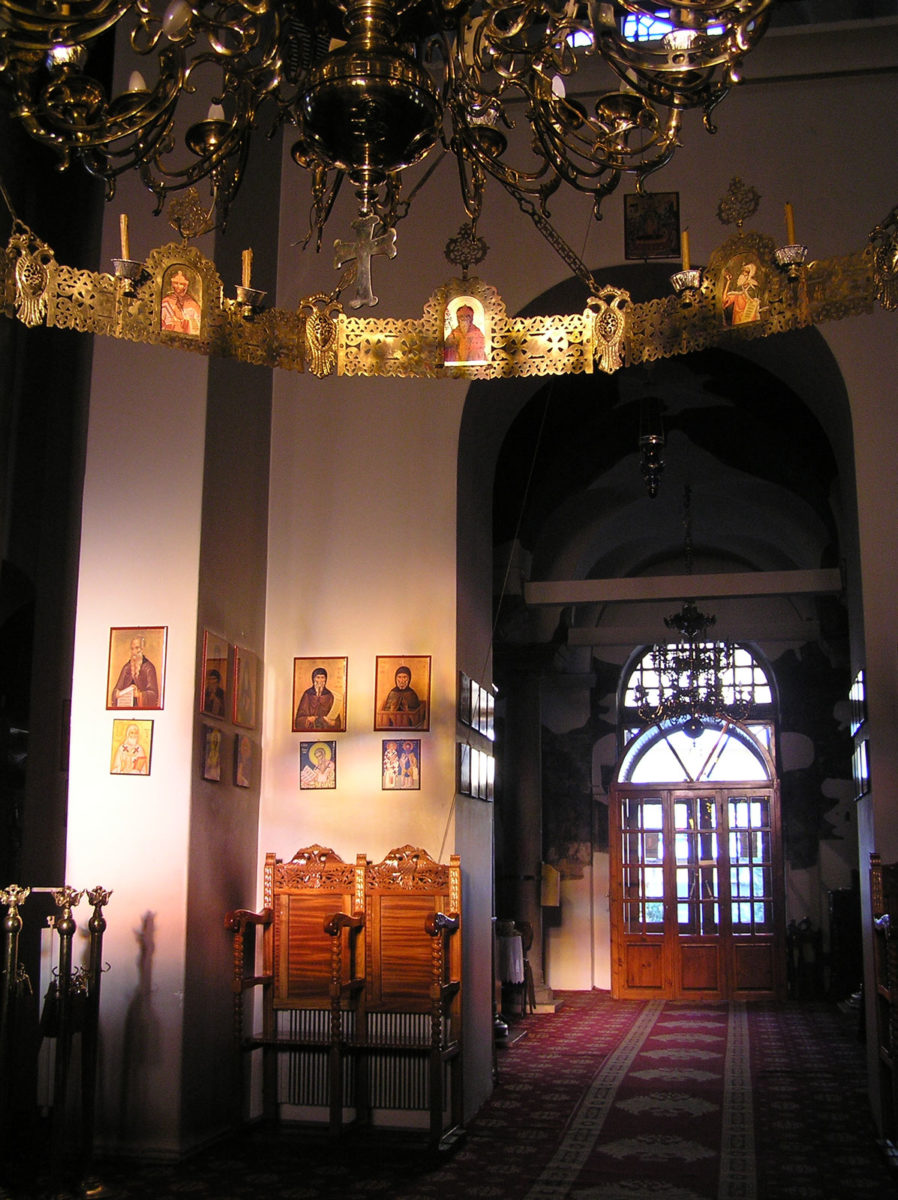 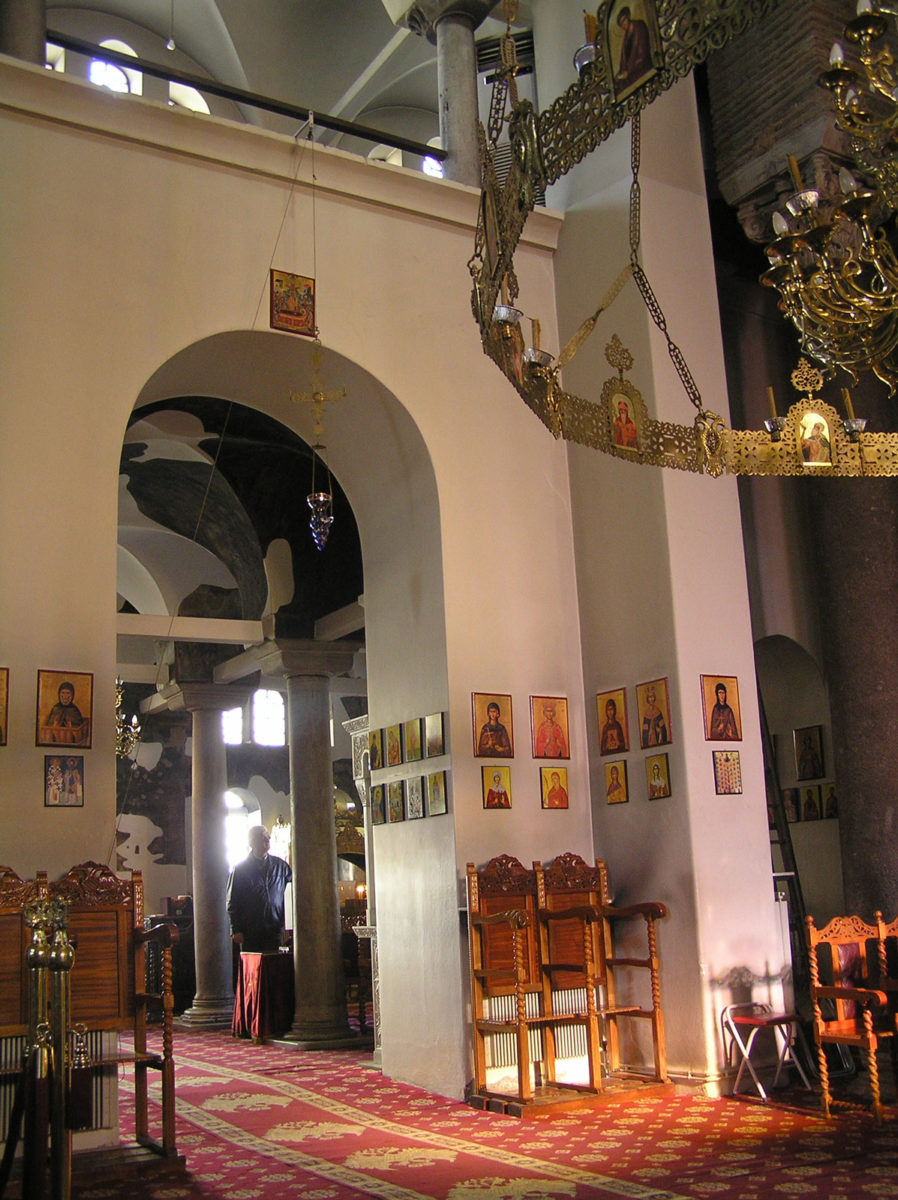 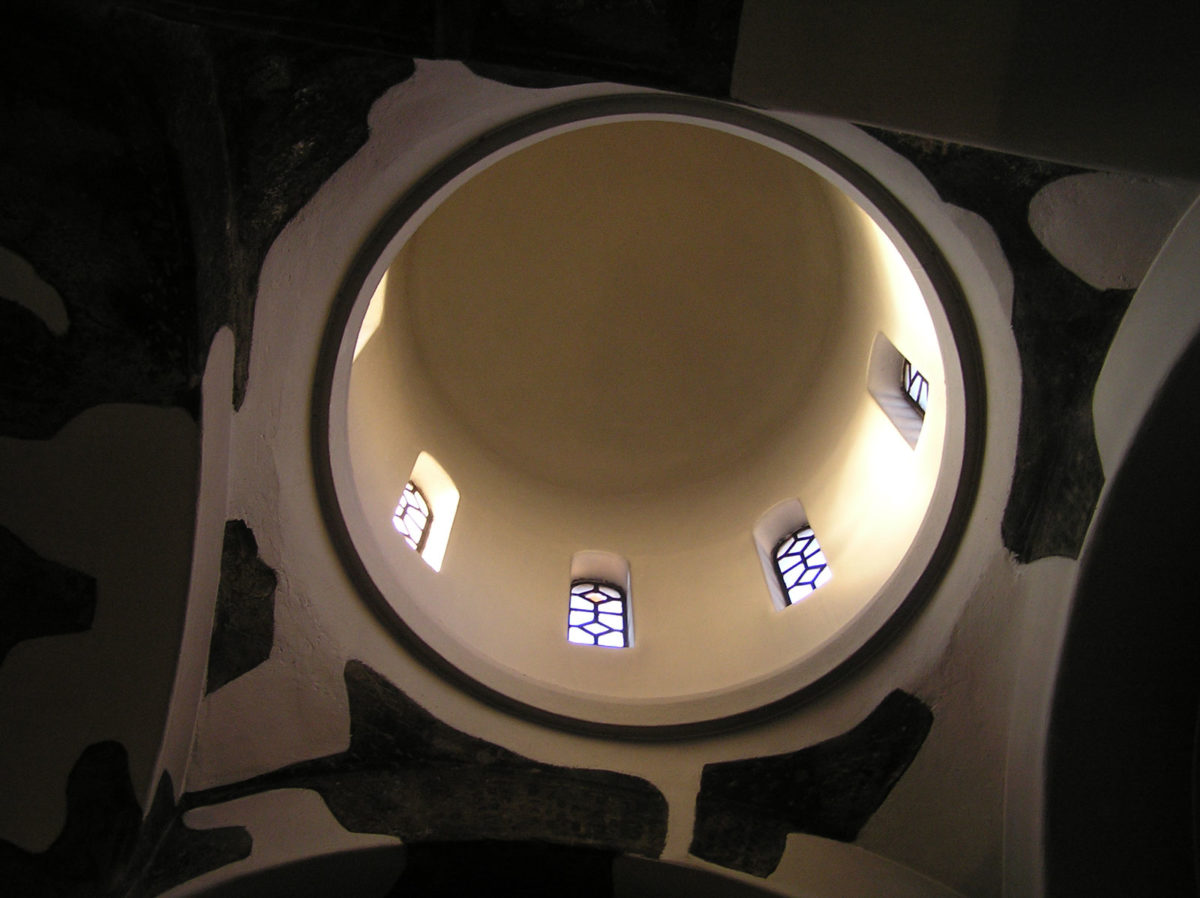 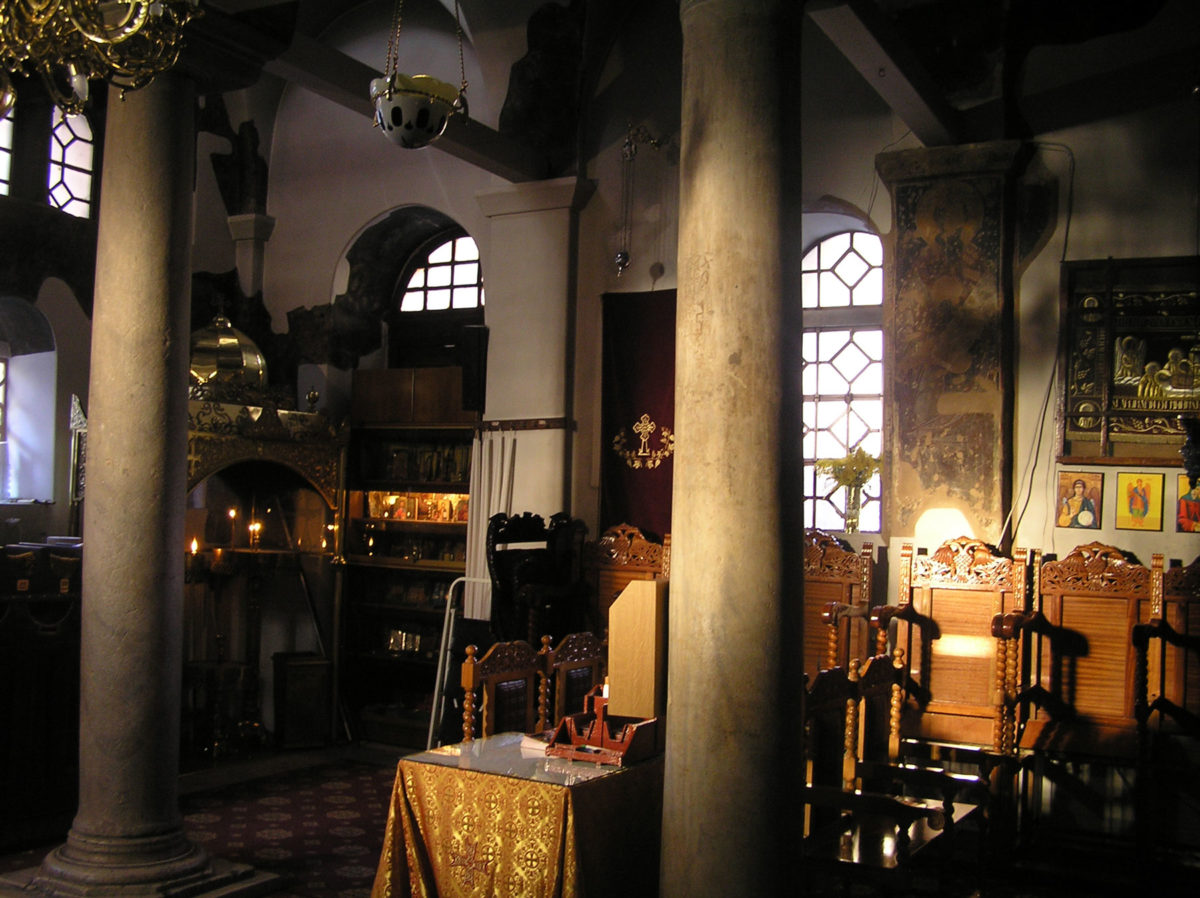 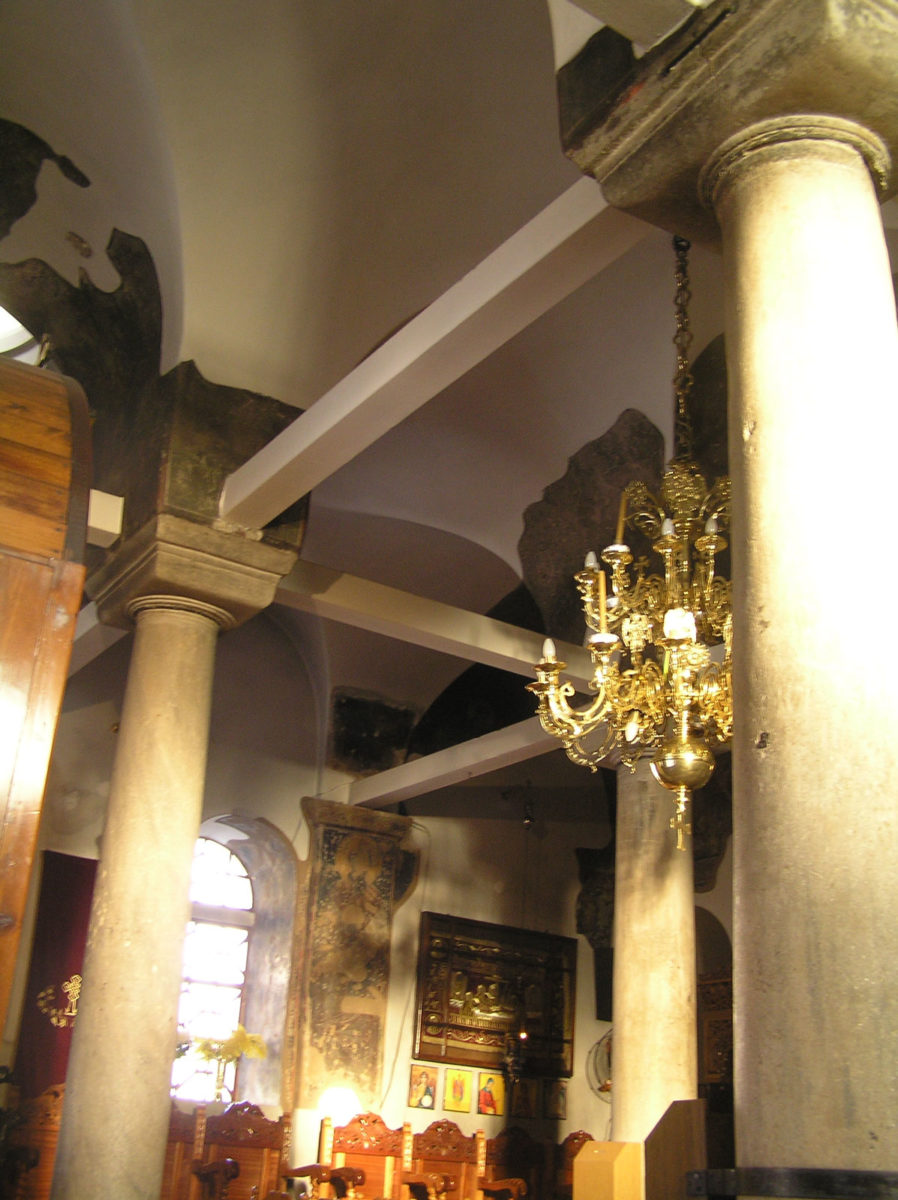 The church of Elijah the Prophet in Thessaloniki

by Ιωάννης Ηλιάδης
Listen up

When talking about the space and ambience of a Byzantine church, it is essential that we take into consideration the lighting. The aesthetics of light in Byzantine churches was structured in a certain way through Christian philosophy, literature and the doctrines by the Fathers of the Church (note 1).

We embarked on our study on the part played by natural light in Byzantine churches with observations and measurements at the interior of a valid number of Byzantine churches (note 2). One of the most important subjects was the church of Elijah the Prophet, or Profitis Ilias (note 3), in Thessaloniki, which was built in the 14th century and was probably the katholikon of a convent (note 4) (fig. 1).

The church of Elijah the Prophet is of the so-called Athonic Type. It was built after the Holy Monastery of Great Lavra which is located at the tip of the Mt Athos peninsula (note 5). Its distinctive feature are the two conches, the so-called choirs, at the northern and southern side of the main church, which seen at a plan have almost the same dimensions as the conches in the sanctuary (fig. 2). At the corners of the main area four columns support the arches on which the large central dome is based (note 6). The monastic character of the building is highlighted by the large space of the lite. On the outside a portico is formed with pillars leading to two triconch chapels with a six-sided dome (note 7).

Excavations conducted by the Ephorate of Antiquities of Thessaloniki City at the area surrounding the church yielded architectural remains of successive building phases, dating from the late ancient Christianity to the Post-byzantine years (note 8).

No detailed plans of the monument are preserved, but, still, the way in which natural light is distributed in the interior of the church is of particular interest. The conclusions that will be drawn from this study will assist in decoding issues of geometric harmony and aesthetics of the church.

In order to study the distribution of daylight we recorded the later interventions that affect the light as well as the trajectory of the sun beams (note 9) in relation to the church’s geometry and the time of observation (note 10).

The church’s insolation depends on the number, dimensions and orientation of the windows. In addition, other significant factors that greatly shape the aesthetics of the space are the quality of the colour of the incoming light through the window structures on the one hand, and, on the other, the light emitted from the figures, the colours and the symbols of the iconography (note 11).

In the Byzantine period, the church of Elijah the Prophet was dominating the area and would have definitely been visible from the centre of the city. Sunlight reached the church unobstructed from sunrise to sunset.

Today, due to the high-rise modern buildings, sun beams cannot reach the church in the morning and afternoon at certain seasons, and the monument is not visible from various locations in the city.

On the windows of the central dome (note 12) common transparent windowpanes were placed that do not affect the colour of the incoming light (fig. 3) (note 13). On the contrary, the colour of the light from the windows of the conch of the sanctuary is altered due to modern coloured windowpanes (note 14), turning from warm white to red tones (fig. 4) (note 15). In the northern and southern conch two rows of windows are formed, three on each row, with transparent windowpanes.

The wall paintings on the dome’s drum, the pendentives, and other parts of the main church are not preserved. The coatings manufactured during the church’s reconstruction in the 1950s are of chalky colour with a high reflection coefficient (note 16).

The high-rise buildings constructed around the monument after 1950 largely block the sunbeams and change the original natural lighting of the church. In particular, in the morning the sunlight is reflected on the outer surfaces of the buildings to the west and enters the church through an opposite direction, namely from the west to the east.

In spring and in summer the reflected morning light is highly intense and reaches the sanctuary.

The main axis of the church is highly oriented to the south at an angle of 135° to the north (fig. 2) (note 17). In terms of geography the orientation coincides with the area west to the Chortiatis massif (fig. 5). The chapels on the four corners of the church are located on the geographic axes East-West and North-South. Of the same orientation are the four pillars of the main church.

The highly southern angle of the church might also be explained by the fact that it was built on an earlier building (note 18), which might have defined its orientation. To further verify this we investigated the placing of the monument on the maps during the ottoman period (note 19). The building is located in the Turkish neighbourhood Eski Saray and on the corner of the streets Ali Yazici (Ioannis Kameniatis) and Eski Saray (Profiti Ilia). The plan shows that the central axis is of a southern bearing, but not exactly the same as the one the church has today (note 20).

Seen at a plan the four columns of the main church form a rectangular square ABCD with a side-length of 7m (fig. 6). The square is inscribed within a circle circumference with a radius of R1=5m which includes all four columns. With the same centre and a radius R2=4.5m a second circle is shaped osculating the inner-to-the-centre sides of the columns. Therefore the columns are included between the two concentring circles R1 and R2. In addition, with the same centre K a third circumference is inscribed with a radius of R3=8.5m, passing through the inner side of the northern and southern conch, through the middle of the chapels and typikaria, and close to the eastern columns of the lite. Within this circle a rectangular square EFGH is inscribed with a side-length of 12m, at an angle, though, of 45° to the initial one. The ratio of the diagonal to the side of the square equals the irrational number √2 =1.41666666… (note 21). If the above radius is stretched all the way to the outer side of the wall on the northern and southern conch, then a fourth circle can be inscribed with a radius of R4≈9.3m including nearly the entire main church.

The same geometric design is repeated in the section crosswise (fig. 7). With a centre K which corresponds to the average height of the church, a circumference of a circle R1 is inscribed which passes through the two points of the floor A and D. On the circumference of the circle a square, ABCD, is inscribed, the sides of which are equal to the width and the height of the church (note 22).

The geometric design of this church was based on older models, such as the temple of Hagia Sophia in Constantinople (note 23) and the katholikon of the Great Lavra convent.

Comparing the plans of the central areas in Great Lavra and Elijah the Prophet we found out the following:

– The diameter of the main dome of Great Lavra is 6m (note 24) and is based on four pillars which designate a rectangle with an inner-side length of 8×7.5m.

– The height of the central dome at Great Lavra (15 m) is lower than the one at Elijah the Prophet (18.30 m). The domes of the two churches have the same number of windows, but are different in shape and dimensions.

– The plan of the katholikon at Great Lavra shows that the distance between the northern-southern conch and the sanctuary-western side conch of the main church equals 17m; at Elijah the Prophet the corresponding distances are 17m and 15.5m.

– At the church at Great Lavra the internal diameter of the three conches is 5m, while at Elijah the Prophet 5.50m.

Natural light in the church (note 25)

Daylight enters the space through the large three-light window of the sanctuary conch, sometimes directly and sometimes indirectly.

In March, at noon, the sun is at a diagonal position southern of the sanctuary and in particular on the axis N-S. Sunbeams enter through the southern windows of the dome and lighten the capital of the northern column, while in May the pedestal of the same column. The divergence in the trajectory of light between March and May corresponds approximately to the column’s height (note 28).

In summer the first sunbeams enter through the eastern windows of the dome and lighten the western pendentive of the dome and the area of the southern conch (fig. 10). In the afternoon the effect is the opposite (fig. 11).

In December (at 08:00) the morning sunbeams enter through the eastern windows of the dome towards the western side of the drum. The light is intense and the dome is filled with light (fig. 14). A little later (at 08:50) the sun is on the central axis of the church. The sunbeams enter through the windows of the conch (note 29), they cross the entire length of the church and reach the western entrance of the lite (note 30) (fig. 15, 16, 17). The main church and the lite are intensely lit. In the afternoon (at 16:30) the sunbeams are directed towards the northern drum of the dome and towards the middle of the northern conch area.

In February, in the afternoon, the light from the western smaller dome of the lite barely contributes to the lighting of the area (fig. 18). On the contrary, the sunbeams entering through the single-light window of the southern entrance of the lite are directed towards its northern side (fig. 19, 20). The area of the lite is filled with light.

The natural lighting of Elijah the Prophet is mainly achieved with the windows on the dome and the large three-light window of the sanctuary conch in combination with the geometric analogies and the orientation of the church.

The sunbeams entering through the windows of the dome are directed towards the western pendentive in the morning and towards the eastern one in the afternoon. The persistence of lighting mainly on the two pendentives is not observed in the churches of the same period as Elijah the Prophet. It would have been interesting if we knew which Evangelists were depicted on the pendentives.

Morning lighting in winter is highly intense, because the sunbeams enter the church through the three-light window of the conch, they cross the entire length of the church and reach the lite and the main entrance. The entire space of the temple is filled with light. The same conditions have been observed in the Rotunda, the church of Panagia Chalkeon and the church of Panagia Kosmosoteira.

With transparent glass panels having been fixed on the dome windows, at the northern and southern conch and coloured glass panels on the windows of the conch of the sanctuary, the viewer has a picture that is significantly variant to the original one. Of course, the fact that no wall paintings are saved in the main temple and no pieces of glass have been found during excavations from the original glass panels does not allow for valid conclusions to be reached regarding the colour of light inside the church.

* Ioannis G. Iliadis worked at the Ministry of Culture – 12th Ephorate of Byzantine Antiquities from 1979 to 2012.

** I should especially thank the Ephorate of Antiquities of Thessaloniki City (9th Ephorate of Byzantine Antiquities) for providing me with the plans of the church and for granting me permission for study.