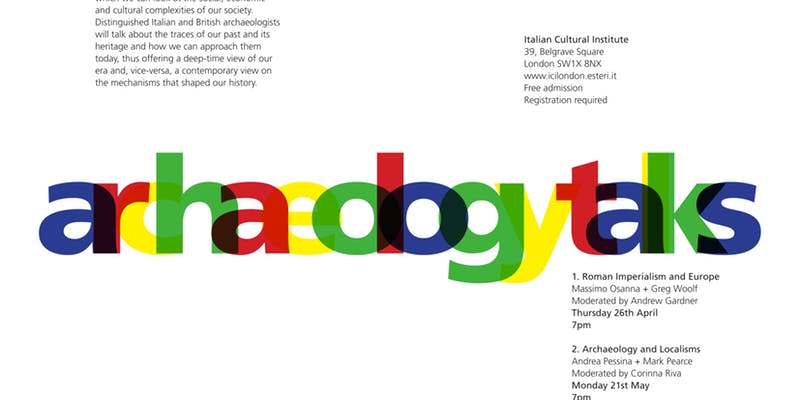 Website
Archaeology Talks is a series of dialogues aimed at considering archaeology as an original perspective from which we can look at the social, economic and cultural complexities of our society.
17 04 '18 09:59

Archaeology Talks is a series of dialogues aimed at considering archaeology as an original perspective from which we can look at the social, economic and cultural complexities of our society.

Distinguished Italian and British archaeologists will talk about the traces of our past and its heritage and how we can approach them today, thus offering a deep-time view of our era and, vice-versa, a contemporary view on the mechanisms that shaped our history.

The first talk explores the relationship between European identities and the Roman empire.

What is the role of ‘peripheries’ and ‘cores’ in creating an imperial identity? Is it possible to compare today’s Britain with its earlier position as one of the frontier provinces of the Roman empire? Which role does Roman archaeology have, if at all, to play in contemporary debates?

Massimo Osanna and Greg Woolf will tackle such questions in the light of a long-term perspective on issues such as empire birth and collapse, globalisation, European identity and nationalism.

Greg Woolf is a cultural historian of the Roman Empire and surrounding regions. He is Director of the Institute of Classical Studies of the University of London’s School of Advanced Study, sits on the British Museum Research Committee and chairs the Council of University Classical Departments. With Jason König at St Andrews he led a Leverhulme project on Science and Empire in the Roman World, and with Jörg Rüpke at Erfurt he leads a collaborative project on sanctuaries and their place in the formation of religious experience and knowledge. He has written extensively on cultural dimension of the expansion of the empire, on Roman imperialism, Roman economy, and on Roman intellectual culture.

Corinna Riva is Senior Lecturer in Mediterranean Archaeology at UCL, specialised in East-West interaction and comparative archaeology of Iron Age and 1st-millennium BC Italy and Mediterranean. Among her publications: The urbanisation of Etruria: funerary ritual and social change, 700-600 BC. New York: Cambridge University Press.